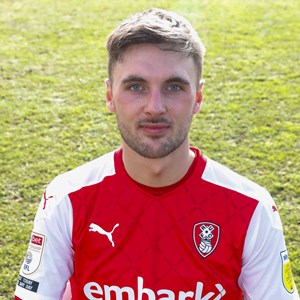 Lewis Wing arrived at AESSEAL New York Stadium on deadline day, joining on loan until the end of the 2020/21 campaign from Middlesbrough.

Wing arrives to add competition in Paul Warne’s engine room, which already has the likes of Dan Barlaser, Shaun MacDonald, Ben Wiles, Matt Crooks and Jamie Lindsay vying for a place in the middle of the park.

The 25-year-old joined Boro in the summer of 2017 after impressing with Northern League side Shildon outside of the EFL pyramid. Wing was prolific during his time with the Railwaymen, hitting 30 goals in 2016/17 campaign, which bettered his efforts of the previous year in which he netted 22 times and helped them to their first Northern League title in 70 years.

After impressing for the U23s, he made his Boro debut in August 2017, coming on as a second half substitute during a 3-0 win over Scunthorpe United in the second round of the Carabao Cup.

The midfielder was sent out on loan in January 2018 to further his footballing development, enjoying a temporary switch to Yeovil Town in Sky Bet League Two, where made 22 appearances for the Glovers, scoring three goals.

He cemented his place in the Boro first team picture in 2018/19, finishing the season with 34 appearances and earning the Goal of the Season award for his strike against Premier League side Crystal Palace in a League Cup tie in November 2018.

Wing continued to enhance his reputation for having a long-distance goal in the locker as he scored another superb strike on the opening day of the 2018/19 season, as Middlesbrough drew 3-3 with Luton Town. It was the first of seven goals in total that season, a career best for the midfielder at senior level, who went on to make 41 appearances in all competitions.

The Newton Aycliffe-born midfielder has featured 15 times in all competitions so far this campaign, including a substitute appearance against the Millers in a 3-0 win for Paul Warne’s side last week. He netted a brace for Boro as recently as the 19th December, in a 4-1 win at Birmingham City.