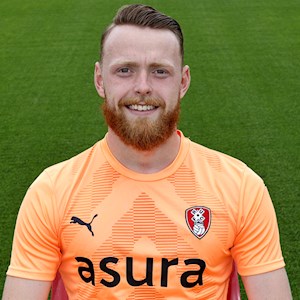 Swedish goalkeeper Viktor Johansson was snapped by Millers manager Paul Warne in September 2020, following the expiration of his contract with Premier League side Leicester City.

The 21-year-old rose through the ranks at boyhood club Hammarby in his native Sweden and quickly built and impressive reputation, attracting the interest of Aston Villa who snapped him up to join their Academy.

He spent four seasons at Villa Park before making his move across the Midlands to join Leicester City’s development squad.

Johansson has been a regular presence in the Foxes under-23s starting line-up, helping City to second place in their most recent Premier League 2 Division 1 campaign before the suspension of football in March.

He has also earned recognition at international level with his native Sweden, who he has represented at U21 level, making his debut against Scotland in March 2019.

His performances for Leicester caught the attention of Rotherham United boss Paul Warne who moved to secure his services ahead of his side’s upcoming 2020/21 Sky Bet Championship campaign.

The Swede's maiden season in South Yorkshire saw him become a cult hero with the supporters, despite him having never played in front of them due to the coronavirus pandemic restrictions.

Having earned his place between the sticks in the Sky Bet Championship in November 2020, Johansson turned in a series of accomplished and brave displays - two of which saw him sustain head injuries for his troubles - which endeared him to the Millers fans watching from afar.

Viktor was part of a goalkeeping department which kept a club-record tally of 27 clean sheets throughout the 2021/22 campaign, which ultimately saw the Millers claim automatic promotion to the Sky Bet Championship and win the Papa Johns Trophy.