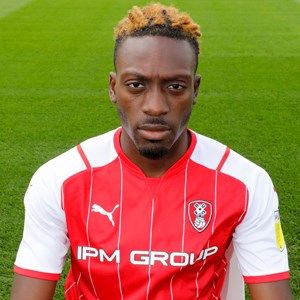 The 26-year-old enjoyed a productive spell in front of goal in League One in the season prior to his arrival at AESSEAL New York Stadium, despite Argyle’s relegation – netting 19 times in all competitions.

Ladapo shares a similar career path to the manager who signed him, Paul Warne, having cutting his teeth in non-league before entering the professional ranks.

After leaving Colchester United early in his career, the Lagos-born hitman starred for the likes of Kidderminster and Margate where he attracted interest from a host of clubs.

He earned a big move to Crystal Palace in 2016, and whilst at Selhurst Park he earned further experience with loan spells at Oldham and Shrewsbury.

A permanent move to Southend in 2018 was followed by move to Plymouth.

His career took off again at Home Park where he bagged a hatful of goals despite the Pilgrims being relegated on the final day of the season.

Ladapo continued his ruthless form infront of goal into the 2019/20 campaign, firing the Millers to promotion from Sky Bet League One with 17 league goals.

The forward relished the opportunity to try and continue his goalscoring form at the next level and did so admirably, finding the net nine times in total in the Sky Bet Championship, despite a number of his appearances coming from the substitutes' bench.

Not only did he find the net with regularity, but also 'made a name for himself' with a historic stoppage time winner at Hillsborough which secured the club's first ever league double over Sheffield Wednesday.