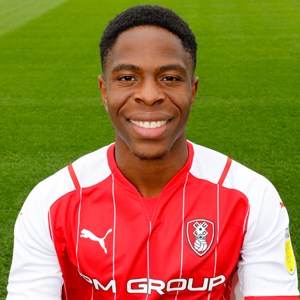 Paul Warne secured the services of pacy winger Chiedozie Ogbene on the 29th August 2019, with the 22-year-old penning a three-year deal after joining from Brentford for an undisclosed fee.

Born in Nigeria, Ogbene then moved to Ireland with his family aged eight. After representing Everton as a youth player, he signed for Cork City in August 2015 and he spent 18 months there, winning the FAI Senior Challenge Cup in 2016.

Limerick was his next destination and he was an ever-present during their 2017 League of Ireland Premier Division campaign, alerting interest from clubs in England, cue Brentford swooping to secure his services in January 2018.

The youngster found it difficult breaking into the Bees' first team and he spent half of last season on loan at Sky Bet League Two Exeter City before making a handful of appearances upon his return to Griffin Park.

He quickly established himself as a fans' favourite during the 2019/20 campaign as the Millers won promotion to the Sky Bet Championship.

Having worked so hard to prove himself with the Millers and earn plenty of plaudits in the process, few deserved a crack at the Championship as much as Ogbene.

Heartbreakingly, an innocuous turn in a training session caused a long-term injury meaning that he was forced to sit out of the action from late September 2020 until April of the following year.

However, he showed no signs of losing his ability upon his return at the back end of the 2020/21 campaign as he looked to make up for lost time with a number of appearances off the bench and a stellar performance in the starting XI again Barnsley at Oakwell.