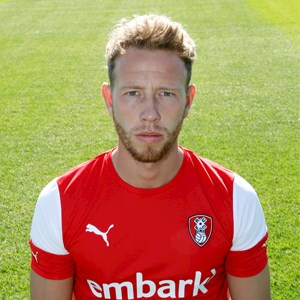 Adam Thompson made the switch to the AESSEAL New York Stadium on the 27th August 2019 following his departure from Bury, and the defender signed a two-year deal to keep him at the club until 2021.

Having started his career on the books as a youth player at Watford, the defender went on to make a handful of appearances for the Hornets during a four-year stay at the club.

During that time, he also spent some time away from Vicarage Road, representing Brentford, Wycombe Wanderers, Barnet and Southend United on loan.

After impressing for the latter of those four teams, he signed a permanent deal at Roots Hall and he went on to make a century of appearances between 2014 and 2017 before joining Bury.

He then moved to Bradford City on loan in 2017/18 before earning his place in the Bury team upon his return to Gigg Lane, and he was a key figure as the Shakers won promotion from Sky Bet League Two last season.

As a player who has also represented his country on the international stage, Thompson is confident that he can provide Paul Warne with another solid option in the heart of defence.