Rotherham United would like to wholeheartedly thank Kevin Lambert and the rest of the Lambert family for their incredible generosity in donating £1,400 to the Millers Memory Club.

Everyone at the football club was deeply saddened to learn of the passing of our former player and League Cup finalist, Roy Lambert, who sadly passed away aged 88 in February, following a battle with dementia.

His family were invited to AESSEAL New York Stadium for our home game with Wigan Athletic, as we paid tribute to the former defender with a minute’s applause prior to the match, a tribute impeccably observed by both teams.

Roy was a regular at our Millers Memory Club meetings, a group made of ex-players, staff, members of the public and an excellent team of volunteers, providing anybody in our local community who has encountered degenerative memory diseases such as Alzheimer’s or Dementa with a save environment to chat about their experiences.

We are incredibly grateful to Roy’s son Kevin and the rest of his family, who have made an incredibly generous donation of £1,400 to help the initiative continue to grow. 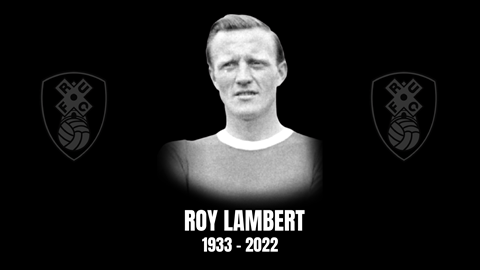 Honorary Life President John Breckin has championed the Millers Memory Club alongside a number of former players and spoke of his gratitude to Kevin and Roy’s family for their kindness.

“I would like to say a huge thank you to Kevin and the rest of the Lambert family for their incredible generosity and kindness," he told www.themillers.co.uk.

“Roy is fondly remembered here at Rotherham United for his fantastic service to the football club and will forever have his place in Millers folklore, as an integral member of the 1961 League Cup Final side. ­

“Having so sadly seen many of our former players suffer with illnesses of this kind, we have been striving to provide an environment in which people can come and get some support and the money donated by Roy’s family will go a long way to helping us further grow this fantastic initiative."

“We’re really pleased with the progress we’re making, it’s for a great cause and one that I know will provide a lot of help for so many people.

“We have lost so many ex-players and friends to diseases like Alzheimer’s and Dementia and I know how greatly it impacts people’s loved ones, so for Kevin­­­­­­­­­­ and the Lambert family to donate to help our cause so that we can continue to support those who need it, is incredibly touching.”