If you’re feeling ‘stumped’ without your Rotherham United fix over the summer months, fear not, the legendary John Breckin has you covered by hosting another charity cricket game in aid of the Rotherham Hospice – an event which is not to be ‘bailed’ on!

Breck has once again declared that Paul Warne and his Millers players will assemble shortly after their return to 2022/23 pre-season training for the hugely-popular charity cricket clash at Wickersley Old Village Cricket Club, from which all funds raised will go to supporting the Rotherham Hospice.

This year’s summer cricket fixture has been booked into the diary for Friday 24th June with stumps at around 5pm.

With the pandemic meaning that we were still mitigating risks regarding public appearances for our first team players last time this game took place, John called upon the help of the legends of Millers teams gone by to create an ‘Allstars’ team – which included first team boss Paul Warne, Richie Barker, Matt Hamshaw - as Umpire! - and Andy Warrington. 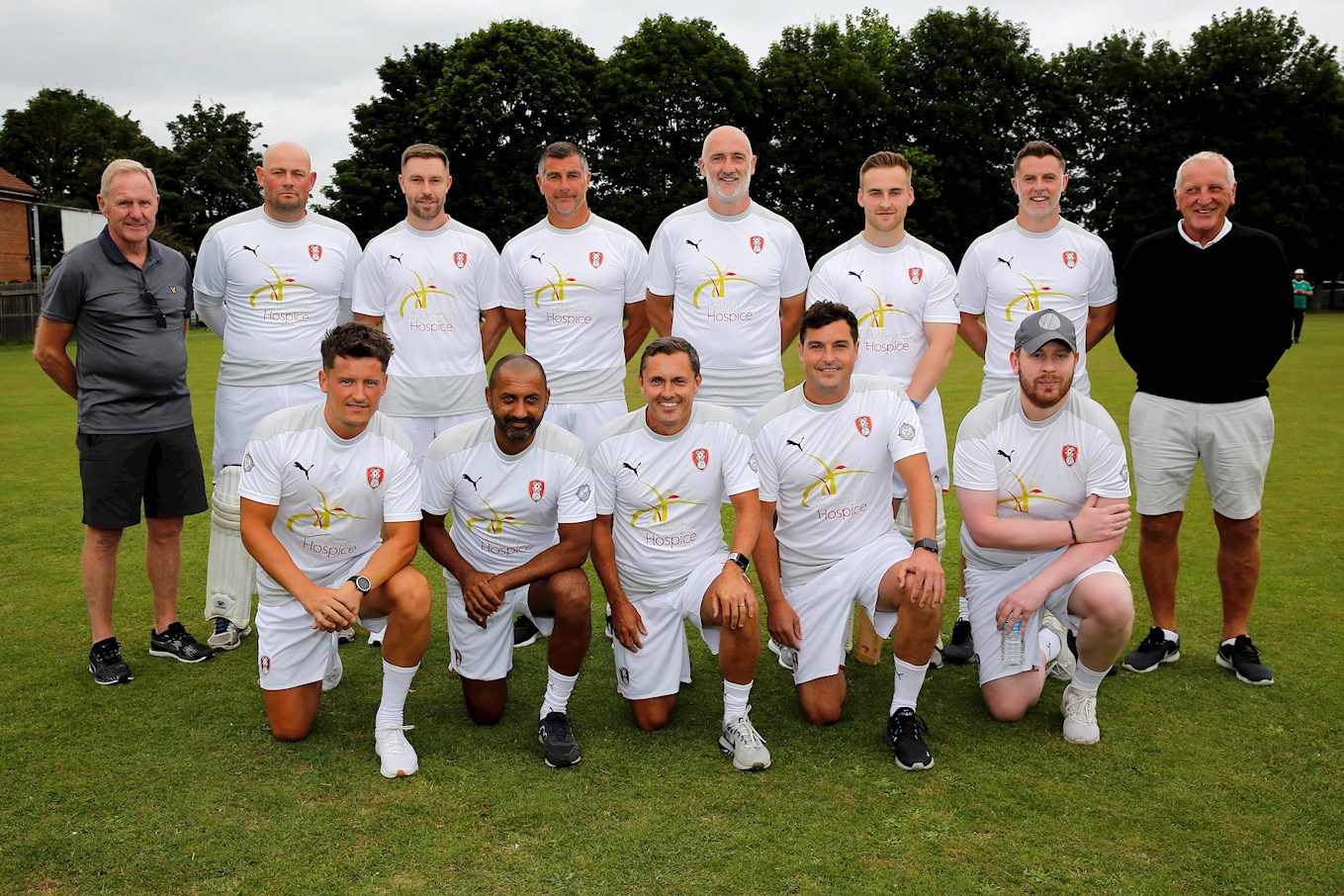 The Millers 'Allstars' team from last season: (Left to right)

However, we are delighted to confirm that this year, members of the current team will once again be in a position to don the pads as part of another huge charity effort.

Not only will this provide supporters with an early glimpse at the players who will be representing the Millers in the Sky Bet Championship this season – including any potential new signings who may have arrived by that time - but also with the chance to meet them and get signatures on the night.

Breck – who is definitely an all-rounder when it comes to Rotherham United – steered his Allstars team to Hospice Cup victory last season in another epic battle between the Millers and our friends at Wickersley OVCC and will be looking to build on that success this year. 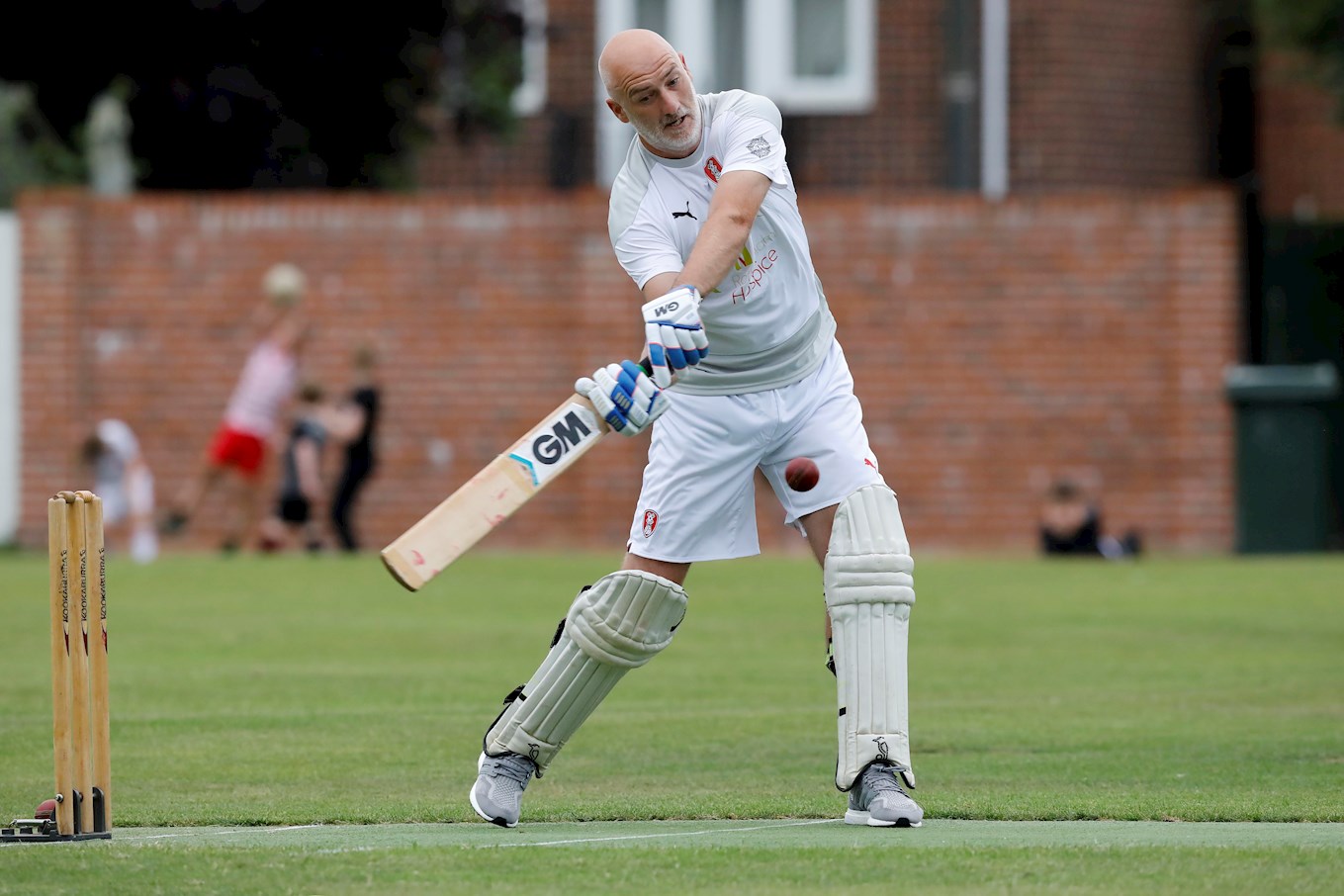 Of course, the on-wicket result pales into insignificance aside the real reason that we are all there, to support a wonderful charity so close to the hearts of many people within the town.

There will be no entry fee on the gate, instead, there will be a ‘donations box’ for those attending to ‘pay what they like’ for entry to what promises to be another fantastic fundraiser organised by the legendary Breck and supported by Paul Warne and his first team staff and players.

Following the success of the same initiative last time out, the special Puma Teamwear shirts which have been sponsored by Burrows Toyota, ‘W’ Restaurant and Broadsword, will be up for sale after the final innings, with all proceedings going to the charity.

Also provided on the night will be a full cash bar, serving alcoholic and non-alcoholic drinks, a bbq (dependent on the weather) and the famous Pukka Pies, which will once again be supplied by our friends at Eric Twigg Foods.

Adam Nicholson and Phil Cooper of PA Entertainments have once again volunteered their services for a good cause and will provide the tannoy and music on the night.

Taking the time out to speak to www.themillers.co.uk amidst the organisation of this summer’s charity cricket clash, John Breckin once again expressed his gratitude to the club’s Chairman Tony Stewart and the first team manager Paul Warne for making the players available to support the hospice, but also everyone involved in getting the event up and running again this year.

“The people here from the Chairman down understand how important the club’s role in the community is and their enthusiasm for supporting charities – but particularly the hospice – is as strong as it has ever been."

“We had to go down a slightly different route last year and enlist the help of some of the ‘Old Guard’ for my Allstars team with the pandemic meaning it wasn’t really sensible to have the players on-site in a crowded area, and whilst it was a brilliant night and we raised a lot of money, it will be great for everyone to have the first team back this year.

“We obviously don’t know who will be here and who we might have signed before the big day comes around, but I know within the group as it stands we have some really keen cricketers, who can’t help but let that competitive edge sneak in – put it this way, the Wickersley lads always know that they have been in a game!

“That leads me on nicely to once again thanking everyone involved from outside of the club that plays such a big part in the event, and without whose kindness, it just wouldn’t be possible.

“To namedrop a couple, we have Wickersley Old Village Cricket Club – who will obviously host us and provide us with an opponent – Burrows Toyota, the ‘W’ restaurant – where the lads will have a meal before coming over to the game – PA Entertainments and Broadsword – who are responsible for making the shirts that the lads wear to play in look so smart on the night."

“I am always crossing everything that our beloved South Yorkshire weather provides for us and I am sure it will, but whatever the conditions, I know it is going to be a great night, which raises a fantastic amount for the Rotherham Hospice.”