Rotherham United boss Paul Warne has been crowned the Sky Bet League One Manager of the Month for February, with the Millers maintaining their position at the head of the pack with a series of important results.

The Millers manager steered his side to six wins from their seven Sky Bet League One fixtures, including South Yorkshire derby successes over Doncaster Rovers and Sheffield Wednesday, whilst the draw came in the form of a hotly-contested first versus second battle at AESSEAL New York Stadium against Wigan Athletic.

Warne’s efforts have been recognised by the wider football community this season, having been nominated for the award on more than one occasion in 2021/22, but this time gets his hands on the trophy for his side’s performances throughout February.

With a hectic schedule to confront, Warne rotated his side and guided the League One leaders to 19 points from a possible 21, finding a way to win in difficult moments, but still scoring 13 and conceding just a single goal in seven games.

Warne said: "I am grateful on behalf of the club to take it, but I don't walk on the pitch, I don't keep them fit in the gym and I don't coach them as much as Rich [Richie Barker] and Hammy [Matt Hamshaw]. 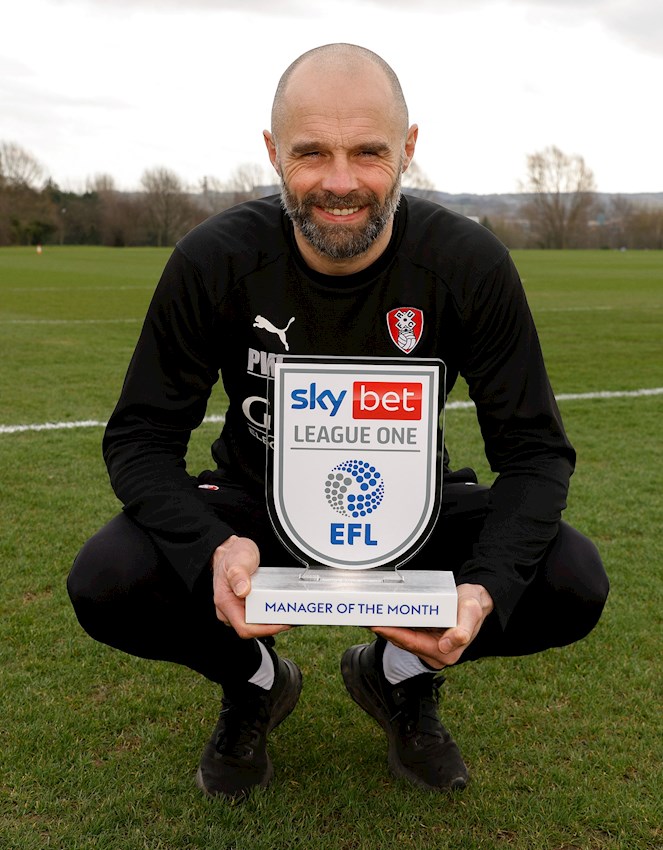 "I appreciate it is my name above the door but it doesn't feel like an honour for me, it is a trophy for everybody at the club and that must mean that we're doing something right - which is good."

"In the same way when Smudge [Michael Smith] got his Player of the Month, I wasn't doing cartwheels for him either because I think it is a team game and Smudge can only score goals if the lads get the ball up to him and we can only win games if the goalkeepers keep clean sheets.

"In February, the club got the Manager of the Month award, but my goalkeeper would have been as fitting a person to give it to as me."

“Terrific consistency from Paul’s team throughout a demanding February."

“Seven games played, 19 points from a possible 21 and only one goal conceded in the process, Warne strengthened Rotherham’s position at the top of League One.”

Sky Sports’ EFL pundit Don Goodman said: “After a dominant February, Warne’s side sit top of Sky Bet League One with a third promotion from League One firmly in their own hands.

“A run of six wins and a draw was made all the more impressive that three of those seven opponents are also chasing promotion to the Championship.”

Sky Bet EFL trader Ivor Davies said: “February saw Rotherham go as short as 1/6 for the title from 5/4 at the start of the month before last Saturday’s surprising loss at home to MK Dons.

“We still have The Millers rated as League One’s best team, but we’re slightly concerned about some of the injuries that Warne will have to deal with now that Ladapo is out for at least a month.

“We have Rotherham at 8/13 for the title now versus Wigan at 5/4 and MKD at 18/1 so it’s very much game on, especially if Wigan can win both their games in hand.”

A full list of the managers who have won the awards across the EFL can be found below: