Rotherham United started life back in the Sky Bet Championship with a hard-earned draw against highly-fancied Swansea City following a pulsating encounter at the AESSEAL New York Stadium.

The Millers fans were dreaming of an opening day victory when man-of-the-match Chiedozie Ogbene put them ahead with a nodded finish but Harry Darling, who netted for MK Dons on the same ground last season, dashed home hopes with a fantastic long-range strike.

The home fans had their first competitive viewings of three summer signings on their New York return.

Middlesbrough loanee Grant Hall and highly-rated youngster Cameron Humphreys were two of the three centre-halves alongside club stalwart and skipper Richard Wood, who was heralded by three corners of the ground, prior to kick-off as he lined up for his 600th career appearance.

Fellow signings Cohen Bramall, Jamie McCart, Scott High and Peter Kioso had to wait for their opportunities as they made up the seven-strong home bench with fans favourite Georgie Kelly.

In front of a red-hot atmosphere, Rotherham were intent on making their mark, early on, and Washington endeared himself to the home faithful with a committed challenge on Kyle Naughton.

The Swans had the first sight of goal when Matty Sorinola’s shot was deflected behind by Wes Harding before Hall had to make a hurried clearance to prevent Michael Obafemi from breaking clear.

Swedish stopper Viktor Johansson had his first involvement to smother Joel Piroe’s curling effort from just outside the box.

The Welsh side, perhaps unsurprisingly, were having the lion’s share of possession but Rotherham were maintaining their shape while threatening on the rarest of occasions.

It was from a Rotherham move that Swansea launched a quick counter attack when skipper Matt Grimes curled a lovely ball to the flank and Piroe got a yard of his marker, before blasting over, although his effort had taken a slight deflection off a home defender.

Despite the visitors making the early running, Rotherham silenced the noisy Swansea faithful by opening the scoring, just past the quarter hour.

The home side fought hard to win a throw in an inviting position and Harding duly obliged by launching a long bullet into the box and Wood, in an aerial challenge, forced a Swansea defender to glance the ball towards his own goal, and Ogbene, who was on his wrong side, skilfully nodded the ball over Andy Fisher, in an instinctive move, and the ball found the heart of the visitors goal.

The Millers were galvanised by the breakthrough and Washington, showed his experience, by drifting from the flank to let fly with a deflected effort which went into the grateful hands of Fisher, before Wood was denied at the far post as he met Shane Ferguson’s corner, as the visitors scrambled the ball clear.

Warne’s side were having a golden spell and they almost made it two but ‘keeper Fisher came to the Swans rescue.

Harding delivered an innocuous looking centre from the right flank but the ball found Ogbene – with his back to goal – and the Republic of Ireland star executed an audacious acrobatic effort, which was heading towards goal before Fisher’s timely intervention.

The Swans had lost their way, to an extent, but they were almost the fortunate beneficiaries of Sorinola’s wayward cross, which arrowed towards the Rotherham goal and Johansson was backtracking nervously, and with the aid of the crossbar, the home ‘keeper parried the ball over his own bar.

The game had a whirlwind sixty seconds when Wiles’ broke down a Swans attack on the edge of the box before embarking on a lung-bursting run, which ended when the Rawmarsh-born midfielder lost his footing with four home men in support.

However, Swansea turned defence into attack in an instant and despite Rotherham finally regaining their defensive foothold they were undone spectacularly when Darling – a summer recruit from MK Dons – struck a sweet effort from long range which beat the despairing dive of Johansson to find the far corner of the net.

The visitors finished the half the stronger and Jamie Paterson stung the palms of Johansson with another effort from distance before an unmarked Nathan Wood wastefully headed over from Paterson’s free-kick.

The Millers, now attacking the KCM Waste Management Stand, had the first noteworthy action of the second half when Jamie Lindsay’s knock on paved the way for Wiles to give Ogbene another glimpse of goal, and the confident home player, looked to pick his spot in the far corner with a measured strike but Fisher was his equal with a fine, full-length save.

Minutes later, Ogbene led a Rotherham cavalry charge from deep, but the move came to nothing before Sorinola became the first to see yellow for a cynical pull-back on Lindsay.

Just before the hour mark, Joel Latibeaudiere headed harmlessly wide of the target following good work by Grimes in the build-up.

The Swans missed a gilt-edged chance to take the lead, minutes later, in an early contender for miss of the season.

The highly-coveted Piroe made a decisive run deep into Rotherham territory and with Wood worried about making a challenge in the box, the Dutch striker fired a cross-cum-shot which fizzed across the goalmouth, and with Johansson out of the game, Obafemi looked certain to tap home, but bizarrely his tapped effort went straight back into the hands of the home ‘keeper.

Russell Martin’s side were cranking up the pressure and Rotherham had another let off when Obafemi’s assist presented Paterson with the chance to strike a fierce left-footed effort which brough the best out of Johansson, who made a superb tipped save to preserve parity.

Rotherham had an injection of energy when Warne made a triple substitution with Kelly asked to lead the Rotherham line while Kioso and Bramall had their first taste of AESSEAL New York Stadium action in a Millers shirt.

The move almost paid immediate dividends when Kelly made something out of nothing to force Fisher into a reactive save.

The game was on a knife-edge and both teams had chances to take the lead when Piroe fired an effort just wide of the far post after Jay Fulton’s lay-off before Ogbene led a Rotherham opportunity, and Dan Barlaser’s timely flick-on gave Bramall, the chance to make himself an instant hero, but he fired straight into the grateful hands of Fisher.

Minutes later, Piroe found himself in the book for a clumsy challenge on Wiles before Martin, the Swansea boss, was also in hot water for disputing a free-kick award, near the visitors dugout.

Rotherham could have edged a tight encounter with three minutes to go when Bramall made a timely raid down the left-flank, and with Ogbene’s help, Barlaser had the chance to let fly from distance but Fisher tipped his powerful effort over the bar.

The Millers were good value for at least a share of the spoils, and Kioso was well-stationed to prevent former Millers loanee Ryan Manning from coming back to haunt his ex-club by taking the ball off his toes as he looked to shoot following Piroe’s excellent cross.

In six minutes of stoppage time, Bramall blotted his copybook, following an impressive cameo appearance, with a mistimed lunge on Latibeaudiere to deservedly receive a yellow-card.

In the game’s last act, Johansson got down smartly to smother Grimes’ hopeful effort from distance before the referee brought the curtain down on a clash which saw Rotherham’s home masses warmly applaud the efforts of their players, at the final whistle. 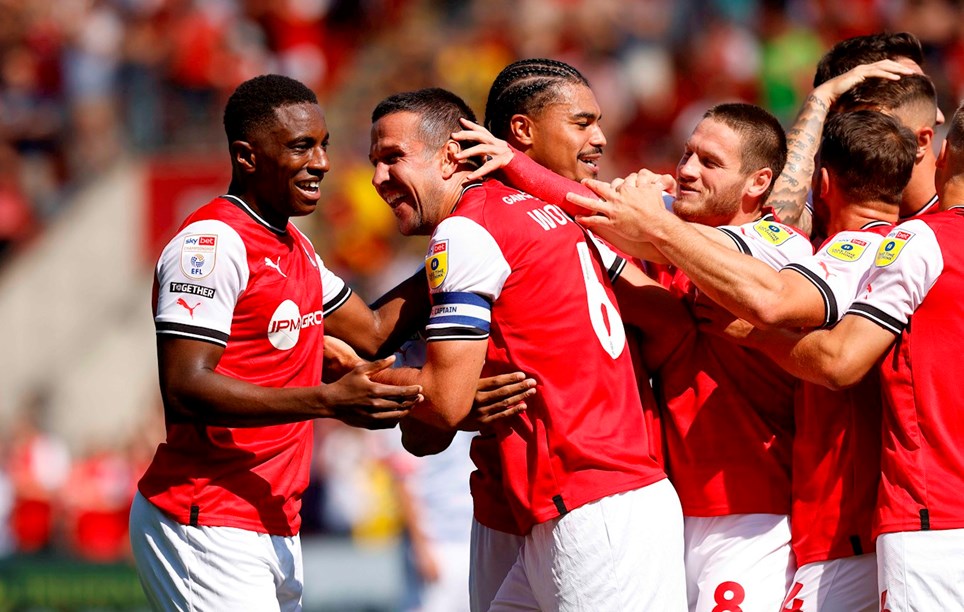 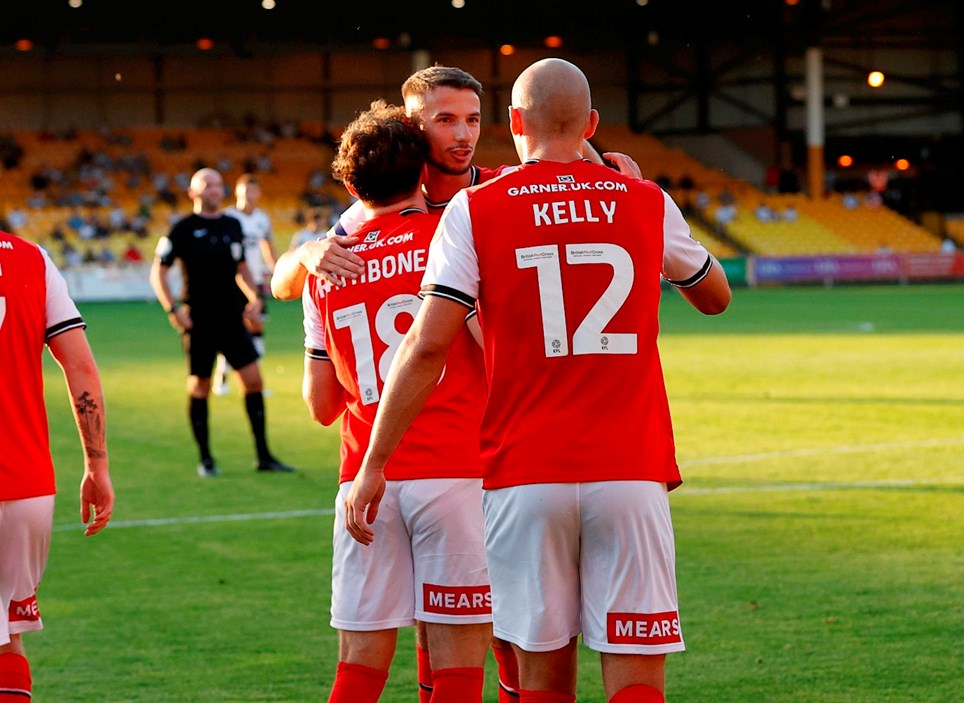 
Rotherham United progressed to the Second Round of the Carabao Cup with a 2-1 victory at Vale Park against Sky Bet League One side Port Vale, on a sun soaked evening in Burslem. 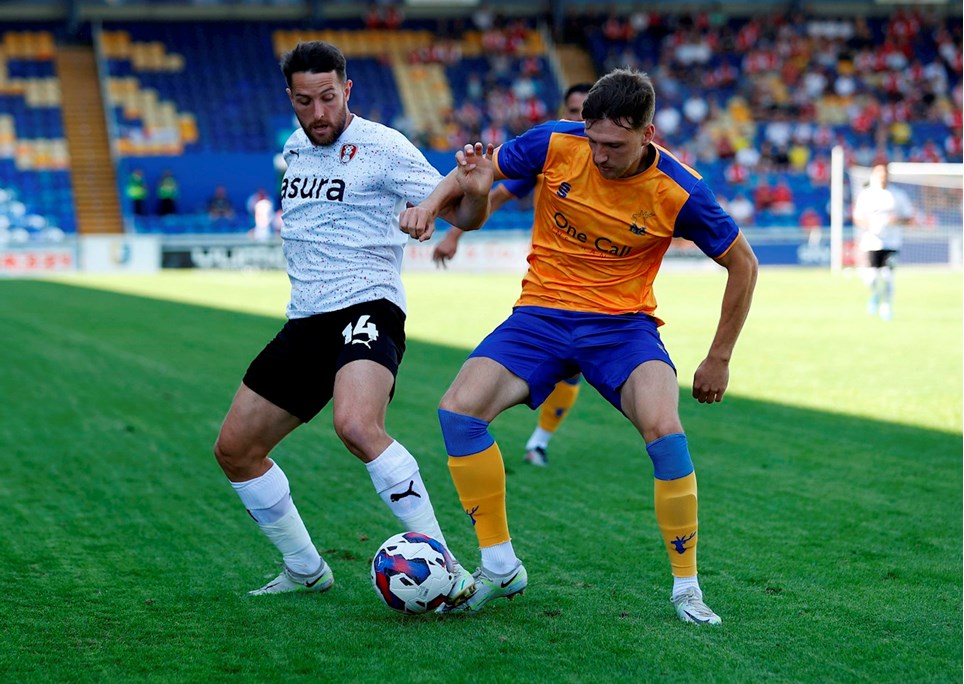 
Millers have to settle for friendly draw...... 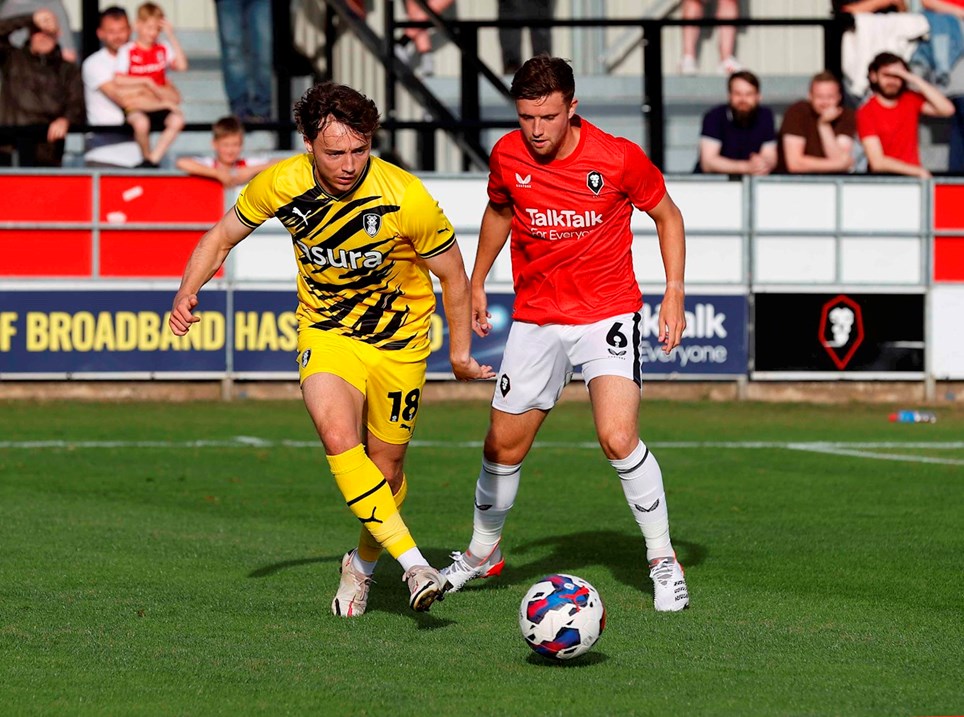 
Rotherham United continued their pre-season preparations ahead of the 2022/23 campaign with a second friendly in as many days as they locked horns with Salford City at the Peninsula Stadium, where the...