Everyone at Rotherham United has been deeply saddened to learn of the sudden passing of our lifelong supporter, club sponsor and friend, Eric Twigg.

The name ‘Twigg’ has become synonymous with the Millers, with Eric a driving force behind the long-standing and incredibly successful relationship between Rotherham United and his company Eric Twigg Foods.

The West Stand at AESSEAL New York Stadium has proudly carried his name for what is soon-to-be 10 years from when the stadium was first built, meaning that even those supporters who were never fortunate enough to get to know Eric on a personal level, will be aware of his strong links to this football club. 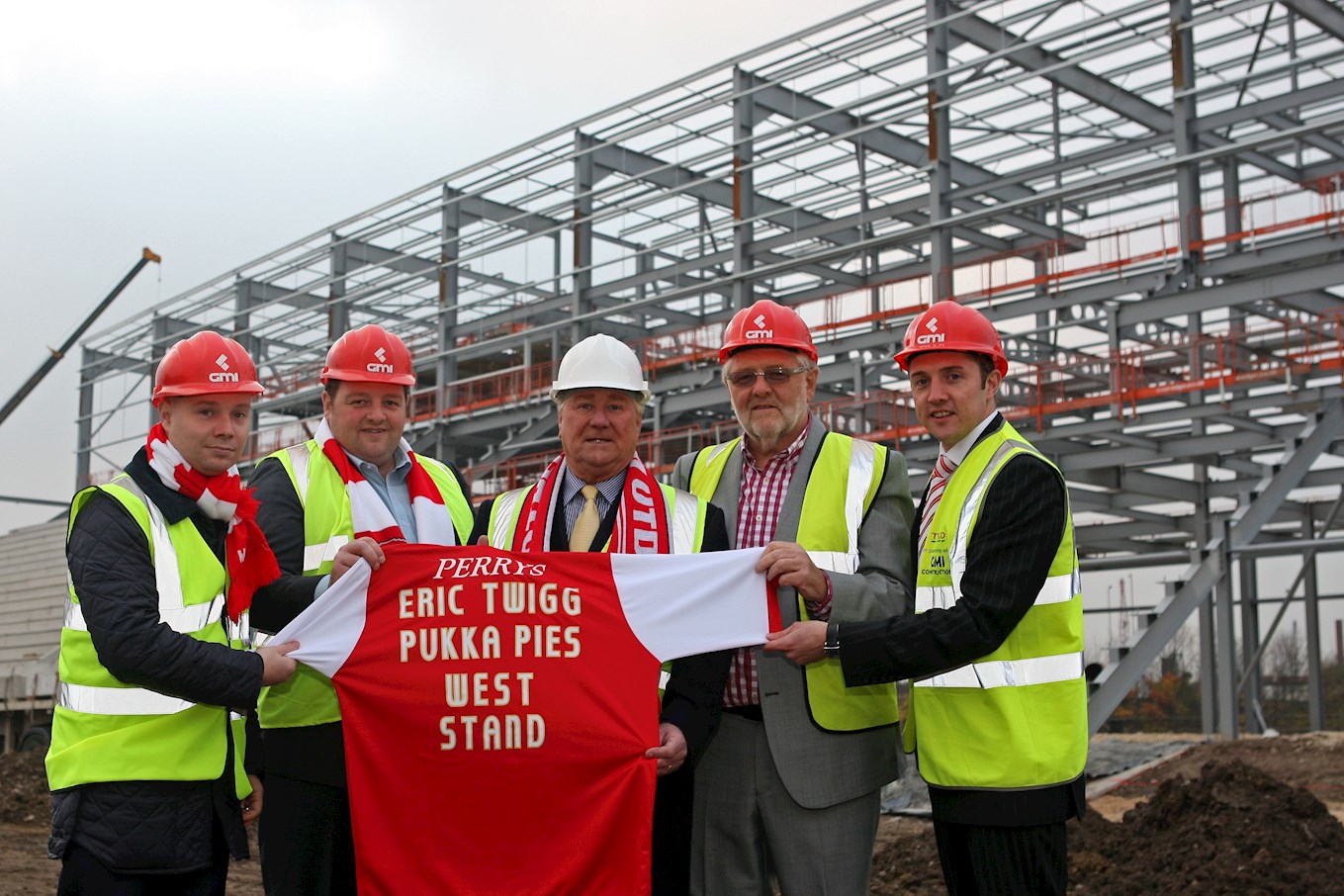 Name in New York lights: Eric and son Matthew sign a deal to ensure the main stand at the newly-constructed AESSEAL New York Stadium will carry the Twigg name

We know that this news will come as a shock to our supporters, many of whom have also been fortunate enough to get to know Eric throughout many happy years following the Millers.

Eric had a warm and infectious personality and would light up the hospitality lounges at AESSEAL New York Stadium with his presence. His affiliation with the club rivals that of our Honorary Life President John Breckin, with whom he enjoyed a great relationship as the pair became great friends over many years.

Alongside his many years of supporting the club, Eric’s legacy will also include introducing the Millers to the legendary Pukka Pies, which our supporters have enjoyed on matchdays throughout generations of watching their team.

Like many of our supporters, Eric’s affiliation with Rotherham United was lifelong, but having successfully grown his business in the local area and beyond, he decided to go one step further in supporting the club by pledging his sponsorship from the 1980/1981 season. 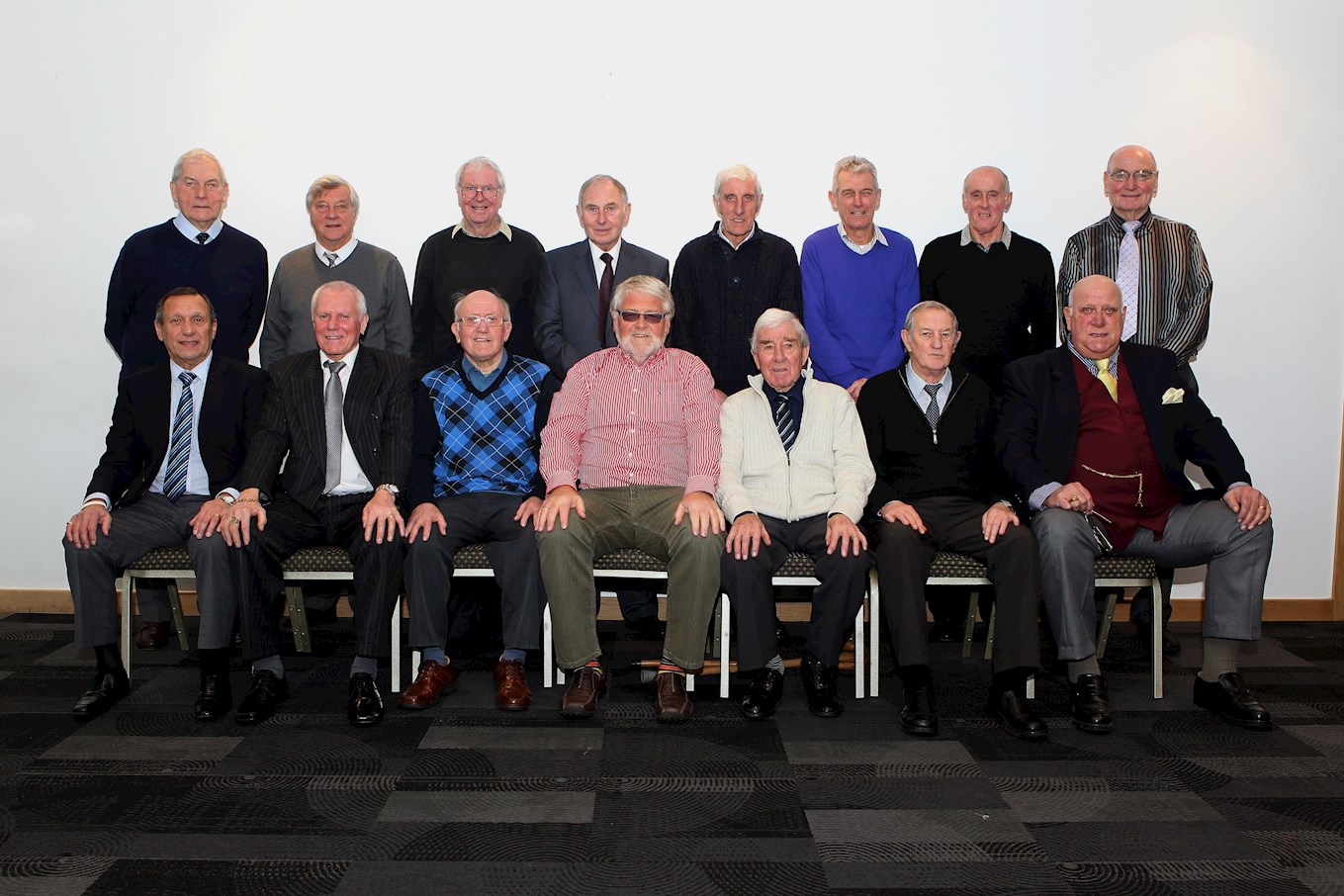 Popular throughout the ages: Eric's warm and infectious personality saw him befriend many players past and present

Eric’s early years as a club partner coincided with halcyon days for Rotherham United, in which the likes of Breckin, Ronnie Moore, Tony Towner and Rodney Fern helped the Millmoor-club to the title in 1980/81.

He was a loyal man and followed the Millers from Millmoor to Don Valley, as the club took the less than ideal but necessary steps to ensure a return ‘home’ to Rotherham in 2012.

As soon as the idea of stand sponsorship had been floated, Eric had pledged his support, signing one of many hugely significant commercial deals with the club to ensure that the main stand at AESSEAL New York Stadium carried his name. A massive statement, from a massive Millers fan.

Staff and supporters alike will be able to recall many a happy memory involving Eric and his family, who he would pass down his love for the Millers to.

Upon hearing the sad news of Eric's passing John Breckin commented of how he fondly recalls Eric insisting on treating the then-Millers squad to fish and chips on him, after their success over Arsenal in the cup, among many other happy memories.

Our current manager Paul Warne also has a close affinity with Eric, and indeed all of the Twigg family, who have not only been long-term admirers of his abilities both on and off the field, but also key sponsors of his testimonial which took place in 2013 at AESSEAL New York Stadium. 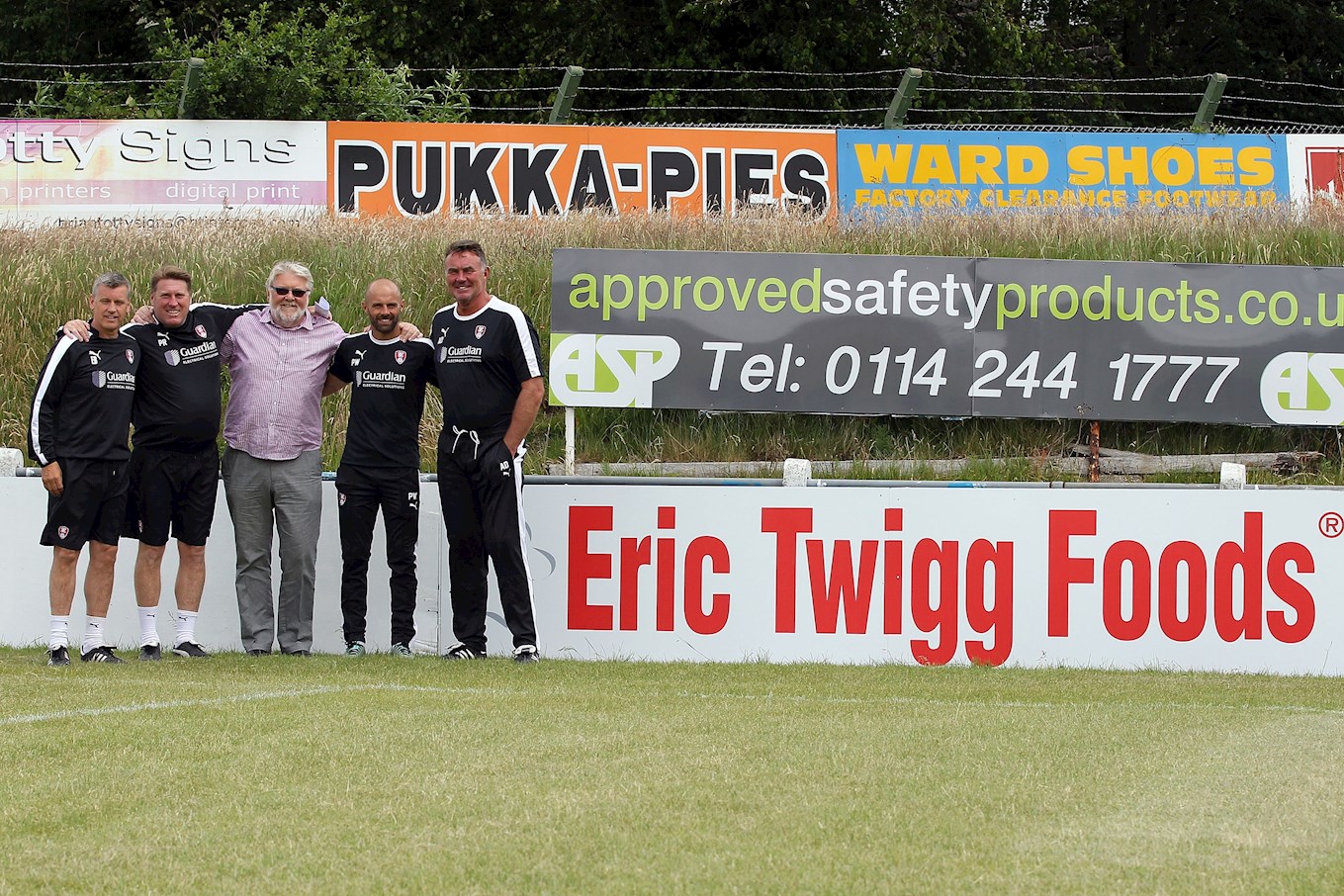 Close friends: Eric is pictured with close friend Paul Warne and the coaching staff of the time ahead of a pre-season friendly at Stocksbridge Park Steels

Eric was a fine example of an individual that we feel was representative of our fanbase, and beyond that, what Rotherham United stands for.

A family man, committed to being the best version of himself, and most importantly a good human being.

We know that his legacy will be continued by his son Matthew and we hope that the name Twigg will continue to be synonymous with Rotherham United for many years to come. 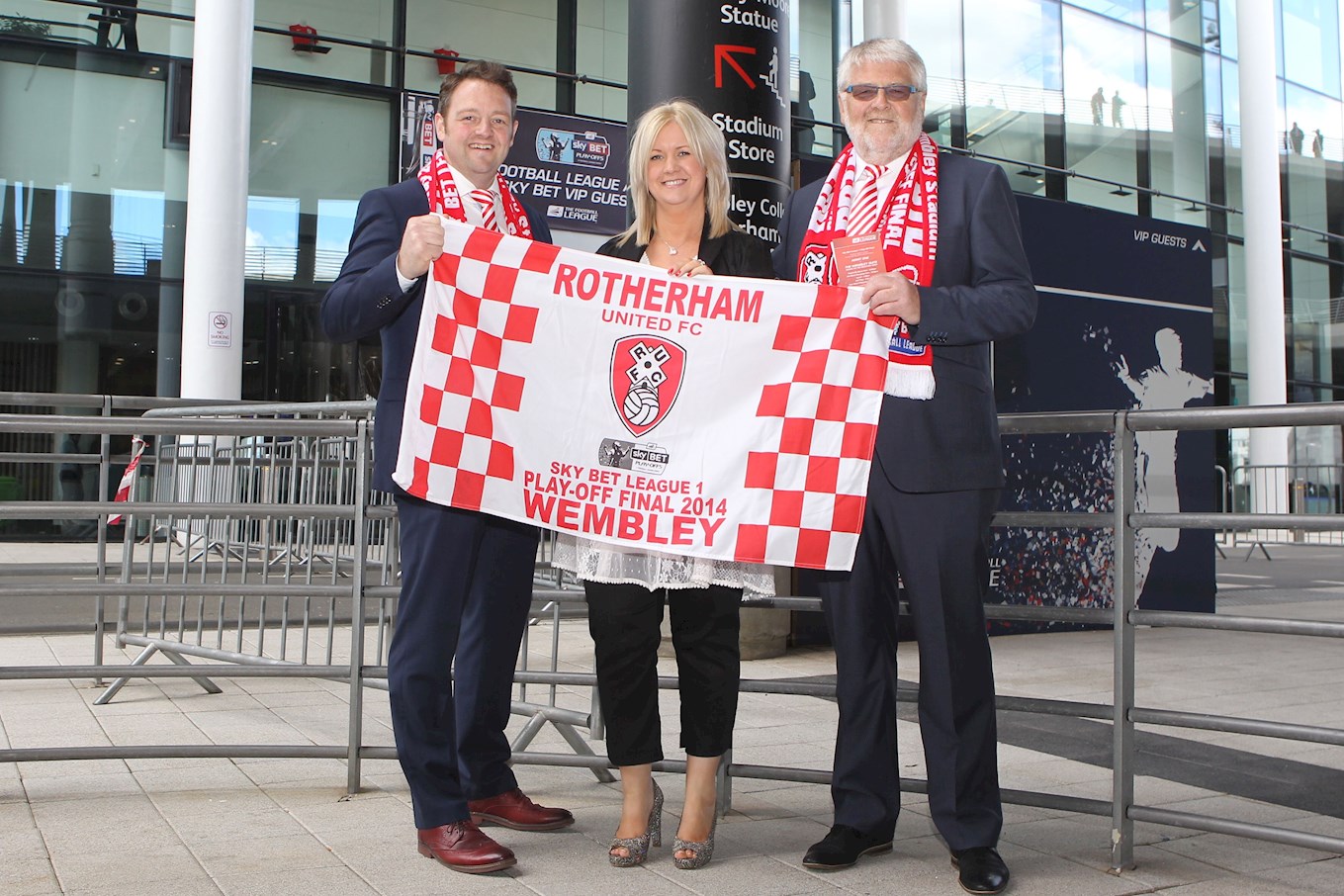 Following the Millers everywhere: Eric is pictured with Matthew and his wife Lisa ahead of the Wembley visit in 2014

We would like to take this opportunity to extend our heartfelt condolences to all of Eric’s family and friends, namely Matt and his Sister Joanne, at this incredibly difficult time.

“Eric was considered anything but just a sponsor here at Rotherham United and was, in fact, somebody that I was fortunate enough to get to know as a personal friend over the years. I spent many an hour in his company."

“His name among our supporters and within the town is incredibly well-known and I am sure that everyone will be as shocked and saddened to hear of his passing as we were here at the football club.

“Having long since introduced the next generation of Twigg’s to Rotherham United, I would like to offer my heartfelt condolences to Matt, his sister Joanne, and indeed all of Eric’s family and friends.” 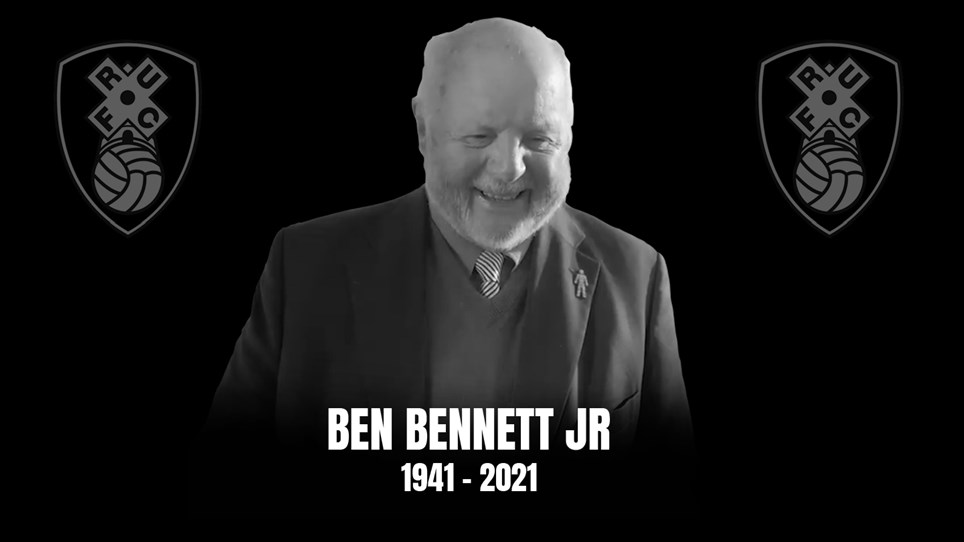 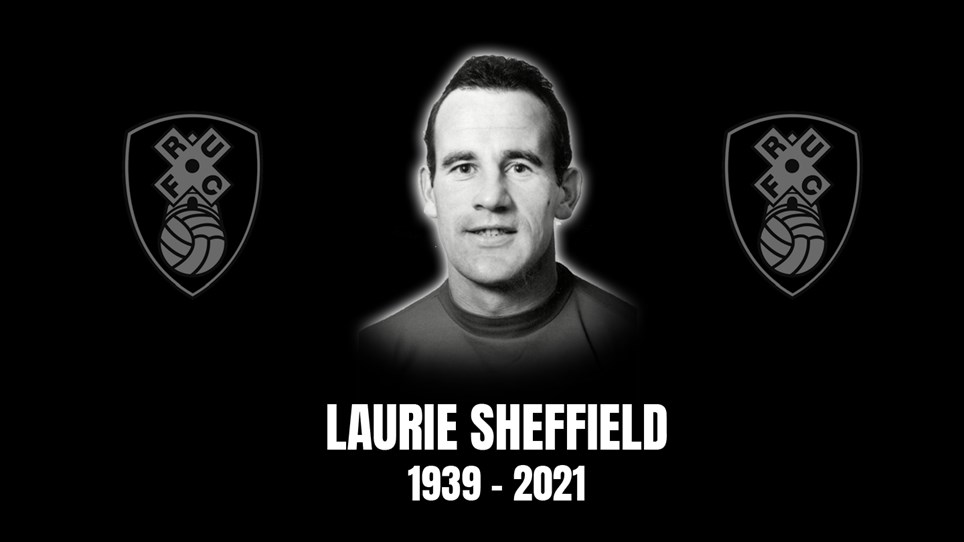 
Everyone at Rotherham United has been deeply saddened to learn of the passing of our former player Laurie Sheffield, aged 82. 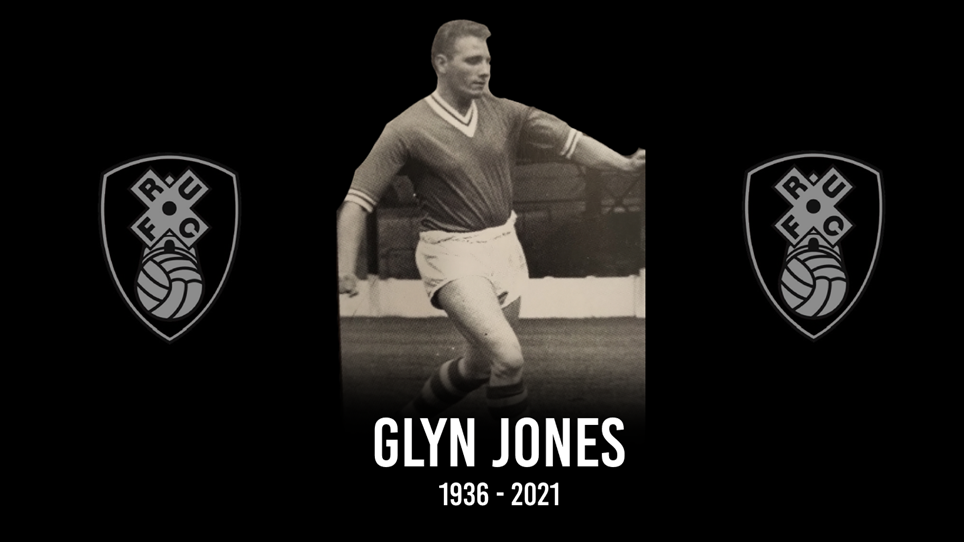 
Rotherham United have been deeply saddened to learn of the passing of our former player, Glyn Jones, aged 85.