Rotherham United moved back into the Sky Bet League One automatic promotion spots following a solitary goal victory over Ipswich Town in front of the Sky TV cameras.

On a sun-drenched AESSEAL New York Stadium afternoon, Michael Smith was the Millers hero with the all-important winner with 12 minutes to go, after Ipswich had proven a tough nut to crack.

The Millers’ victory put them back in second position on goal difference although fellow contenders Wigan Athletic and Milton Keynes Dons, who they leapfrogged, were in action, later that day.

Following their disappointing reversal at the hands of Portsmouth in midweek, Millers boss Paul Warne made four changes for the visit of the Tractor Boys.

The home side had a new look to the back three with Wes Harding and Rarmani Edmonds-Green drafted in at the expense of Richard Wood and Joe Mattock, who had to settle for substitute berths.

Ollie Rathbone returned to the Millers engine room while it was a three pronged pace assault with Mickel Miller and Jordi Osei-Tutu, who took a knock at Fratton Park, lining up on the flanks while Republic of Ireland flyer Chiedozie Ogbene was asked to play just behind top scorer Smith.

Buoyed by a vociferous home backing, Rotherham were quick out of the blocks and they had the first sight of goal in the early minutes.

After forcing an early corner, Miller curled over a deep centre which Smith headed back into the business area and Osei-Tutu had a low drive blocked en-route to goal, before Ipswich scrambled the ball clear.

In the next home attack, Harding floated a delicate free-kick into the box and skipper for the afternoon, Michael Ihiekwe looped a long-range header wide.

Despite the Millers’ early promptings, Ipswich missed a gilt-edged chance to open the scoring on eight minutes.

A defensive splitting pass had Rotherham backtracking, and Wes Burns skipped away from the attentions of Miller before playing a perfectly-weighted cross along the face of the Millers goal, but James Norwood fluffed his lines with an awkward finish from close range, and the chance was lost.

The Millers had a sniff of their own when Edmonds-Green’s pinpoint pass split open the Ipswich defence and Ogbene had the run on his marker, before looking to find the unmarked Smith, at the far post, but his tame cross was intercepted by Luke Woolfenden.

Moments later, Ipswich failed to deal with a long punt forward and the deftest of flicks from Ogbene paved the way for Osei-Tutu to advance with menace, but his cross ballooned into the North Stand.

Warne was forced into an early personnel and tactical reshuffle when Miller was left grounded – with what appeared to be a muscle strain – and Dan Barlaser was introduced into the fray. Ogbene was moved to the wing, and Ben Wiles switched into the number ten position.

The game had lost a bit of its early flow and momentum until Ipswich were unable to clear a long free-kick into the box, and Lindsay’s cushioned pass presented Wiles with the chance to strike, and he duly obliged with a low shot which was diverted away from goal by Tyreeq Bakinson.

The Rawmarsh-born midfielder was in the thick of the action and a lovely bit of skill left Burns and Sone Aluko in his wake before racing into the box, where he appeared to be bundled over by Janoi Donacien near the touchline, but no further action was taken by the referee.

Both sides traded chances when Dominic Thompson skipped down the left flank to drill a low centre which Viktor Johansson was unable to reach but it evaded Ipswich runners before Smith, surprisingly, elected to pass, in a Millers foray, but Rathbone’s snap shot was bravely blocked by a retreating Ipswich defender.

Burns became the first to see yellow for a cynical clip of Osei-Tutu’s heels and the duo clashed again when the Arsenal ghosted past him like he wasn’t there in a move which ended when Wiles volleyed wide from Rathbone’s clipped centre, following a rare period of Rotherham pressure.

There was a flashpoint, in stoppage time, when Bersant Celina petulantly clashed with Rathbone, to leave the Millers midfielder on the ground, but the referee decided to brandish a yellow card, and not the red card that the AESSEAL New York Stadium crowd were baying for.

Just seconds into the half, James Norwood was penalised for a hefty aerial challenge with Ihiekwe, which left the Rotherham centre-half needing lengthy treatment, while the visiting forward was booked.

Ihiekwe returned to the proceedings and Smith was inches away from making a telling connection with Edmonds-Green’s lovely cross, but the ball was taken off his toe.

The Millers had a good spell of pressure when Smith harmlessly headed over from Barlaser’s free-kick before Osei-Tutu’s cross was just too high for Ogbene, who could not turn the ball home, from just yards out.

In the aftermath of the move, Edmonds-Green flashed a shot which had Christian Walton nervously scurrying across goal, as it shaved the far post.

Woolfenden deservedly saw yellow for a late challenge on Rathbone and Rotherham almost punished him for his misdemeanour when Barlaser planted the resultant free-kick to the back stick, but Smith, off-balance, could only head into the side netting.

Just past the hour mark, Edmonds-Green was carded for hauling over Norwood before Aluko was somewhat fortunate to just receive the same punishment for a dangerous challenge on Johansson, which left both players needing attention.

To rub salt into Rotherham wounds, Aluko was immediately replaced by the Ipswich coaching staff.

The Millers were giving it their all, and Rathbone’s lovely pass narrowly evaded the attentions of Ogbene, who would have been clean through.

The Tractor Boys made something out of nothing when Woolfenden strode out of defence with purpose, to skip past challenge after challenge, to amazingly race clear and with Rotherham at sixes and sevens, he rolled a tantalising ball across goal which Ogbene only half-cleared to Burns, on the edge of the box, who fired a rasping drive which brought a fine save out of Johansson.

The game was now a little stretched, and Smith rose highest to meet Barlaser’s corner but Walton superbly blocked his point-blank header, at close quarters.

However, Rotherham and Smith were not to be denied, and the Geordie marksman grabbed the decisive winner with 12 minutes to go.

After much deliberation, Harding launched a long throw into the box and Ipswich failed to clear their lines with Rotherham pushing for a shooting opportunity, Osei-Tutu had a shot blocked, but the ball fell kindly for Smith, who kept his nerve, to arrow a low effort which beat the outstretched hand of Walton, to find the bottom corner of the net.

The Millers frontman, who scooped a trio of awards at the end of Season Dinner, embarked on a celebratory run to the stands, as he netted his 25th goal of the season in all competitions, but his first in the league, since the end of February.

The home side came close to a second when Wiles’ fired wide before Smith had two efforts, by curling an shot, narrowly over, before heading over near the end.

Warne’s side, who had worked hard for their slender advantage, were in no mood to give it away, and with Richard Wood brought on for some defensive reinforcement, they showed good game management, in an unbelievable nine minutes of injury-time, to end a run of three successive defeats, and breathe some much-needed life into their automatic promotion challenge. 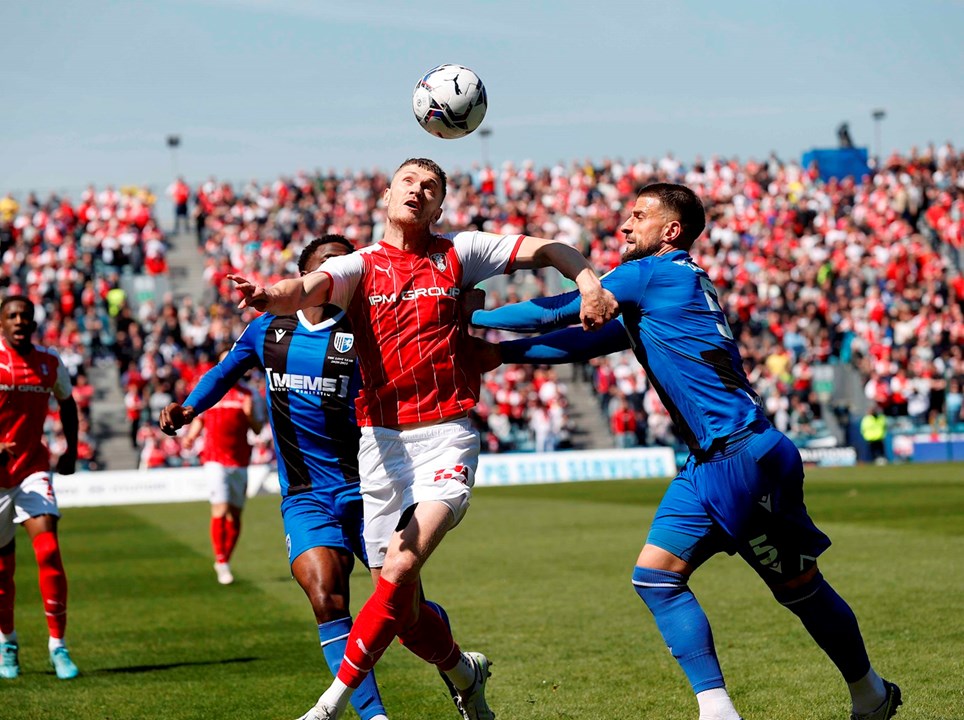 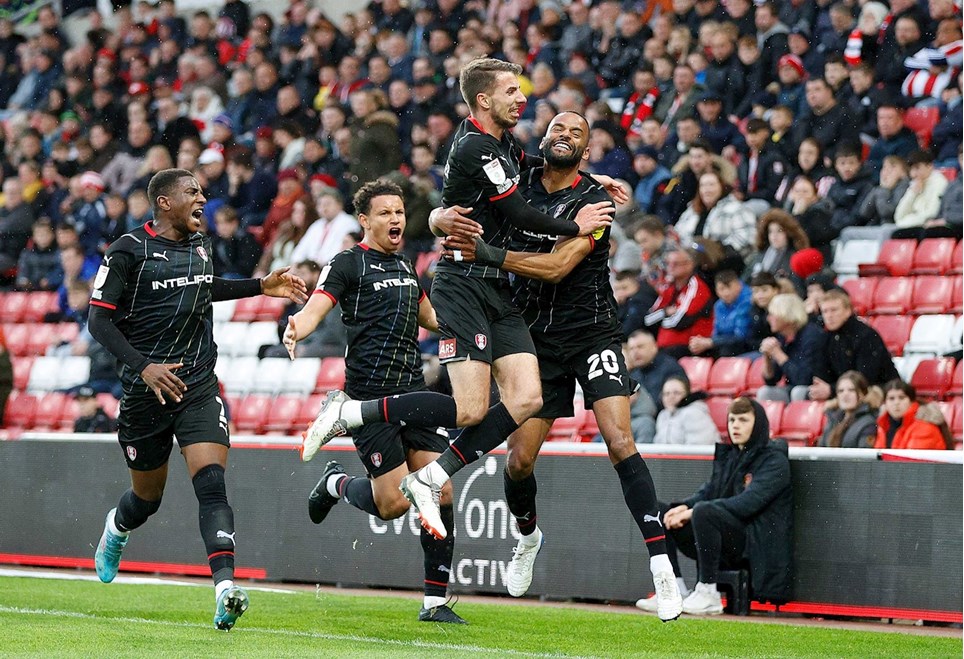 
Millers pegged back late on.... 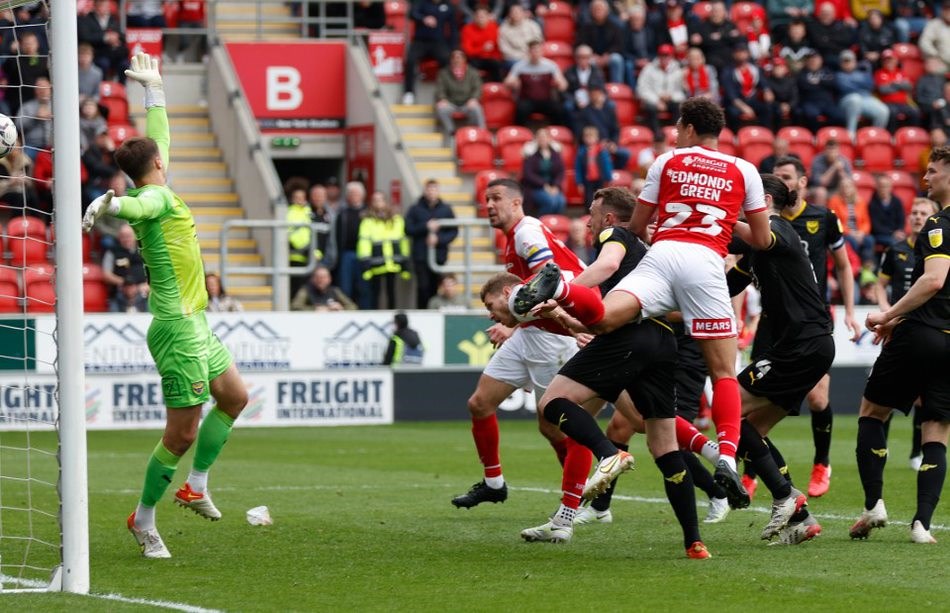