It was a high scoring affair at the AESSEAL New York Stadium, but it was Fleetwood Town, who came out on top, in the Roses clash.

In a topsy-turvy encounter, Fleetwood stunned the home faithful when Callum Morton broke the deadlock against the run of play, but Rotherham grew into the game and Michael Smith’s fourth goal in six games levelled matters before Kieran Sadlier kept his nerve from the spot, on the stroke on half-time, to give Paul Warne’s side an interval lead.

This proved a false dawn for the Millers, though, as Ged Garner regained parity before Danny Andrew’s stunning free-kick put Simon Grayson’s side ahead for a second time.

Callum Camps rubbed salt into the Rotherham wounds with a fourth goal, and even Will Grigg’s late introduction on his home debut, failed to spark the home side to life.

The Millers only made a solitary change to their starting line-up following their league victory over Doncaster Rovers, prior to the international break.

Irish flyer Chiedozie Ogbene shrugged a hamstring pull, sustained against the Owls, to take his place on the flank while Mickel Miller was suspended because of his recent red card.

Only Sadlier and Freddie Ladapo were retained from the handsome EFL Trophy victory at the Keepmoat Stadium, in midweek. One of scorers that night, Grigg had to wait for his league bow, by being named on the substitutes berth, following his deadline day move from Sunderland.

Following a slow opening by both teams, the Millers had the first sight of goal when Sadlier showed fleet of foot to narrowly a number of Fleetwood challenges, before being tripped in a central position, and the Irish playmaker dusted himself down to take the resultant free-kick, but his low effort was blocked by the visiting wall before he was denied on the follow-up.

Moments later, Ogbene’s threaded pass saw Jamie Lindsay burst in the box, but his pull-back towards Smith was intercepted by a visiting defender before Ogbene showed a turn of pace to leave Danny Andrew in his wake, but he could only blaze an effort harmlessly wide from a tight angle.

Chances were at a premium in the early exchanges, but Rotherham threatened the visitors’ goal when Sadlier’s dangerous corner paved the way for Michael Ihiekwe to outjump Callum Johnson, from just yards out, but his downward header bounced over the bar – with one-time Rotherham ‘keeper Alex Cairns appearing to give it a helping hand on the way.

Fleetwood were showing little as an attacking force, but they dealt a sucker punch, by opening the scoring on 24 minutes, very much against the run of play.

Jordan Rossiter started the move, by breaking the Rotherham midfield lines and Camps took on the initiative, by presenting Morton with a one-on-one situation with Wes Harding, and he worked a yard on the Jamaican international, before firing high into the Rotherham net, giving Viktor Johansson little opportunity to react.

Warne’s side responded positively to the blow, and Ladapo’s assist gave Ben Wiles the chance to strike goalwards, but Cairns stood up tall to parry the ball to safety before Smith blazed over following good work by Ollie Rathbone initially.

Smith’s influence was growing, and he rose highest to meet Sadlier’s free-kick, but his downward header grazed the upright with Cairns nervously scurrying across goal.

The moment proved a warning shot for the Cod Army, but it was not heeded as Rotherham’s talisman equalised seven minutes before the break.

Harding steadied himself before unleashing a long throw into the danger area, and Smith showed his aerial process, once again, by easing his nearest challenges out of the way, and cleverly guide his header, out of the reach of a desperate Cairns, and into the bottom corner of the net.

The Millers were a rejuvenated outfit, prior to the break, and Fleetwood had to withstand some Rotherham pressure, when Ladapo clipped an effort over the bar when Cairns spilled Sadlier’s centre before the in-form Morton was lucky to escape further sanction, by taking an unnecessary tumble, in the box, which irked Rotherham fans and players alike.

With half-time approaching, the game took another twist, when Rotherham were gifted an opportunity to take the lead from the penalty spot.

There looked little danger for the visitors, before Ogbene attempted to latch onto a loose ball, before being stopped in his tracks, by Camps, who pulled him back, in a rash moment, and the referee had no hesitation in pointing to the spot.

Sadlier stepped up from 12 yards, and the former Doncaster man banished his demons, following his spot-kick miss against the Owls, by calmly sending Cairns the wrong way, and stroking the ball home.

The Lancastrians were quick out of the blocks, at the start of the second half, and the impressive Morton raced away from home skipper Richard Wood to advance menacingly into the box, in a move which ended when sub Max Clark volleyed narrowly wide of the home goal.

Sadlier’s had a cross-cum-shot which shaved the angle of the goal, but Fleetwood got back on level terms, on 54 minutes, with a goal which had a touch of controversy about it.

Camps made up for his earlier error, by threading a ball into the channel, whereby Ged Garner found himself in acres of space, but with those of a Rotherham United persuasion expecting a flag which never arrived, the Fleetwood forward took advantage to bare down on goal, and slide the ball under the body of advancing Johansson.

The tension was raised a notch or two and Fleetwood turned the game on its head, by regaining the lead, just seven minutes later.

The Millers were punished to the full when Rathbone was penalised for bringing down Harrison Biggins, just outside the box, and with the small, but noisy band of Cod Army supporters chanting the name of Andrew, the Fleetwood left-back’s status as a free-kick specialist, was richly deserved, when he curled a delightful effort which flew past the Millers wall, and left Johansson a helpless bystander, as it found the far corner of the goal.

Warne’s side were shell shocked, and after a double substitution failed to turn the tide of the game, the Lancastrians were well on their way to three points, when they added a fourth goal.

Morton was once again in the thick of the action, and after getting on the wrong side of Harding, before leaving him in his slipstream, Johansson came to Rotherham’s rescue by denying Garner, but Camps was on-hand, to calmly side the rebound home.

The Millers fans gave Grigg, a warm welcome on his home debut, and they came close to halving the deficit when Ihiekwe’s point-blank header was scrambled clear before Cairns stuck out a timely foot to deny Wiles.

Despite some late promptings by the home side, Fleetwood showed good game management to see the game out, and leave Warne’s side with three victories and three defeats out of their opening six games. 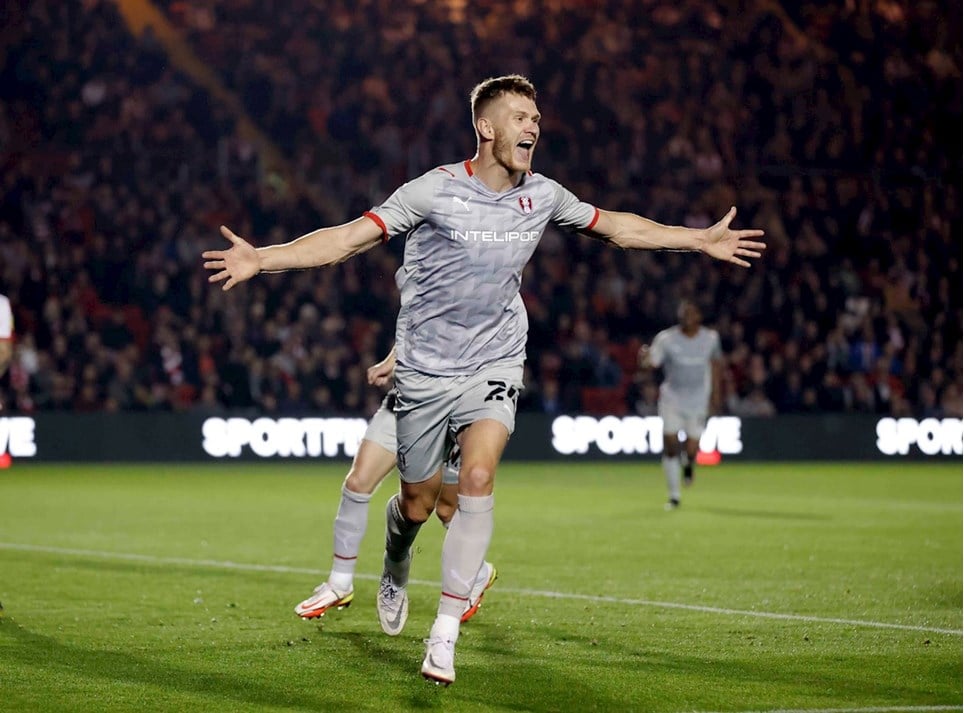 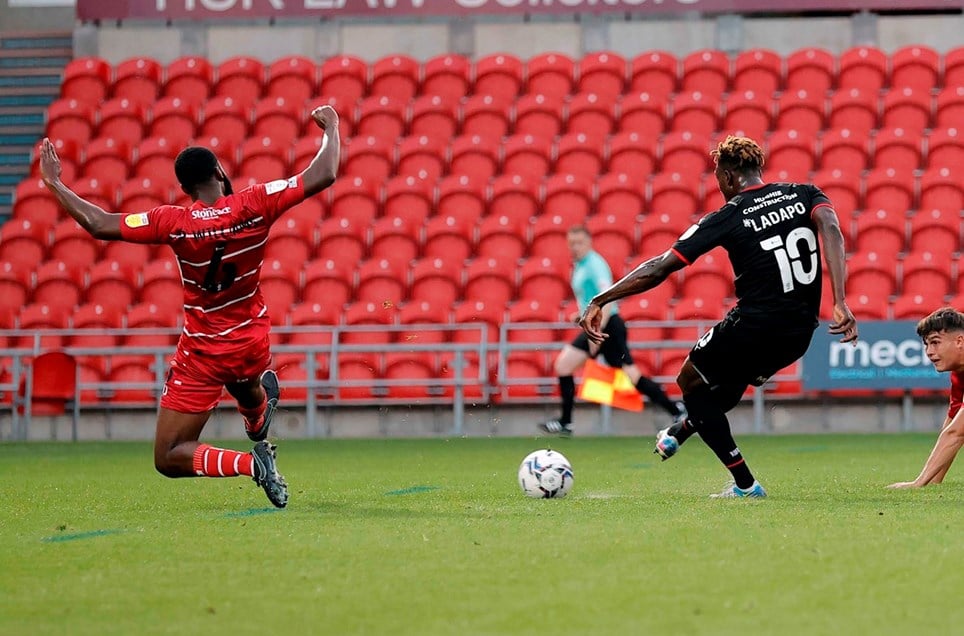 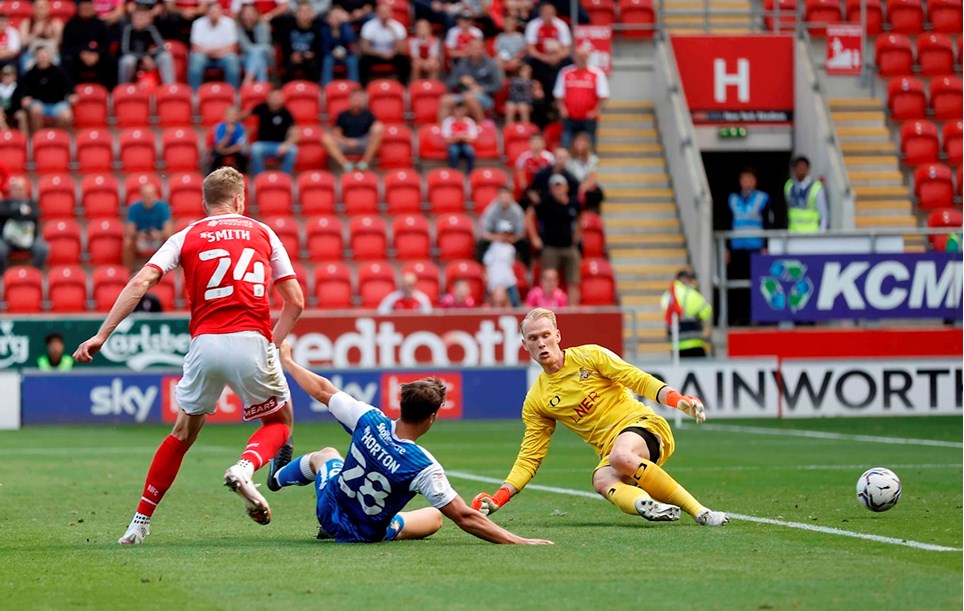