A second-half goal blitz paved the way for Rotherham United to maintain their fine run of form in Sky Bet League One, at the expense of highly-fancied Portsmouth, at a rocking AESSEAL New York Stadium.

The in-form Michael Smith came back to haunt his former club with his eighth and nine league goals of the campaign, either side of Marcus Harness’ leveller.

The Millers added two further goals in a seven minute second-half spell to kill the game as a contest, thanks to skipper Richard Wood’s header and Ben Wiles’ well-taken effort.

Boss Paul Warne made two changes to his starting line-up, from their last outing at Cheltenham. Wes Harding and Mickel Miller were drafted into the wing-back roles, at the expense of Kieran Sadlier and Shane Ferguson.

There were a couple of familiar faces in the Pompey squad with former loanees Sean Raggett and George Hirst named in the 18. Ex-Millers centre-half Clark Robertson missed out on an AESSEAL New York Stadium return, due to injury.

The South Coast outfit had the better of the early exchanges when firstly Shaun Williams tried his luck from distance with his trustee left-foot and despite the ball swerving in the air, Viktor Johansson was his equal with a fine save before Mahlon Romeo blasted a long-range effort into the home fans behind the goal, just minutes later.

The Millers were indebted to Harding, as last man, to deny Harness on two occasions, as he looked to find John Marquis with the goal at his mercy before the former Doncaster striker broke the home offside trap following a slide-rule ball, before his fizzed cross took Johansson out of the game but narrowly evaded the attentions of skipper Lee Brown, who would have headed into an empty net.

Despite being second best for the early stages, Rotherham came close to the breakthrough when Dan Barlaser caressed a free-kick into the danger area and Michael Ihiekwe headed the ball back across goal and Rarmani Edmonds-Green looked set to tap home, at the far post, but Republic of Ireland international Gavin Bazunu came out of nowhere to make a superb point-blank save, at his feet.

Both teams traded chances when firstly Harness fired a vicious shot from long range but Johansson got his body behind his shot before Wiles poked narrowly wide, at the other end, following Harding’s cross.

Harding was proving a handy outlet on the right flank, and Portsmouth failed to heed the warning, just shy of the half hour mark, when the home side switched play to great effect and the Jamaican international clipped a delicious cross and Smith, who had ghosted away from his marker, made no mistake to meet his centre and head home from close range.

The AESSEAL New York Stadium was now at fever pitch, and Brown curled a free-kick wide following a generous award before Smith, who was oozing confidence, volleyed over, at the other end.

In the last action of the half, Ihiekwe became the first to see yellow for preventing Bazunu from launching a quick throw.

The visitors were quick out of the blocks at the start of the second half and they levelled matters, just five minutes into it.

There looked little danger for the hosts until Portsmouth worked the ball from the left flank, and Harness, who had looked lively throughout, got the ball under his spell, before skilfully curling a right-footed effort which beat the outstretched hand of Johansson to find the far corner of the net.

The Millers called for reinforcements in the shape of Chiedozie Ogbene, who had enjoyed a fine week in Irish colours, including a first senior goal for his country, and the move paid immediate dividends, when Warne’s side regained the lead within six minutes.

The home side probed the Portsmouth area and Ollie Rathbone was the one to let fly from the edge of the box, and despite his effort lacking power, Bazunu made a hash of the save on his own line, and Smith could sense an opportunity to pounce and after being initially denied by some last-ditch and brave Pompey defending, Smith kept his nerve to calmly back-heel the ball to goal.

The Millers were now going for the jugular, and they effectively killed off Pompey hopes, by notching a third and fourth goal, in the space of a matter of minutes.

The home fans were in full voice, and they were off their feet, once again, when Barlaser swung over a tantalising free-kick into the box, and there was only one winner of the ball, in the frame of skipper Wood, who made the cross his own, by glancing the ball into the net from point-blank range giving Bazunu no chance.

Warne’s side were running riot at this stage, and they found themselves on the score sheet, again just two minutes later.

The Millers looked to be heading into a cul-de-sac but Miller dug out a pass into the feet of Wiles, who fired a low left-footed effort through the legs of a Pompey defender and Bazunu was motionless, as the ball arrowed into the corner of the net.

Danny Cowley’s side were visibly shell shocked and the Millers came close to rubbing salt into the wounds when Bazunu was at full stretch to deny Miller before Wiles fluffed his lines with a miscued effort, from just yards out.

Portsmouth’s frustration boiled over when Louis Thompson and Romeo were cautioned for fouls before Bazunu spared further Pompey misery, when he denied Barlaser from making it five, following a well-struck free-kick. 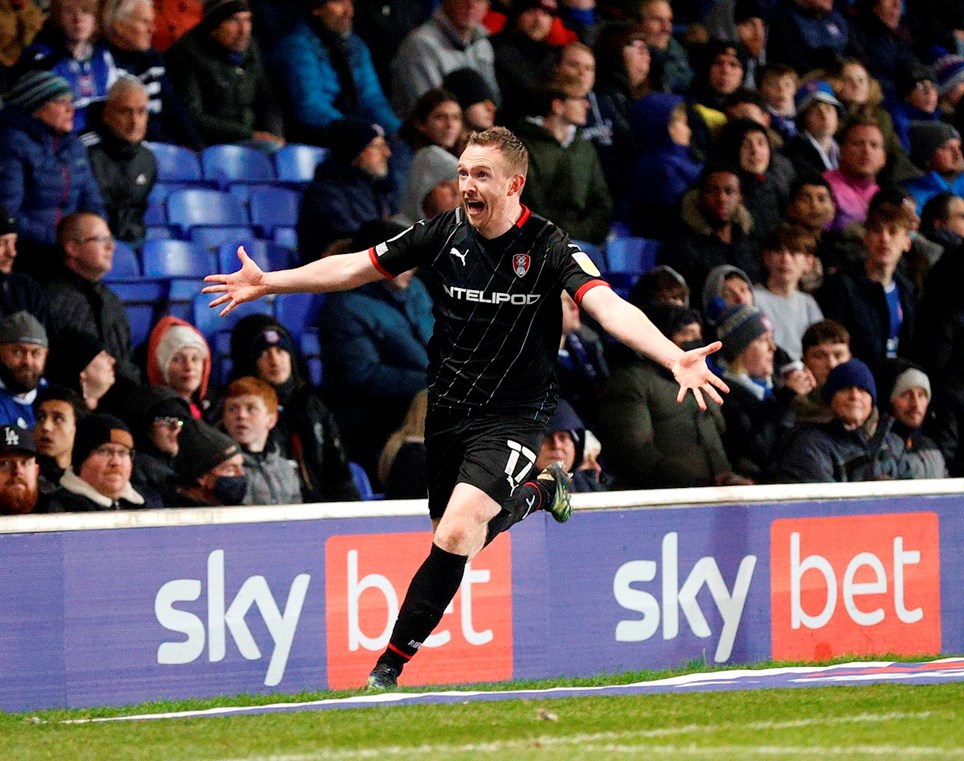 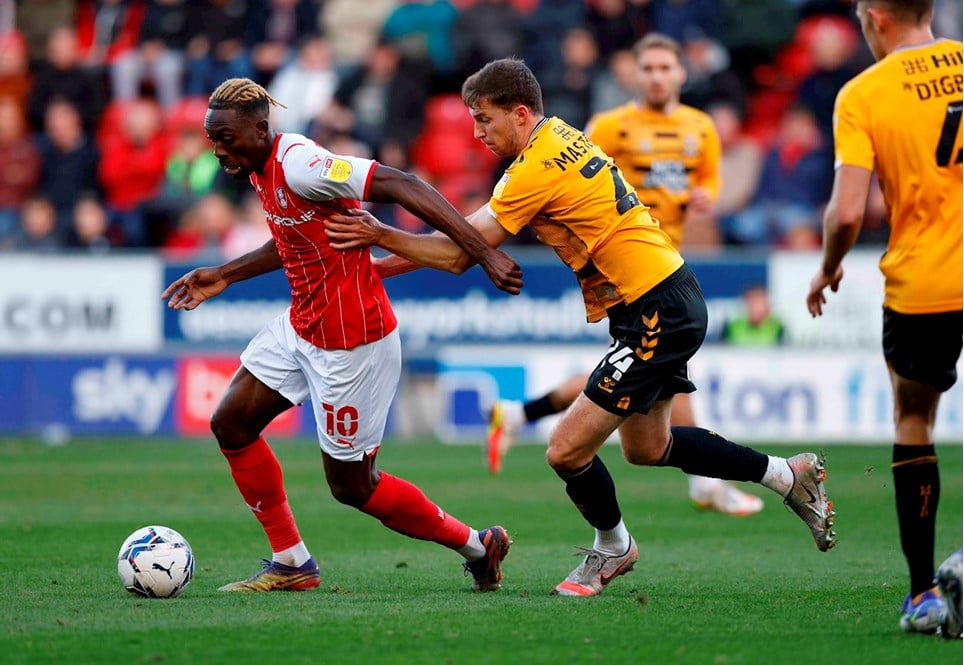 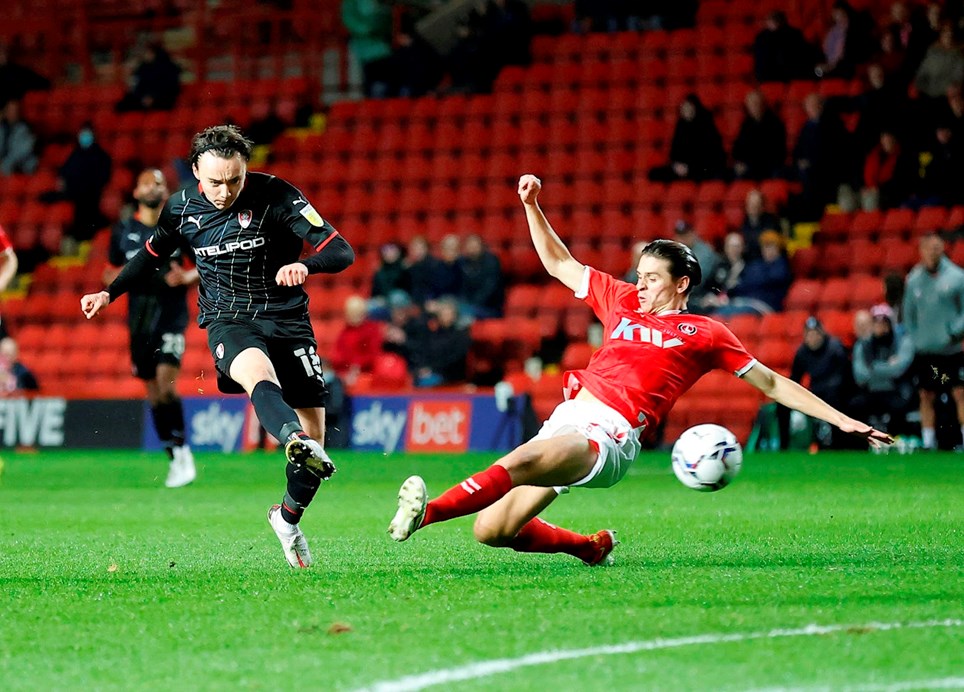