Young Millers book place in next round of FA Youth Cup

Rotherham United Under 18s booked their place in the second round of the FA Youth Cup after a clinical display against a spirited Boldmere St, Michaels side.

Having taken the lead through Ben Hatton in the first half, the young Millers grew into the game and made their display tell by adding goals through a Ciaran McGuckin penalty and wonderful Curtis Durose finish.

Billy Carroll got the first effort in of the game with a header from a long throw that was straight at the ‘keeper on six minutes. Louie Hart’s cross at the other end seconds later had to be dealt with by the Millers defence as the away side responded.

The game really opened up and Ciaran McGuckin’s chip landed just the wrong side of the post after racing onto a fine ball down the right on nine minutes. Durose made a bursting run into the area on 11 minutes and did well to find Ben Hatton but his effort was cleared from inside the six-yard box as the young Millers applied the early pressure.

The Millers’ pressure finally paid on 14 minutes but much to the dismay of the away side who had a player down injured in Caius Farmer. Zack Bond cantered down the left and looped over a teasing cross that was cushioned home by Ben Hatton.

Hatton then turned provider on 23 minutes as he slipped a lovely ball into the path of the onrushing McGuckin but the striker shot straight at Taylor.

Greenhouse’s long throw-ins were causing mayhem in the Boldmere box, and Billy Carroll was unlucky to see his header as he connected to one land just wide with ten minutes left in the first half.

McGuckin struck a fierce effort from 25 yards that had beaten the ‘keeper, but sadly it cannoned off the crossbar.

Both teams enjoyed good changes in the opening exchanges of the second period, with Greenhouse coming close at one end before denying Boldmere at the other as Farmer shot inside the box.

The visitors  enjoyed a decent spell and were unfortunate not to find a leveller as the Millers threw their bodies on the line to deny the equaliser just before the hour. Moments later, the home side had a great chance to double their lead as substitute Jack Champion was upended in the box after showing great feet. Ciaran McGuckin took responsibility and made no mistake from 12 yards to make it 2-0.

Boldmere ‘keeper Taylor made a great save with his legs on 70 minutes as he denied McGuckin a second goal from a tight angle. The Millers number nine struck low and hard but was expertly denied by the visiting captain.

Durose and Champion exchanged some neat passes in the penalty area before the former skewed wide as the Millers continued to show great energy in the dying embers of the game. Rotherham did get the deserved third goal in the last minute thanks to the tireless work of McGuckin. 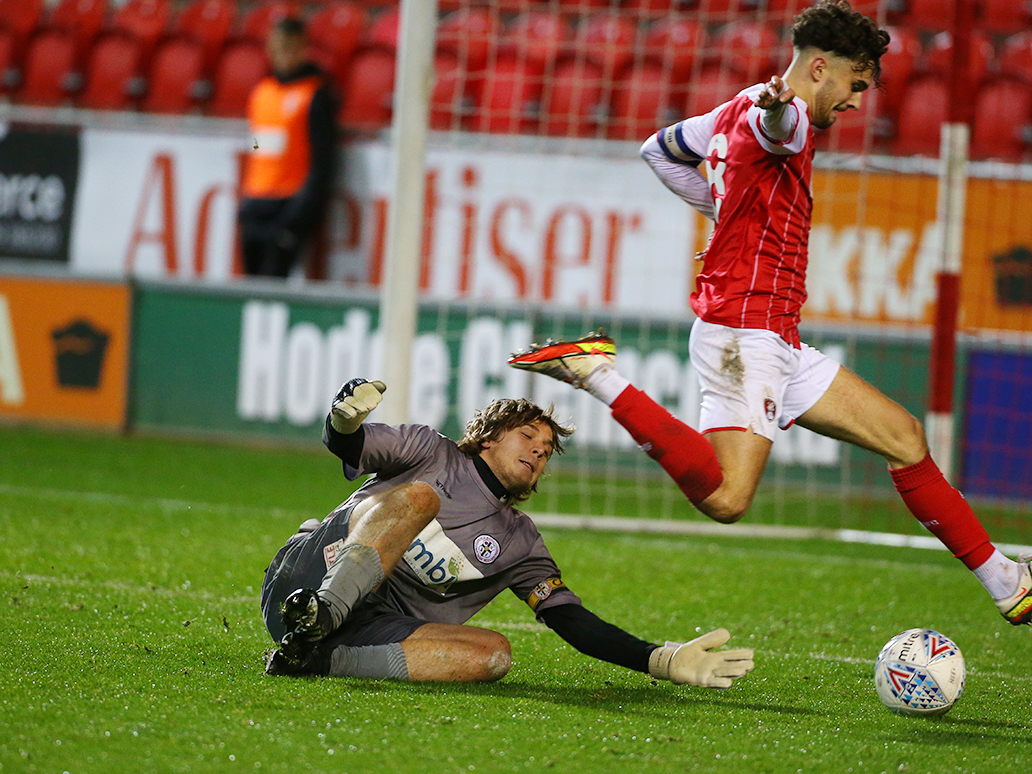 Curtis Durose rounds the 'keeper and makes it 3-0 to the Millers. Photo: Shaun Colborn

Captain Durose latched onto a perfect through-ball and after rounding the ‘keeper did ever so well to tuck home from a tight angle and book the Millers a place in the second round of the FA Youth Cup.