Through wind, rain and snow you can always count on Dave Fellowes and his team.

Since the AESSEAL New York Stadium opened its doors in 2012, the playing surface has garnered quite the reputation, often earning praise from opposing fans and managers alike over the years and winning a number of awards.

Covid-19 outbreaks, heavy snowfall and rain deluges have all wreaked havoc on Rotherham United’s fixture schedule and it is not just the first team who have had hurdles to leap over during the 2020/21 campaign.

In over 20 years in the trade Rotherham United Player Facilities Manager Dave Fellowes has battled everything the elements have had to throw at him, but even he admits that he’s never had a season like this.

With one of the worst winters in over a decade, a once-in-a-lifetime pandemic and a crammed fixture schedule, Fellowes and the team have been tested to their limits.

“I’ve never known a season like this to be honest, I’ve been in groundsmanship for over 20 years now and it has to be up there with one of the hardest I’ve had. Not just from the turnaround of games but on top of that, the winter this year has been one of the coldest and harshest I’ve known," Fellowes told www.themillers.co.uk.

“It has been an absolute nightmare. We’ve had games getting called off as well, which has led to uncertainty on when the games will be played, which of course makes it challenging for us. Myself and Mykel have worked right through the pandemic from when the season got stopped last March.

“In the summer, we didn’t know whether the campaign was going to be started again or when that would be. Thankfully we got some notice for when it was going to resume again, so that did help us somewhat.

“The pitch has took a bit of a battering this year, mainly due to the volume of fixtures, going from Saturday to Tuesday or Wednesday frequently.

“We’re used to getting two weeks between preparing for fixtures, so it has been really difficult and to be honest a big learning curve. Not just for us, but I think for every groundsman up and down the country. It has just been such a challenge.” 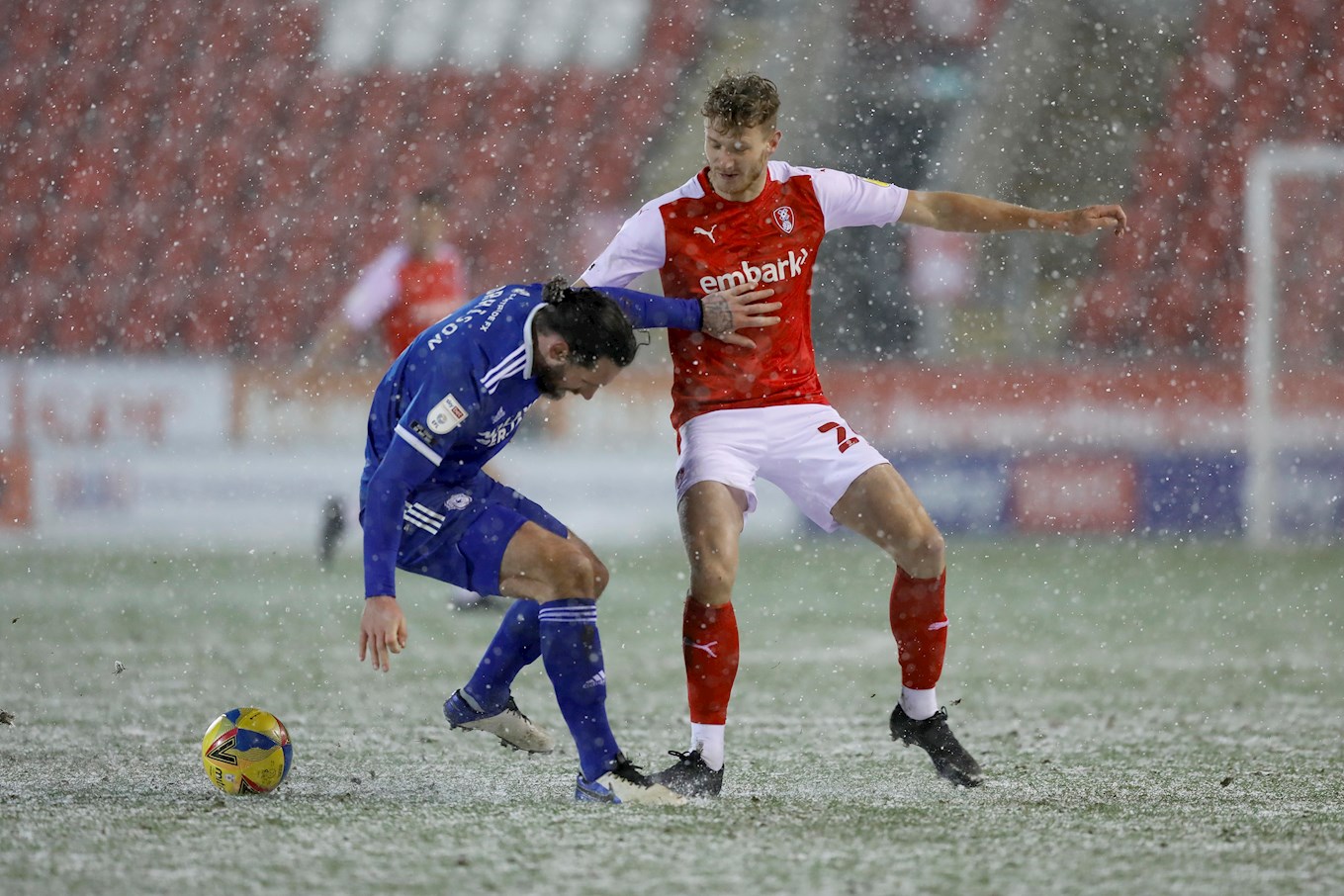 The surface at AESSEAL New York Stadium is not the only one across the land to have suffered from the bite of both the pandemic and the winter.

Closer to home, the pitch over at the first team training ground at Roundwood hit particular difficulty during the harsh winter months, with the surface deemed unplayable on some occasions because of the adverse conditions.

In ‘normal’ times, the first team staff would have been able to seek out a local pitch or exercise centre to help facilitate training, however due to the national lockdown, this has proved impossible, meaning everyone has had to adapt to the situation.

“I think this has been the worst winter we’ve had in over 10 years, we’ve struggled with frozen and waterlogged pitches up at Roundwood as well," Fellowes explained.

“There’s three of us, myself Mykel and Elliott and I must pay tribute to both of them who have been fantastic and I couldn’t have asked much more from them, the constant shifting of snow made everyday groundhog day."

“Over at Roundwood, the coaching staff were mucking in, as was the gaffer helping to shift the snow off the pitches and pulling frost sheets.

“When the stadium pitch had been playable at the same time the Roundwood one wasn’t, they were down here training.

“Usually they’d got a local astro surface or an indoor centre, but with everything shut it has really limited our options and we’ve lost quite a few training sessions because of that, I know they’ve held zoom sessions and other things like that to help keep ticking over, but we’d have liked to have provided them with a facility to use, but circumstances have made that impossible at times.

“Hopefully, we’ll never see a season like this again and the learning curve will stand us all in good stead.”

Even now, as we enter the early days of spring, we’re into the clam before the storm. A mammoth fixture schedule will see Paul Warne’s men play 12 games in just over a month, with a spell of four home fixtures in eight days in April.

The surface at AESSEAL New York Stadium will likely be pushed to the limits. However, one thing is guaranteed.

We'll be able to rely on Dave Fellowes and the team.