Come the end of a gruelling and energy-sapping 2020/21 campaign, most players were happy to get the opportunity to take some much needed time off and recharge the batteries.

Covid-19, a congested fixture schedule and many other factors made the last campaign one that we wont be forgetting in a hurry. For Chiedozie Ogbene however, he was in the position of not wanting the season to come to and end.

After missing the majority of the year through injury, the flying-winger was getting back into the swing of things prior to May and even tasted international football with the Republic of Ireland prior to Euro 2020.

Chieo turned up to the first day of pre-season training wearing his trademark smile, determined to hit the ground running and make up for lost time from the previous season. 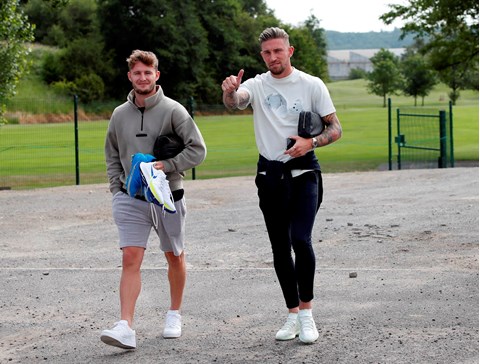 GALLERY | The lads are back for pre-season!

“I’m feeling good. It was tough, but we’ve come to expect that during pre-season here,” Ogbene told www.themillers.co.uk.

“There was a lot of running and various tests in the first few days and I think I came out of that quite well.

“Obviously, we’ve also had the footballs out as well and it was great to get a feel for the ball again. Now we’ll look to sharpen up ahead of the first game on Saturday (against Parkgate).

“After having so long out injured, I didn’t really want the last campaign to end, obviously, I feel like I’ve had a season in the Championship taken away from me and that has made me more determined to help the team get back there."

“We have to set our sights high, we know the league and we’ve been successful in it before and I don’t think there is any reason why we can’t be again. That is certainly going to be the aim.”

Saturday’s pre-season opener against Parkgate is expected to be played in front of around 800 supporters, the first time Millers fans will have seen their team in the flesh since March 2020.

Chieo – who has established himself as a popular figure amongst the fan base – admitted he’s looking forward to seeing a safe return of the Rotherham United faithful.

“We’re all looking forward to having the fans back. Any player will tell you that it is so much better when you’ve got fans in the stadium cheering you on."

“As has been touched upon a few times, I didn’t get to play as much as I’d have liked last season, but it was so strange not having the fans there and to think we went through a full season without them is crazy.

“There were fans in the ground when I played in Hungary with Ireland and it gave everybody an extra 10%, we’ve all missed that and fingers crossed they will be able to play a big part for us in the stadiums once again.”