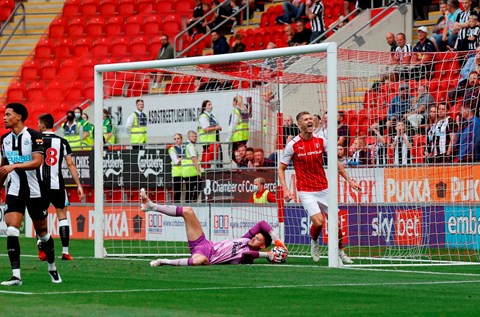 Fellow Geordie and boyhood Toon fan Michael Smith got the Millers off to a dream start when he thundered home Mickel Miller’s perfect cross in the ninth minute and the home side had ample opportunities to go into half time more than a goal to the good.

Steve Bruce’s side equalised six minutes from time through Jeff Hendrick’s looping header to rescue a draw for the top-flight visitors, but Barlaser believes that the performance will give the players a huge boost heading into Friday’s final friendly against Middlesbrough.

“I thought it was our best performance of pre-season and to come within minutes of beating a Premier League side at home will give the lads a lot of confidence,” Warne told www.themillers.co.uk.

“I think with the chances we had in the first half we really should have won the game, but it was great to test ourselves against a really good team."

“Pre-season is really about getting minutes into the legs before the real thing starts, but if you play well it is always a big boost.

Barlaser is a product of the Newcastle Academy, having spent 15 years at the club he supported as a boy.

With friends and family in the stands he admitted it was a proud moment to come up against his former side, while also paying tribute to the return of fans to AESSEAL New York Stadium.

“I had a few mates who were in the stands and my family came down for the game as well. I enjoyed getting the chance to showcase what I can do against a team that I obviously have a big affiliation with.

“Playing against top-flight teams is always enjoyable for me because you get a lot more time on the ball and it isn’t as frantic.

“I was pleased with how I played today and collectively as a team and on a personal level I’m happy with my performance.

“Hearing the noise from the crowd was honestly such a refreshing change. I know it has been said a lot, but it isn’t a soundbite, it really is great to play infront of them again."

“We’re going to need their support throughout the whole season, when they are behind us it gives us a big lift as we’ve seen before.

“That felt like a proper game today, I know it’s a cliché, but football is nothing without the fans, I hope they can continue to back us.”