This is the last time we were treated to the famous roar at the AESSEAL New York Stadium, when the Millers welcomed the MK Dons to South Yorkshire back in February 2020.

Unbeknown to the crowd at the time, this was the last time they’d see their team in the flesh for just under 17 months.

Rotherham United defender Michael Ihiekwe played in the last game infront of supporters and admits that seeing them back is something he’s very much looking forward to.

“It’ll be nice to get back to the New York, we haven’t played there this season and it feels like a lifetime ago since we had the fans back with us,” Ihiekwe told www.themillers.co.uk.

“Having them back will be a big boost. It’s a weird one because once the game starts you’re fully focused, but it is nice to have that familiar feel of having fans back in the stadium."

“Even coming away, at Grimsby and the other night against Harrogate, seeing fans gives you an extra buzz and a fire in your belly.

“Nothing is different in the changing room before because everyone is fully focused on the game ahead and getting each other up for that, but at the games there is definitely a better feeling atmosphere-wise.

“Even little things, during the second half against Grimsby and their fans were saying a few things to me, even that is brilliant as a player and keeps you switched on. It’s what football is all about.”

The Millers step up their preparations for the 2021/22 campaign by welcoming higher opposition to South Yorkshire this week, beginning with Tuesday’s visit of Newcastle United, before hosting Middlesbrough on Friday.

Ihiekwe has been In fine form during the off season, and Saturday’s late winner against Grimsby was his third goal in as many games. 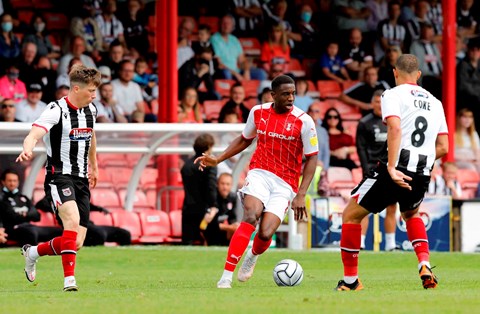 The defender though, insists that as a defender, helping the team is the most important thing. Whether that be scoring or keeping clean sheets.

“The season starts in under two weeks and we’re looking to get fit and firing ahead of that. Scoring goals is something that, as a defender, is always something I can look to improve on.

“From my point of view it is not the be all and end all. Keeping a clean sheet and defending well is more important and goals area always a bonus.

“However, whatever I can do to help the team is ultimately the most important thing for me and if I can help in any way I can, then I will try to do that.”