New Rotherham United recruit Shane Ferguson insists he is relishing the opportunity to earn a regular place in Paul Warne’s starting line-up ahead of the 2021/22 campaign, having put pen-to-paper on a deal until June 2023 at AESSEAL New York Stadium.

Ferguson, who is a capable of operating anywhere on the left flank has been snapped up by the Millers following the expiration of his contract with Sky Bet Championship outfit Millwall. 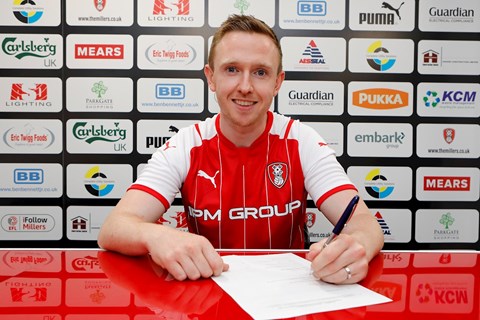 The Northern Ireland international will have no doubt endeared himself to manager Paul Warne after passing his ‘good human-being test’ and Ferguson declared that following his conversation with the gaffer, he was desperate to get the deal done.

“I found out about the interest around a week ago, I spoke to the manager over the weekend and as soon as I came off the call with him I knew I wanted to be here.

“He asked me a few questions to determine what I’m like as a person and other things, I really enjoyed speaking with him. After the call it was a really easy decision for me to join.”

“The ambition of the club and their desire to get back in the Championship really appealed to me, so I’m delighted to be here."

“That is the aim, the manager spoke about it a lot on the call. Obviously, last season we were so unlucky with the games that were called off because of covid and it made it a tough ask.

“I’ll do everything I can to help this club get back to the Championship.”

Ferguson is an experienced campaigner both in the second tier and Sky Bet League One, with numerous caps for Northern Ireland under his belt to boot.

The 30-year-old knows what it takes to be successful in the third tier, having won promotion with his former club Millwall back in 2017 and says he’s now looking to pass on his knowledge to some of the younger members of Paul Warne’s squad.

“I’ve been in this league before and it is a tough league, especially this year. There are a lot of big teams in League One and it’ll be really competitive.

“I’ve played with the likes of Dan (Barlaser) and played against some of the lads we have here and it has never been an easy game. We’ve got a good squad here and I’m excited to be apart of it."

“I know Dan from our time together at Newcastle and it’ll be good to be a teammate of his again, I’m looking forward to it.

"This is a young squad and if I can help out in anyway I’ll do that. I spoke with the staff before and there are a few young lads who are now getting international recognition, which is fantastic and I’ll help in any way I can.”