Rotherham United boss Paul Warne has explained that the loan capture of Ryan Giles from Premier League outfit Wolverhampton Wanderers ends a long pursuit to secure the wing back’s signature, who will spend the remainder of the 2020/21 season at AESSEAL New York Stadium.

The Millers boss revealed that Giles, who turns 21 today, has been a long-term target for the coaching staff and with the current 3-5-2 system being deployed, his signing couldn’t have come at a more fitting time.

"He's a player that we've liked for a couple of years and I've unsuccessfully tried to sign him before, but we've finally convinced him to come.

“We joked that we've printed off about three different shirts for him, so he can have this year's version now!

"At the moment, we are playing with wing backs and recently we let Billy Jones go so we just need a bit more strength in that position. He's a player that we've always liked, so it’s a good addition for us.” 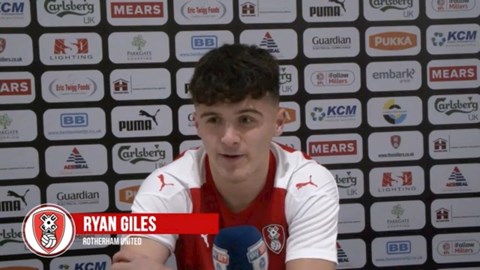 Giles joins the Millers on the back of a spell with fellow Sky Bet Championship outfit Coventry City and following his recall from Wolves, Warne admits that he was keen to bring in a player who ticks a lot of boxes on his criteria list.

“He's got a good footballing brain on him and a bit of experience in the league after playing 19 times for Cov this season.

"He's a left wing back who can play left back or on the left wing, but I just think wing back is his best position.

"The way we play and the way we want to get crosses into the box, he definitely suits us.”

When quizzed on whether the former England youth international would be comfortable operating in a different system, either as a defender or winger, Warne reaffirmed his confidence in his new addition’s ability to adjust, whilst crediting his abilities going forwards.

"Most of the players that we sign have a bit of versatility because more often than not we do change the system and ask players to play out of position quite a lot,” he added.

"I think as a full back he's more attacking than Joe Mattock - so more of a winger than a full back in my opinion. I just think a wing back is the perfect position for him.”