Rotherham United would like to remind supporters that this evening’s game against Derby County in the Sky Bet Championship kicks off at the slightly earlier time of 7pm.

Following the postponement of the originally scheduled fixture back in December, it was agreed between both clubs to kick off the rearranged clash at 7pm, allowing both sides to return home earlier and subsequently help with preparations for the upcoming fixtures this weekend. 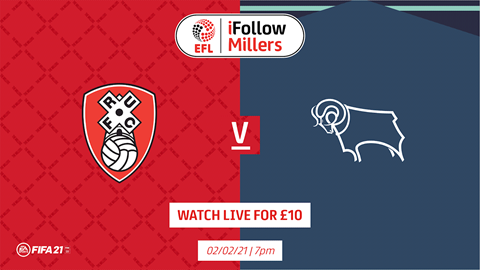 Supporters who purchased an iFollow Millers match pass for the original date will NOT need to purchase another for tonight’s fixture. They must, however, ensure that they are logged into the same account used for the original purchase.

As this evening’s game was set to take place on a Saturday in the first instance, it will NOT be available to watch on Sky Sports’ red button, meaning that the only way to catch all of the action is on iFollow Millers.