During the last 12 months, an additional – but equally endearing - Rotherham accent has been increasingly heard in passing around the club’s Roundwood training base.

However, a new Rotherham-er is fast earning a reputation for his efforts at the training ground having endured a tough year with injury after earning himself a professional contract at the end of his time with the club’s Academy.

Whilst the world has understandably been concentrating on the pandemic we currently find ourselves in, Jacob Gratton has been entirely focused on his rehab for an ACL injury which put on hold his progress as a young footballer.

On our sparing visits to the COVID-19-safe training ground, www.themillers.co.uk have always been greeted by the sight of Gratts undertaking a gruelling weights session or spending time with the physios, but on every occasion, those exchanges have been greeted with a traditional Yorkshire ‘eyup’ and coupled with a smile.

Gratton’s unwavering application and positive attitude has seen him successfully complete his off-field rehab and be reintegrated into training with the first team group and after months of having to watch his teammates go out onto the grass without him, the Academy graduate is delighted to be back doing what he loves.

"I'm absolutely buzzing to be involved again to be honest. I went from one extreme to the other, getting my professional contract to three weeks later being hit with the injury,” he told www.themillers.co.uk.

"I've been out for 12 months now, but I've tried to stay positive about it and look at the good that can come from it. If you just get down about it, it's even harder to get through it.

Gratton is pictured in his leg brace during his rehab

"It has been difficult at times, especially with the lockdown because when you're stuck at home all you can really think about is your injury.

"The biggest aspect of my game this injury has helped with has been my physicality because when I came up last time, I was a way off where I needed to be for men's football.

"The last 12 months that I have spent in the gym have allowed me to address that. A few people have commented actually that I have noticeably improved, so I'm happy with that.”

In typically modest fashion, Gratton’s above reference to his gym work is understated.

Having had the opportunity to speak to the physios working with him throughout his rehab, we understand that the 19-year-old’s commitment to bettering himself has been so great, that he has surpassed some of his senior colleagues on the weights. 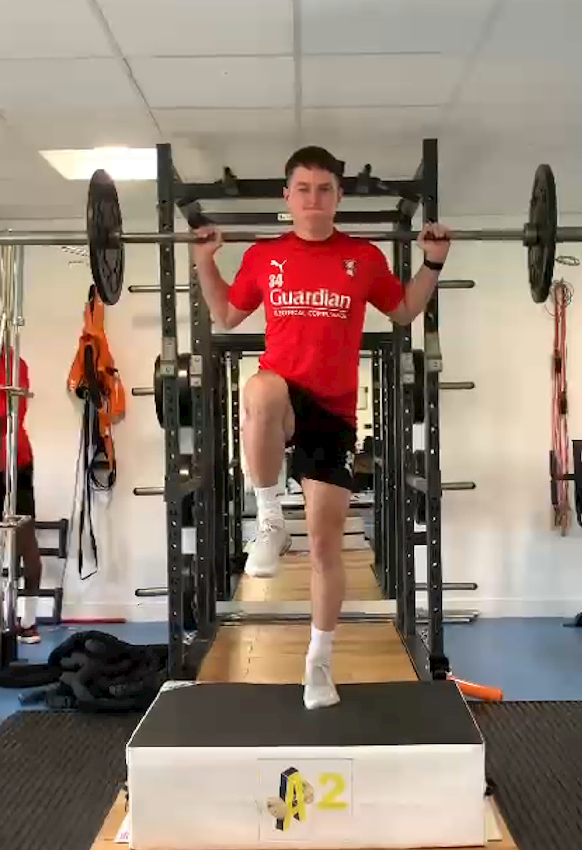 One of many weights strengthening sessions for the youngster

Whilst Gratton would obviously have preferred to be out with a football, the additional time spent in the training ground building has seen him fully become a part of the group, whilst he has also used the opportunity to soak up information from teammates with similar experiences.

"I have been lucky in a sense because Jamie Proctor did his ACL as did Trevor Clarke when he was in Ireland,” he revealed.

“I've been able to speak to those two a lot and they've helped me through the rehab.

"It is good coming from the physios but from a player's perspective it is nice to hear it from someone who has actually been through it and experienced it.”

The exciting attack-minded midfielder will now be looking to pick up where he left off on the football front – albeit with even greater physical powers – and admits that there have already been times during which Hamshaw has been close to having to drag him off after sessions.

"When I'm out training with the lads, I don't want to come in at the minute!

"I know it's a cliche but I feel like I'm making up for lost time,” Gratton reiterated.

"Hammy told me to come in off the training pitch the other week before the session had finished so I didn't injure myself, but it is so hard to hear when you've been out that long.

"It is just about getting that sharpness back. Robbo has been injured as well and I've been doing a few drills with him. I found that in holding people off I felt a lot stronger in terms of that.

"I don't feel like I've lost any technical ability, whatsoever. I just feel like the whole experience has made me a lot stronger mentally.

"I'm glad to be coming out the other side of it now and I just want to get playing again.”

The Thurcroft-raised Miller concluded by once again reaffirming the ‘good human beings’ tag that has been so frequently used to describe first team players and staff, explaining that he now feel right at home with his fellow professionals at Roundwood.

"This injury has given me time to go through the 'bedding in' process at the training ground,” Gratton continued.

“I think I would have been okay anyway, but it is a big thing coming from youth team football straight into first team training.

"I think this injury has allowed me to get to know all of the lads a bit better and in fairness, they have all been class with me. I count myself really lucky in that sense."

Even Gratton’s family may not have spent as much time with the youngster as the club’s first team sports rehabilitator, Matt Lowndes, who has been there almost literally every single step of the way.

Lowndes, who has worked with countless senior professionals since joining the Millers backroom staff, has been taken aback by the application of a young player who was dealt such a big setback just weeks after the euphoria of being handed his professional contract.

“From Day One Gratts has been an absolute pleasure to work with, and that is a compliment in itself because it would be so easy to get down and lose motivation, especially in the current circumstances,” he told www.themillers.co.uk.

“An injury as significant as his is enough to challenge anyone’s physical and mental strength to the max, but to experience it so early in your career is a real test of character.

“Through both the rough and the smooth of the rehabilitation process Gratts has worn the biggest smile on his face – usually coupled with a few beads of sweat on his brow!

“Every single day he has pushed himself harder than he did in the previous one. That attitude coupled with his determination over the last 11 months has seen him top the leaderboard for the entire first team squad in a number of gym and running tests and getting to those levels has definitely now given him the platform to go on and have a successful career. 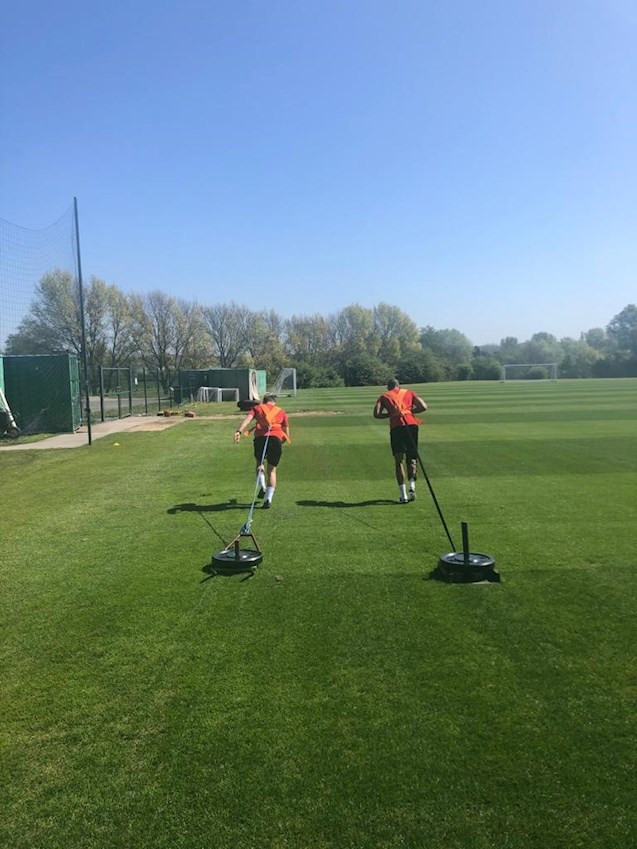 “I know that I speak on behalf of all of the medical department when I say we’re looking forward to seeing him put a Millers shirt on for the first time.

"He has been incredible to work with and whilst part of us is sad we’ll see less of him at the training ground, the good news is that is because he’ll be back out there doing what he loves.”