Following confirmation of Matt Crooks being crowned as the Sky Bet Championship Player of the Month for January, Rotherham United Chairman Tony Stewart has spoken on behalf of the Board to express the club’s congratulations to the attacker.

Crooks swept aside competition from three fellow second tier operators who have also been in red-hot form in recent weeks to land the coveted award, with his contribution to the Millers’ recent upturn in form not going unnoticed by the club’s hierarchy.

Speaking to www.themillers.co.uk after Crooks had officially been announced as the star man in the division for the month of January, the Chairman heaped praise on both his individual efforts and those of the squad.

“It is fantastic to see Crooksy recognised with what is the highest individual accolade a player can receive and it is no less than he deserves after a sterling run of form for us,” Tony Stewart beamed.

“I wanted to congratulate him on behalf of the Board and everyone here at the club because we should celebrate achievements such as these when they are presented to our club, staff or our players.

"We are so proud of how well the management and players are performing at the moment and felt it should be put into words so that they know what a good job they are doing.

“To eclipse the form of everyone else in the division on an individual level is no mean feat and Matt was simply excellent in January. His own performances have coincided with a marked improvement throughout the team, and as our manager Paul Warne so often reaffirms, this side really is a sum of its parts.

“We do feel that as a club, we sometimes don’t get the recognition we deserve but rest assured, we are so incredibly proud of what is happening here at Rotherham United. We are always internally motivated here at the football club, but on this occasion, it is fantastic to have had that praise come from the outside and Matt and his teammates should all be delighted that their efforts have been noted on a national basis.

“I would like to thank everyone involved with the first team for their tireless efforts in recent weeks and I am so pleased that the results that have been a biproduct have seen us begin to move in an upward trajectory in the Championship. The second tier is an exciting division with the finest of margins deciding games but I know that our lads will leave no stone unturned as we look to achieve our aims this season.” 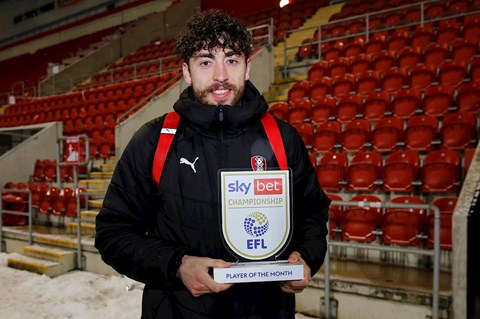