Rotherham United are delighted to confirm the loan capture of Rarmani Edmonds-Green, who arrives at AESSEAL New York Stadium from Huddersfield - subject to EFL and FA ratification - as a busy week continues to unfold on the transfer front for Paul Warne's side.

Having added Hakeem Odoffin to the ranks yesterday, Warne was able to confirm his fourth signing of the summer as the 22-year-old has put pen-to-paper on a loan deal which will see him remain with the Millers until the end of the 2021/22 Sky Bet League One campaign - but includes a recall clause in Huddersfield Town's favour during the January transfer window.

Edmonds-Green is a young centre-half who quickly progressed through the Academy ranks in West Yorkshire, having joined the Terriers at Under-18 level.

Hailing from Peckham in London, the young defender first caught the eye at John Smith’s Stadium during his time with the Nike Academy.

Having initially joined on trial in 2018, he impressed in the Under 18s Professional Development League game against Crewe Alexandra later that month, earning himself a permanent switch to the West Yorkshire-club.

During the 2016/17 campaign, he was named captain of the club’s U18s side, making 19 appearances and scoring twice before stepping up to the Under 23s in February 2017.

Becoming a regular in Town’s development side, Edmonds-Green was named ‘Defender of the Tournament’ as the Terriers finished fourth in the U19 Champions Trophy, held in Dussledorf in April 2018.

The youngster was sent out on loan to further his footballing development during the 2019/20 campaign, initially joining National League outfit Bromley before another temporary switch in January 2020, helping Swindon Town to the Sky Bet League Two title. 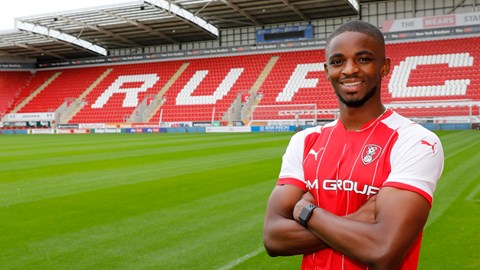 He was rewarded for his fine form on loan with 24 appearances for Carlos Corberan’s side last term, in which he scored twice. His most recent strike being a 90th minute equaliser against Reading on the final day of the season.

Click HERE to watch Rarmani's first interview after joining the Millers on loan.