As part of the EFL’s collective continued efforts to eradicate the piracy issues surrounding its iFollow service, Rotherham United would like to take this opportunity to remind supporters of the impact that obtaining a stream through unofficial channels is having on our club and many others around the EFL.

Not only is piracy significantly affecting income streams during a time in which we are relying on the revenue generated from iFollow passes in the absence of matchday ticketing sales, it is illegal.

With the 2020/21 campaign being played behind-closed-doors to date, our reliance on the funding generated from video match streaming is greater than ever.

Almost 7,000 illegal EFL streams have been detected so far this season – with an average of 170 people viewing each stream – that is almost 1.2 million people.

The EFL and subsequently its clubs could potentially lose at least a third of its income as a result of illegal streaming this season and the reality is that this figure is much higher, as it is almost impossible to detect every illegal stream.

Rotherham United retain 80% of the revenue from each £10 video match pass sold – if 1,000 people opt to illegally stream a fixture instead of purchasing through the officials channels that is £8,000 of revenue which the club are missing out on for one single fixture. If the same applied for 10 games, the club misses out on £80,000.

The Millers are joining with the EFL’s other 71 clubs in supporting an anti-piracy campaign which aims to send a strong message regarding the financial impact that the issue is having on clubs.

To put the enormity of the issue into context, over half of sports fans consume sports content from private services at least once a month, with over a quarter of those using illegal sites and services for which they have paid for access.

Here at Rotherham United, we understand that we are living in challenging times and many will have suffered financially as a result of the COVID-19 pandemic but illegally streaming our matches could land you in trouble.

Piracy can be punished with both civil and criminal action and we would hate to see our supporters handed even more obstacles to navigate in life, in already trying circumstances.

We will continue to work closely with the EFL and their partners Opsec to identify illegal streams on all formats and it will be these organisations who take action against businesses and individuals.

Supporters are encouraged to report any illegal streams they come across or pubs that may be showing EFL content unlawfully by emailing piracy@efl.com. All emails will be treated confidentially.

We are incredibly keen to maintain our fantastic relationship with our fanbase from afar during these unprecedented times and we are so grateful for the ways in which you have supported us to date. 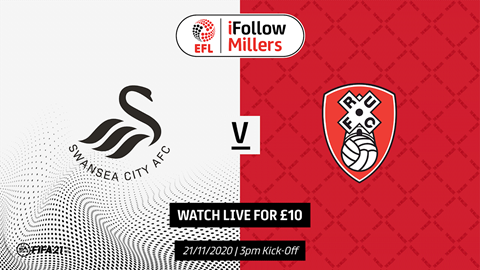 We hope that you are able to recognise that the above messaging is to highlight the impact that piracy is having on clubs like Rotherham United, during a time when other revenue streams have been put on hold.

Thank you for reading and we hope that you join us on iFollow Millers for this weekend's game at Swansea City.