Alongside the club doing well on the field this season, the Rotherham United FC first team have been contributing to the community off the field by visiting many setting and organisations which the wider club works with. Leading the way with this is club Captain Richard Wood.

Richard has been paying visit to setting across the borough since joining the club, and has played a central role in ensuring the importance of community visits is understood and valued amongst the first team.  Richard has visited hospitals, schools, hospices, holiday camps, club education settings, and has paid numerous visits to young people facing adversity.

Richard Wood commented “We all understand where the club sits within the community as it is a focal point for the town. It is important that we do give back to the community and help out where we can. It’s something that all the players understand the value of to the club and community. “

“We would also like to place on record, our thanks to the PFA for their continued support.”

Head of Community, Jamie Noble stated, “Player Appearances create such as buzz in the setting which we work with. It really helps to further improve the impact we have amongst the community, particularly in settings where the people we work with can be vulnerable and really in need of a special visit from a pro team player. Richard has been integral to this, as he leads by example on the pitch, but also in the community.”

As a result of Richards outstanding contribution over many years, Richard has been nominated for the EFL ‘Player in the Community’ Award which was won in 2019 by none other than the former Millers favourite Will Vaulks. Good luck Woody and thank you for your continued support.

The Professional Footballers’ Association (PFA) was formed on 2nd December 1907 and is the world’s longest established professional sportsperson’s union.

The aims of the PFA are to protect, improve and negotiate the conditions, rights and status of all professional players by collective bargaining agreements.

If you would like to find out more information about the PFA, please visit https://www.thepfa.com/thepfa/about. 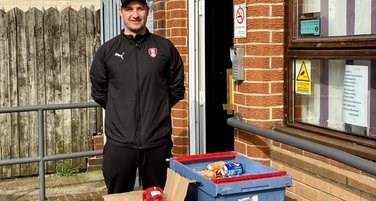 
Rotherham United’s Community Sports Trust are ensuring that they are still able to make an impact in the local area, despite having to reduce their services as a result of the COVID-19 outbreak, and...