Rotherham United are backing the fundraising efforts of the Millers-supporting Moran family, who are looking to raise money for their daughter Erin after receiving the devastating news of her diagnosis of an inoperable brain tumour.

Erin, who despite her tender years has already been introduced to Rotherham United by her dad, Chris, received the heartbreaking news of the DIPG brain tumour – one of the most fatal of children’s brain cancers – and close family friends are now looking to raise money on a GoFundMe page to give her the best possible chance of winning her battle.

A number of Rotherham United first team players have already pledged their support to Erin and her family with donations on the fundraising page which can be found here, and we are hopeful that by publicising their efforts for their little girl, many more Millers fans will also find it in their hearts to give what they can. 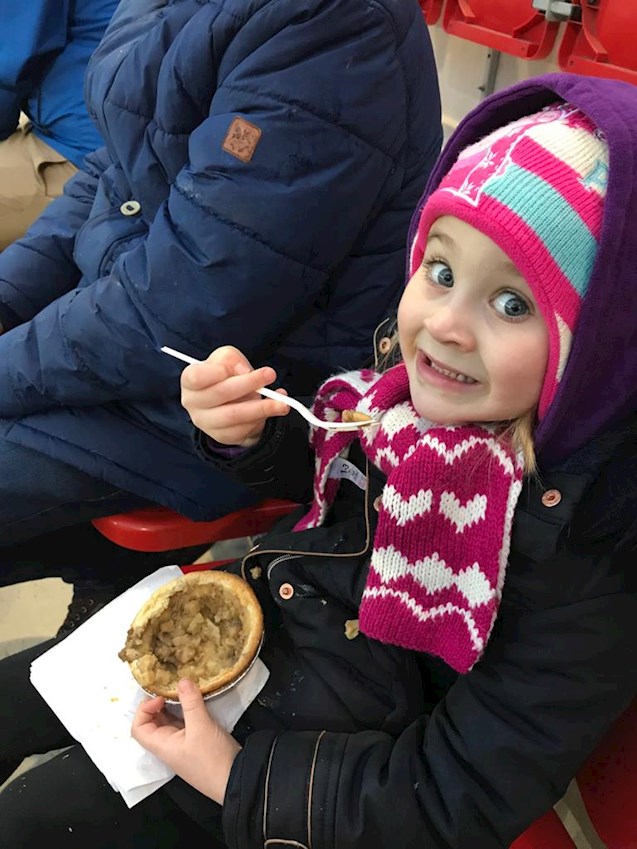 Erin is pictured on a trip to see the Millers

DIPG tumours are high grade and grow quickly - which means that symptoms develop swiftly, over a short time-frame and can be disabling. The tumour attacks the brain stem affecting breathing, body temperature, heart rate, eye movements and swallowing.

Erin started with a squint on 19th April this year and was subsequently seen at the opticians on 23rd April, leading to an urgent eye clinic appointment the next day. A CT scan was done at this point in paediatrics where it was initially thought that they could rule out anything life-threatening. On 29th April, Erin developed slurred speech and was taken by her parents to A&E where again she was discharged. On 3rd May, Erin had weakness in her right arm and then a day later her right leg weakened too. A further eye clinic appointment led to her being sent to paediatrics again and on 5th May where Chris and Nina were told that an MRI scan had found a lesion on the Pons – part of the brain stem. On Wednesday 6th May, they were given the utterly devastating news that they were going to lose their little girl.

The prognosis for little Erin is incredibly upsetting with the average life expectancy from diagnosis being less than one year. Beyond that, only 10% live for at least two years, while just 2% survive as long as five years – even with treatment.

The GoFundMe page has been created in the hope that Erin can defy the odds to beat this terrible disease by going overseas. At present, due to the DIPG tumour being in such a delicate and important part of the brain, surgery isn’t possible in the UK.

The standard of care for DIPG at present is radiotherapy alongside chemotherapy, and researchers are still looking into how they can improve the diagnosis and treatment of children with DIPG. Erin has had a five week course of radiotherapy & chemotherapy to try and shrink the tumour in the hope that it will ease her symptoms. Scans are ongoing but initially the treatment makes the tumour and surrounding tissue swell so it is too early to tell how effective the treatment has been until the swelling has gone down.

In a condition such as DIPG the outlook is one of sadness and despair, and understandably Chris and Nina are seeking opportunities for alternative treatments with specialists across the globe, to try and improve the outlook for their precious little girl.

With these options Chris and Nina have had to weigh up what they are willing to put Erin through and have to give consideration to expense, viability and availability of the treatments in the hope that there is something out there for Erin.

After several video consultations, Chris and Nina have made a decision on the best way forward for Erin, and she has been accepted for treatment by Doctor Jürgen Arnhold in Frankfurt on an ONC201 medical trial. This treatment comes at a significant cost however.

The aim is to raise some funds to help support Chris, Nina, Erin and indeed all of the family through this awful time and to give them the chance to help their daughter in any way they can.

If you are able to contribute, then please do. The family have a lot to take in and deal with at the moment so please respect their wishes for privacy – we assure you that any donation will be gratefully received and all donations will add up together to provide the support that is needed.

If you would like to make a donation to Erin’s cause, please visit the GoFundMe page here.