Victory in Nottinghamshire for the Millers...

Rotherham United continued their preperation for the 2020/21 Sky Bet Championship season with an impressive victory over Mansfield Town at One Call Stadium.

After an even opening period, the Millers opened the scoring through Joe Mattock, as the left-back came off the bench to curl in a stunning free-kick.

Paul Warne's side doubled the lead just past the hour mark courtesy of a stylish back-heel from Michael Smith and the victory was rounded off right at the death through new addition Mickel Miller, who nipped in at the near post to score.

The hosts had the better of the opening exchanges and were presented with an early opportunity after four minutes when Andy Cook had his heels clipped by Adam Thompson. 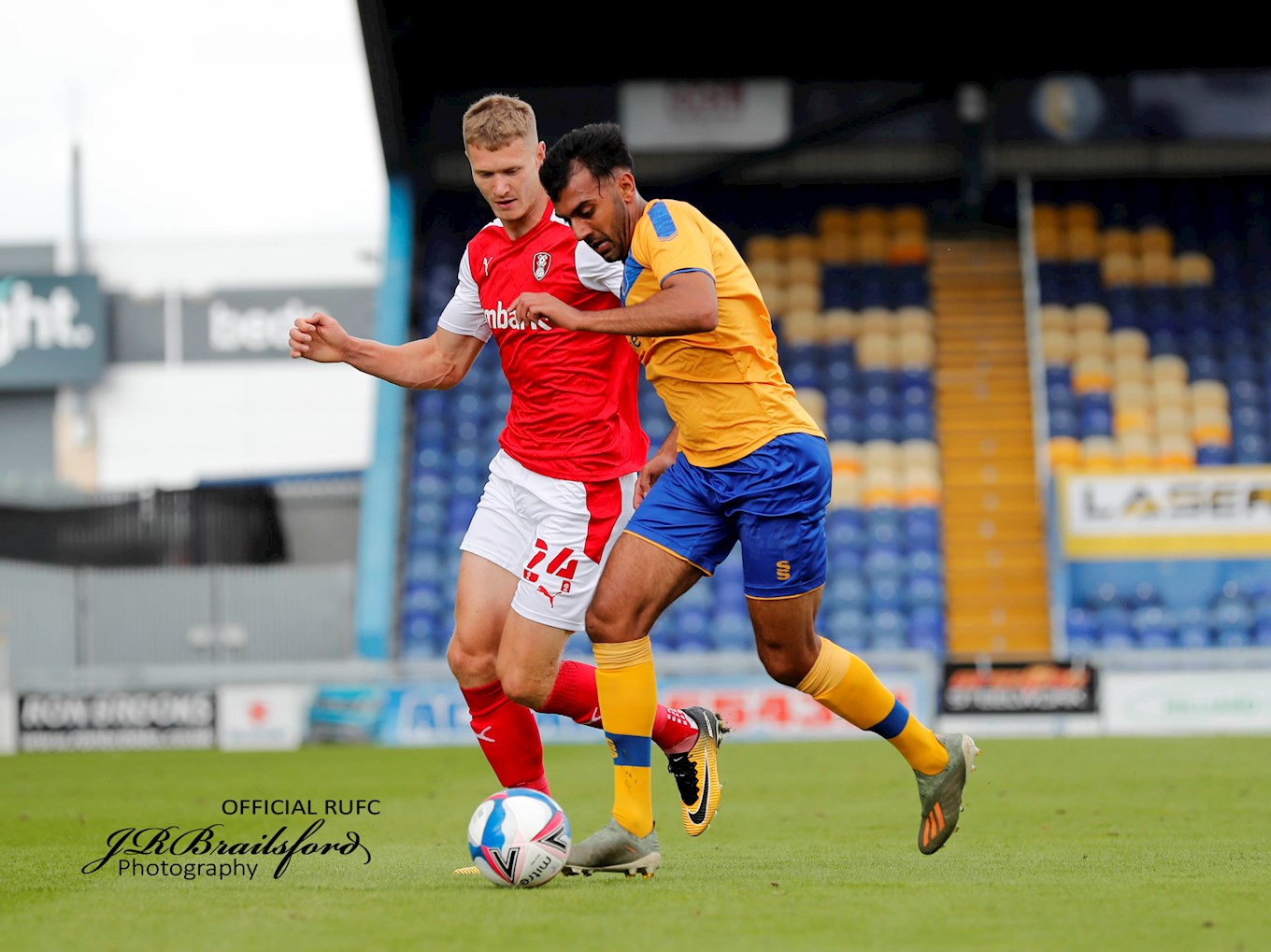 George Maris set his sites from the freekick but could only place his shot over the crossbar. Moments later, Harry Charsley curled in a cross from the right which the trialist keeper had to tip onto the crossbar.

From the resulting corner, Mal Benning found himself in a pocket of space, but he could only blaze his effort over from range.

The Stags should have taken the lead midway through the first half. Ex-Miller Jordan Bowery found Corey O’Keeffe in space and his wicked ball into the box was met by Benning at the back post, but the defender failed to hit the target with the goal at his mercy.

The Millers threatened on 30 minutes. Michael Smith fed Trevor Clarke on the left, but he lifted his effort over. A minute later, Matt Crooks picked up a loose ball in the middle of the park and drove forward, but could only find Marek Stech’s hands with a low effort.

Paul Warne’s men went close again through Shaun MacDonald 10 minutes before the break. The midfielder was teed up by Crooks from range and saw his fine volley saved by Stech.

Graham Coughlan’s side squandered a glorious chance to take the lead five minutes before the interval. Charsley made headway down the Stags’ left before his low cross fell to Maris who looked certain to score before a timely goal-line clearance from Clark Robertson to deny him.

Three minutes later and it was Rotherham’s turn to go close. Wiles found Crooks with a carefully threaded pass and the midfield teased in a low cross which looked destined to find Miller, before the winger unfortunately lost his footing.

After the restart, a neat passing move presented the home team with an opportunity as Charsley advanced down the right, he squared for Cook, but the striker couldn’t convert on 47 minutes.

The Millers took the lead three minutes later thanks to a stunning strike from substitute Joe Mattock. The full-back made no mistake from a dead-ball after a foul on Miller by a Stags defender. The left-back set his sides and curled his free-kick over the wall and past Stech.

Warne’s men went close to adding a second on 56 minutes, when Wiles won a freekick in a wide position. Mattock again was accurate from the set-piece, planting the ball into a dangerous area but Stech just nipped in ahead of Smith to punch clear.

The Millers did not have to wait long to double their advantage, however. A nicely worked attack from Warne’s side ended with Ogbene delivering a peach of a ball across the box which Michael Smith stylishly back-heeled home on 62 minutes. 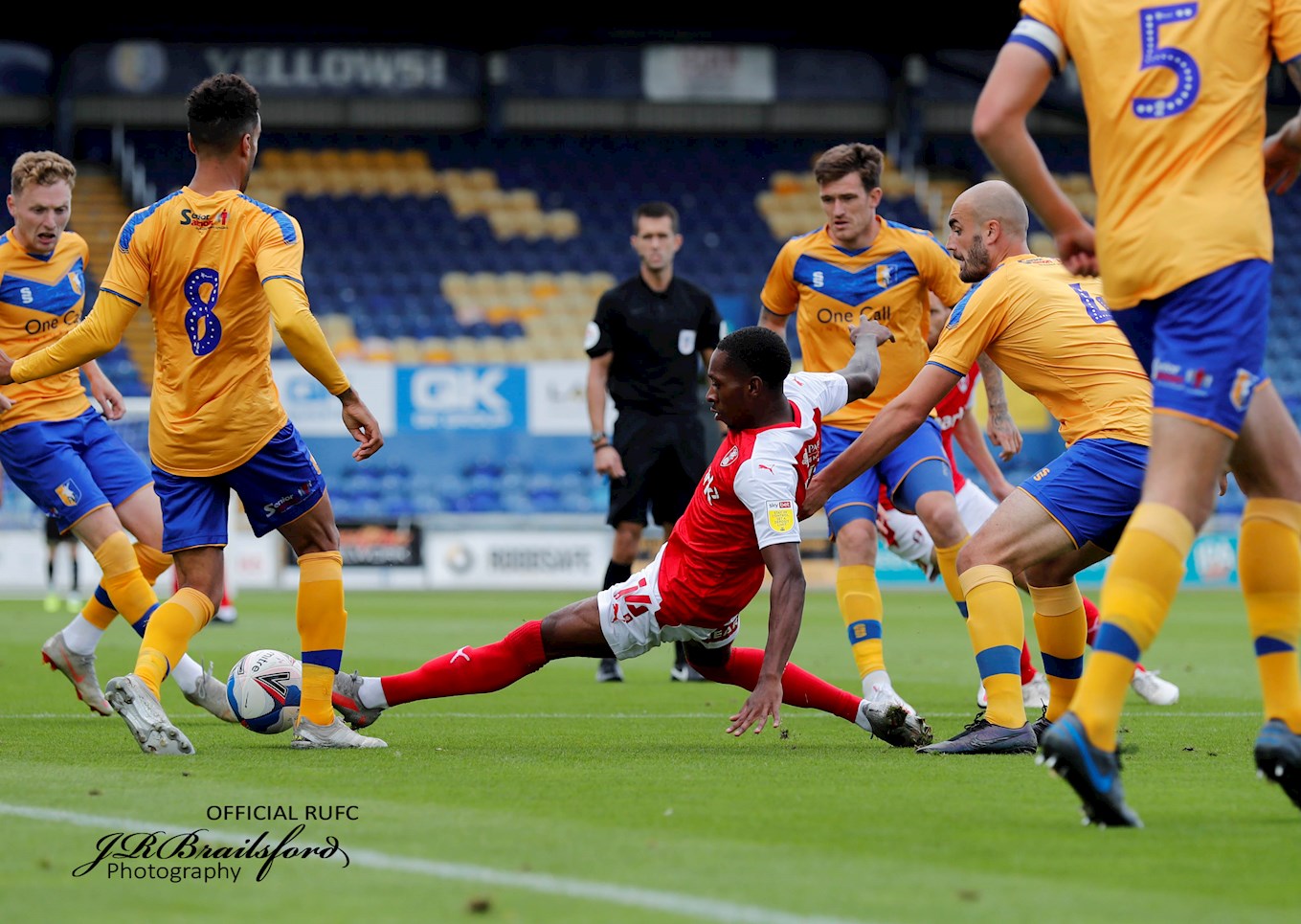 With 20 minutes left, Miller picked out Ogbene with another outstanding delivery, but the winger could only direct his header into the arms of the goalkeeper from close-range.

The Millers were presented with the opportunity to extend their lead further 15 minutes from the end. Wiles picked out Mattock with an exquisite cross-field pass and the defender advanced down the left but again Stech was there to beat away the danger.

The hosts responded through another ex-Miller as Farrend Rawson skewed an effort wide from inside the box for the Stags, with 12 minutes to play.

The visitors added a third two minutes from time through Miller. Again, Mattock was the provider with a pin-point free-kick and the new signing stepped in at the near post to score.