Rotherham United were once again out in the local community to help distribute essential items to those supporters unable to leave their homes amid the COVID-19 outbreak and this time it was forward Freddie Ladapo on delivery duties on Friday.

Following a phone call from the Community Sports Trust, we received a follow-up letter from the daughter of one of the fans that we had called, explaining that it would really lift her dad’s spirits during these difficult times if a member of the first team was able to personally drop off some shopping.

Upon receiving this information, Millers top goalscorer Freddie Ladapo gladly volunteered his time to go out and make the drop-off for lifelong fan Peter Whiting on Friday afternoon.

Accompanied by Head of Community Jamie Noble, Freddie paid the avid Rotherham United supporter a visit in his Herringthorpe home with some essential items, before staying to chat with Peter from a safe distance.

Peter kindly informed us that his neighbour Trevor was also a big fan of the club, so Freddie stopped by his house to check, again from afar, on the well-being of another Miller before returning to the safety of his own home as per Government advice. 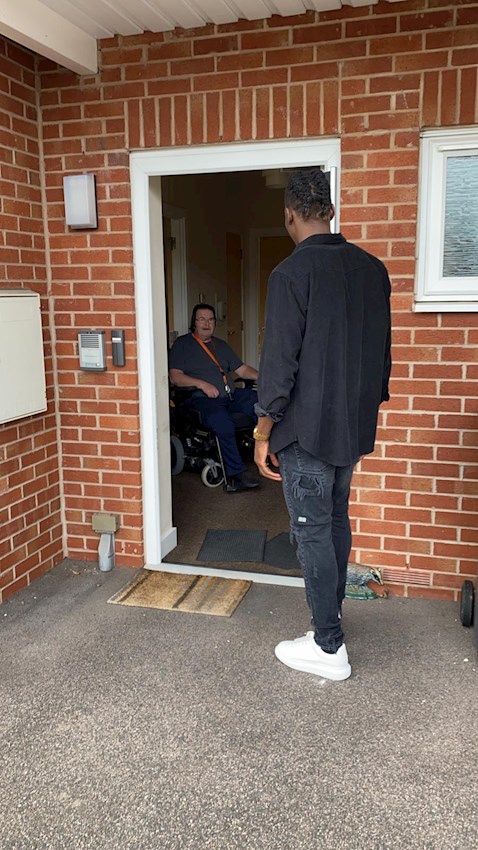 Freddie chats to Peter's neighbour Trevor after making the drop-off.

Head of Community Jamie Noble, whose staff in the Community Sports Trust are making numerous food and medicine drop-offs for the vulnerable in the local area among other duties, was delighted to see another member of the first team involved in playing a part during these difficult times.

“It was fantastic to have Freddie come along and make this delivery for us because it just allows us the opportunity to put a smile on the faces of our supporters, on top of getting them the essential items they need,” he told www.themillers.co.uk.

“Freddie didn’t think twice about getting involved when we made him aware of the situation and it was great to see him go above and beyond by stopping by to speak to another supporter in the area, while respecting the social distancing measures currently in place.

“We talk about it a lot, but I think this is further evidence of the ‘good human beings’ that Paul Warne and his staff have recruited, and the Gaffer really leads by example, as we saw a week previously when he went to visit Margaret and John.

“Whilst the club is working on a reduced staff base, we are still making it our priority to ensure that we can help our supporters everywhere we can.

“We want to make sure that nobody out there is struggling, we’re only at the other end of the phone and are more than willing to help with drop-offs of food and medicines, or anything else that we can feasibly assist with.”