Divisional winners announced in the Sky Bet Championship, League One and League Two...

Preston North End, Doncaster Rovers and Exeter City have been recognised as offering the best away days in the EFL this season.

Over 1.5million away fans attended matches across the 2018/19 EFL campaign, a third consecutive season that figure has been surpassed.

The EFL Away Fan Experience Campaign measures the experiences of genuine away fans, gathered from visits spanning across all 72 EFL Clubs, in order to recognise the top performers in each division.

Fans are asked to report back on a number of touchpoints ranging from information and first impressions; to quality of refreshments and the inside the stadium experience. The feedback assists Clubs in their ongoing efforts to enhance the matchday experience and levels of engagement for visiting fans across the EFL.

Across this season’s visits many Clubs received praise for the quality of staff engagement and stewarding, pre-match SLO interaction, ability to enjoy mixed fanzones and refreshment facilities, as well as the atmosphere and unrestricted views on offer once inside the stadium.

Championship winners Preston North End’s excellent away fan guide provided detailed information for away supporters travelling to Deepdale, whilst also outlining their rich history. They received praise for their staff engagement, social media content and the overall friendly welcome from all associated with the Club.

League One winning Club Doncaster Rovers received significant praise for their away supporters’ family zone, and were commended for having a genuine understanding of travelling fans, and staff being accommodating and engaging throughout the matchday experience.

Exeter City led the way in League Two with away assessors describing the welcome they received as ‘one of the best they had experienced at an away ground’. A family-friendly atmosphere was created with the use of excellent facilities for supporters of all ages, with their fan liaison staff highly praised for collectively demonstrating great passion and enthusiasm for the Club.

In recognising the awards, Shaun Harvey, EFL Chief Executive, said: “The atmosphere and friendly rivalries created by those fans travelling up and down the country to support their Club undoubtedly enhances the matchday experience for all supporters. 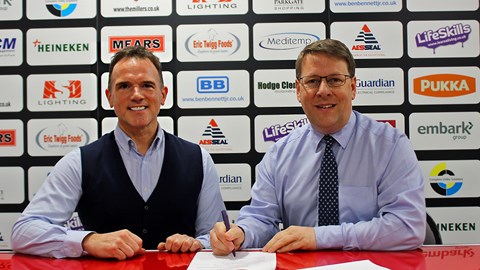 “It’s that passion, tribalism and wanting to play a tangible part in the outcome that really sets football apart from other sports and we are proud that the away fan experience continues to grow from strength to strength across the whole of the EFL.

“For the third consecutive season we have seen over 1.5million away-day match tickets sold. That only further emphasises the fantastic work EFL Clubs are doing, week in, week out, to continually attract significant numbers of supporters through turnstiles.”

The Football Supporters’ Federation have collaborated with the EFL in researching and supporting the work around the Away Fan Experience Campaign, and Deputy Chief Executive David Rose is keen to pay tribute to those supporters who passionately follow their Club week-in-week-out, but also the Clubs for continually providing a positive matchday experience.

He said: "The FSF welcome anything that encourages clubs to focus on how they treat away fans and are delighted the EFL have once again recognised the efforts of those clubs that go the extra mile.

“We hope that by shining a light on these great examples that more clubs will be inspired to provide a welcoming experience for some of football's most committed supporters."