The club can confirm that French winger Julien Lamy will become a Rotherham United player on July 1st subject to international clearance, FA and EFL ratification.

The 19-year-old attacker joined Paul Warne’s side for their return to pre-season this morning after successfully impressing during a spell as a trialist with the club last season.

Whilst a deal has been in the offing for some time, Lamy will officially become a Millers player on the 1st July subject to the above clearances and signs a deal that runs until June 2020.

Paul Warne was quick to praise Lamy for his attitude towards life with Rotherham United so far and hopes his credentials see him flourish during his time in South Yorkshire.

"We had him in for a couple of games [last season] and he did well," Warne told www.themillers.co.uk.

"He has got the raw materials but we will have to do a lot of work with him.

"I really liked him as a kid and I still do. He spoke to me a few times about how we can improve him and what we can do and his attitude was spot on.

"He's come back in good shape. As I speak, seven lads have done the running and he's been the quickest of them, so that always puts him in good stead with me."

The Millers boss continued to add that Lamy's flexibility was another factor in his decision to bring the Frenchman to the club, but admits that like many new signings before him, he may take time in adjusting to the rigours of Warne's intense fitness demands. 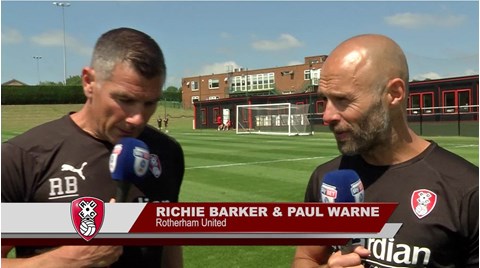 "It's another option for us," he continued.

"Julien can play anywhere across the front three or anywhere in midfield so hopefully with a bit of work, he'll turn into what we want him to be.

"I think he's still a development project and in fairness to him, it is some step from where he's come. Even just having full-time training is going to take it's toll on him.

"As I stand here talking to you now, I expect great things for him, but I don't expect him to start the first game of the season. That said, who knows. Sometimes the opportunity comes for you when you least expect it and if he performs to the level we hope he can then I'm not afraid to throw him in.

"I do forsee him playing a part this year but if you asked me to name my eleven now, he probably wouldn't be in it, but that doesn't mean he won't be.

"He's a loveable kid and he can't stop smiling.

"Certain people work at this club and they work because of how we are as a staff and he is definitely one of those. He is perfect for us in that respect."