As part of our ongoing efforts to ensure AESSEAL New York Stadium is a safe and enjoyable environment for all supporters, Rotherham United would like to remind supporters of some key safety messages ahead of Saturday's Yorkshire derby with Leeds United.

Bag searches will be again in operation and with a capacity crowd expected, we advise supporters to arrive early to avoid an unnecessary queues at the turnstiles. Whilst we will do everything to get supporters in as quickly as possible, we will not compromise standards with our searching policies, therefore we strongly advise that you arrive early.

Bags will only be allowed into the stadium that are no bigger than 35cm x 20cm x 20cm. This will assist our stewards to search people quicker, thus reducing any queues at the turnstiles. Unless it is absolutely necessary please leave bags at home.

Prohibited items include, but are not limited to, purses larger than a clutch bag, coolers, briefcases, backpacks and luggage of any kind.

Over recent weeks many supporters will have seen bags being tagged by stewards and this will remain the case. Once your bag has been tagged please do not remove that tag until you have left the ground.

Pyrotechnic dogs will be in operation in and around the stadium on Saturday. They are trained to detect both pyrotechnics and drugs. Anyone found with either will be refused entry by stewards and handed over to the Police for further action.

Rotherham United would like to request that all supporters remain in their seats at all times during Saturday's match with Leeds United.

The safety of players, managers, fans and match officials is of paramount importance and supporters who encroach on the pitch risk facing a banning order as well as a criminal conviction, while the Club could also face financial penalties as seen recently when another Club was handed a £12,000 fine for a pitch incursion by the FA.

We therefore ask that you support us in this way and remain in the stands at all times.

Thank you for your continued support. 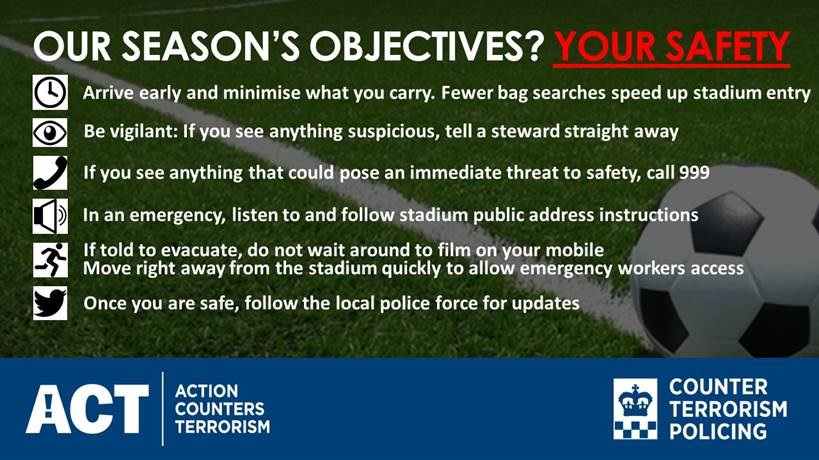 We recommend supporters watch the below video which provides useful information in the event of an attack.

We again thank all supporters for your co-operation.