Defender Clark Robertson says there will be no FA Cup hangover going into this weekend’s showdown with Ipswich Town, as Paul Warne’s side gear up for a trip to Portman Road.

The Scottish centre-half was part of the side that endured defeat at Manchester City last weekend, returning to the side after an ankle injury ruled him out of the New Year’s Day success against Preston North End.

Despite a heavy defeat in the Cup, Robertson says there won’t be any lasting damage to morale, accepting a powerful City outfit would have done the same to most clubs in the football pyramid. 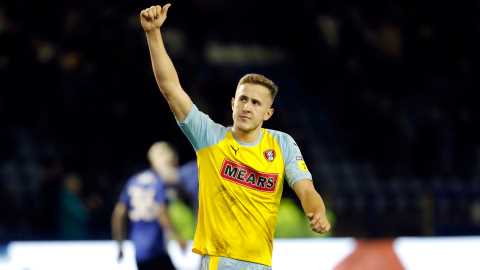 The focus now is ensuring a performance at Portman Road, with the importance of the game not lost on the ex-Blackpool ace.

“Whilst we were all excited about going to Manchester City, we knew the Ipswich game was coming and we knew the importance of that,” he told www.themillers.co.uk

“Obviously we wanted to do well, and test ourselves against the best players in the world. I thought after their first goal we settled okay, and up until five minutes before half-time we were well in the game. It has gone now, we all took in the experience of playing at the Etihad but we all knew as soon as the game was finished, attentions were focused straight on Ipswich.

"Ipswich are also fighting for their lives so we know it'll be a difficult game. There's no reason why we can't go there and perform like we know we can do, and if we do then we know there's a chance that we can pick up an away win.”

After joining the Millers during the close season, the 25-year-old had to be patient as he waited for his opportunity in the starting 11.

The form of others and injury ensured a delay to making his Championship bow, but following a start at Middlesbrough he hasn’t looked back, with the Aberdeen-born defender happy with his recent run in the side.

“I have been happy with the way things have been going,” he added.

“My performances have been pretty consistent. I had to be patient to get into the team but I have done well to keep my place because there are players behind me now ready to take my spot. I need to ensure I keep my performances high.

“It was difficult at the start of the season. I came here from Blackpool and there I was used to a different style of football, so it took me a couple of months to settle down and get used to my surroundings.

“Woody and Semi were doing really well so I had to wait for my opportunity. I got a chance against Middlesbrough away and we kept a clean sheet there and I have just kicked on since then. My performances have been high, but I need to keep them there because as the manager says there is always someone else ready to take your spot.”