Former Rotherham United Academy player Ross Dickinson is flying high in the United States following his departure from South Yorkshire as he nears the end of a scholarship in Florida which has seen him combine his footballing talents with a degree in aerospace engineering.

After ending his affiliation with the Millers in 2016, Dickinson jetted across the pond to take up the opportunity at Embry-Riddle Aeronautical University in Daytona Beach, where he has been studying for the last three years, whilst also representing their soccer team in conjunction with his studies.

Upon one of his regular visits to the UK, Dickinson dropped in to the club where he spent his formative years in combining football and education as a scholar with the Millers, to explain how his life has changed since taking up the exciting new opportunity in Daytona, Florida.

“When I didn't get a pro here I just wanted to try something new really,” he told www.themillers.co.uk.

“I wanted to travel and meet new people. To do that whilst you're getting your degree is great and there's still the option to play football after that if you want to pursue it.

“I've been there for three and a bit years now and I'm going into my senior year next year.

“It's a really good lifestyle. You do your athletics, your soccer, you're working out all the time and keeping fit. You tend to have training in the mornings and college in the afternoon and the education side of things does take up most of your time.”

Dickinson’s new venture could see him involved in helping transport Millers fans to far flung destinations on their holidays in the future, with his career path potentially leading him into designing technology used in aircraft engines.

The former Millers youth midfielder admitted that he never envisaged become so encapsulated by his studies and says having the option of pursuing a career in aerospace engineering or football when his course comes to an end are fantastic to have.

“Initially I went there for the football but I've grown to really enjoy my degree and I'm looking forward to the future with that,” Dickinson added.

“Before I went out there, I'd never considered doing engineering, never mind anything to do with planes, but now I'm three years in, I'm really, really enjoying and actually hoping to do a Masters in it as well.

“I'm trying to do concentration in propulsion, so engines on aeroplanes and potentially drones. Then there's the Defence side of things that I could look at.

“I would 100% recommend it. Looking back when I wasn't offered a contract I was gutted. Football had been my life for the 15 years before that but I'm really happy where I am now. It's nice to have the degree to and to have that option.” 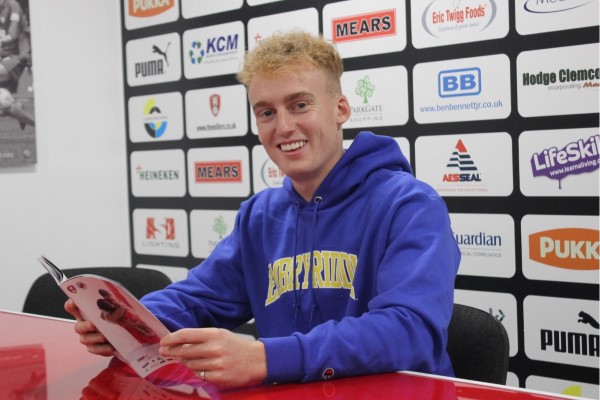 Dickinson continued to explain that finding the balance between devoting time to his studies and sport has been tasking at times, but insists that provided you are willing to knuckle down, success in the two fields fall hand-in-hand.

“The balance isn't too bad but you have to make sure you're working hard constantly,” he added.

“I've had the option to do some coaching too but I haven't really had the time.

“In our league there's a draft system in place and scouts from the American leagues come in and pick players. I still love playing football and I focus on both that and my education. I work hard in both areas but I'm happy because I know if I don't get anything in football, I've still got my degree and I've got a good career to go into.”

The former Academy midfielder says that living away from home during his years in South Yorkshire as a scholar prepared him for being thousands of miles away across the pond, but still finds time to visit home regularly.

“I'm living with two other players from the team, after living in dorms for the first couple of years,” Dickinson explained.

“I come home after every semester, so every four months or so. In the summer I'm back for a bit longer. I moved out of my family home when I was 16 to go into DIGS during my time at Rotherham, so I'd had a taste of being away from home comforts before going out to the USA.

“You get enough for rent and the cost of living but when I come home I tend to get some shifts somewhere for a bit of pocket money which I'll use for Spring Break or a bit of travelling after term has finished.

Dickinson concluded by placing on record that coming across people from across the globe has been one of his favourite things about the experience in the United States.

“I think the best thing about it all is the people that you get to meet,” he beamed.

“You come across people from all over the world. I could go to Sweden, Norway or Iceland and loads of other players and stay there for a week through people that I know, who have become mates.

“I definitely want to stay out there and try and get a work VISA.”