Most of us know the importance of being a healthy weight, but motivating ourselves to make changes and believing we can achieve that magic number is a whole different ball game.

I have always known that I was overweight and out of condition but was never really motivated to do anything about it. For me the motivation to act came from the results of a blood test I had at my GP's last Spring. It showed that I had a HbA1C of 47 (48 is classed as being diabetic and requires medication). This was a wake up call for me and the first thing I did was look at my diet. I looked at what I was eating and discovered that I was eating too many simple carbohydrates in cereal, rice and pasta (I have always eaten wholemeal bread). I cut out the cereal at breakfast and just started to have grapefruit in natural juice (not syrup) for breakfast. When I do have pasta and rice, I now have wholegrain varieties. I also cut down on the portion size I was eating. I always considered that I had a healthy diet, plenty of fruit and veg, fish and not too much meat (my wife is pescatarian so I tend to eat what she cooks for herself). However, by looking more closely, I found that I could make some small, subtle changes that helped me to lose over a stone in weight. I was 16 stone (101kg) and managed to get down to  15 stone (95kg) just by changing my diet.

However, my weight loss began to stall and I found that I was stuck at around 15 stone. I realised that diet alone was not going to get me down to a healthy weight, I had to confront the E word. Exercise is something that I had avoided for years. I had tried joining a gym but found the exercise machines and programmes extremely boring and I was never motivated to keep it up. I had to find something that I enjoyed doing that would help me lose weight. It was completely by chance that I saw an item on the local news about a football league in Rotherham designed exclusively for overweight men. I used to play football in my 20's (over 30 years ago)  and this news article immediately struck a chord with me, so I enquired.

I joined the league in August 2108 as part of a new team. We play for half an hour every Friday night and have fun and meet a group of men who are all trying to achieve the same thing. It is also extremely competitive, not just on the pitch but also on the weigh in. At the weekly weigh in I always feel an extra buzz if I have lost weight and a sense of disappointment if I haven't.  By filling in my book with food and exercise it focuses my mind to keep active and healthy. I have also valued the advice that I have had regarding my diet from yourself and your team.

I also realised that it will be difficult to lose weight just by playing football for half an hour a week. I downloaded an app on to my phone called Couch to 5. This is a running app that gradually helped me to run longer distances as I improved my fitness and lost weight. Without ManvFat it is unlikely that I would have ever started running. I needed the motivation to lose weigh, not just to help myself, but also to help my team. I now go running 3-4 times a week.

At my last weigh in I was 83.2kg (13stone 1lb). I have lost very nearly 3 stone overall and 2 stone since I joined ManvFat football. In August last year my blood sugars were 8.2, when I measured them last month they had come down to 5.4. Looks like I won't be needing the Metformin after all:))

My target was to get below 13 stone and I am very nearly there. I successfully completed Dry January as well last month. It is about a complete lifestyle change, not dieting for a few months then going back to old habits I would like to thank yourself and the ManvFat community for helping me achieve my target.

We’re honoured to have been part of Steve’s journey and we can’t wait to help more men invest in their future.

If you would like to join the 60+ men who are benefitting from Man v Fat Football  in Rotherham sign up at www.manvfatfootball.org/rotherham 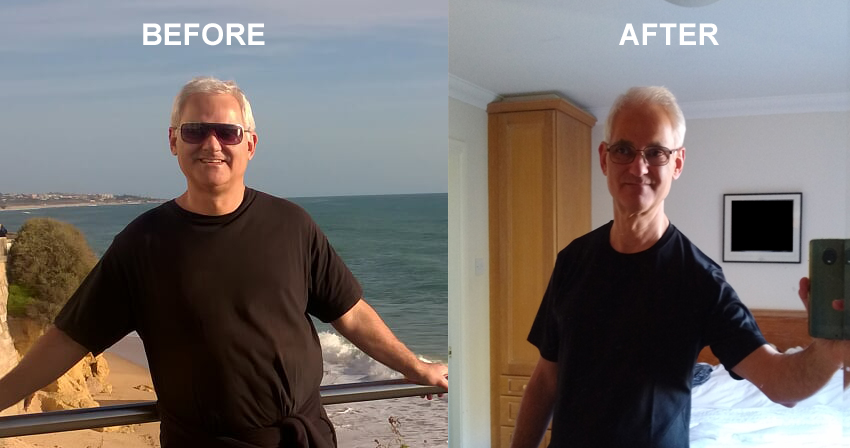