Rotherham United manager Paul Warne is urging everyone associated with the club to come together for one last big effort ahead of tomorrow's hosting of Birmingham City.

The Millers were dealt a blow to their Championship survival fight on Good Friday, but Warne knows a positive result tomorrow could once again throw the battle wide open going into the closing stages of the campaign.

Fans have been encouraged to create a sea of red replica shirts on what is expected to be a warm Bank Holiday Monday, and Warne knows that every inch of support is crucial if his side are to take the fight to the wire.

He told www.themillers.co.uk: "We can only control our game, we need to focus on doing that and see what happens elsewhere. I know that the weather is good, everyone has been encouraged to wear their home shirt, past or present, so hopefully the players will come out to a sea of red and that can help us get some points that we really need. 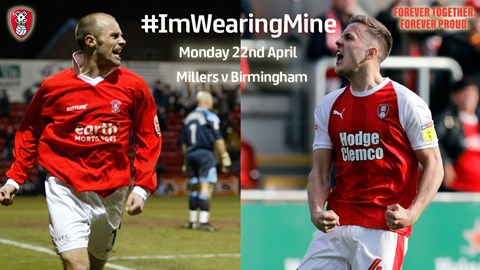 "If you have a Rotherham home shirt, come down in it, whether this seasons or one from the past. It will really make the game even more of an occasion than it already is. We really need that extra home support."

The Millers host a Birmingham side who saw their play-off push dented by a points deduction, but their recent results have also seen Garry Monk's side pull away from the prospect of a late relegation fight.

Warne admires the job done by the former Swansea and Leeds boss, but says his side will be putting everything they possibly can into the contest, as the Millers go in search of some vital points.

Warne added: "It will be another tough game against a good side. They have obviously had points deducted so they are in a false position. They are still playing with fire in their belly, and I have to say I think that Garry Monk has done a great job in difficult circumstances.

"They have good quality throughout their side, so it'll be tough but again we'll be putting everything out there that we possibly can to ensure that we keep the fight going. We won't give up, the players have a real desire to fight and scrap for every last point, and we intend to continue with that attitude right until the end."