Striker Michael Smith says the Millers must utilise the feel-good factor coming from their display at Stoke, as Paul Warne’s side begin their Easter double-header with a trip to Swansea tomorrow.

Smith, who has netted twice in his last three games, is again expected to lead the line as the Millers look to boost their Championship survival hopes against Graham Potter’s Swans.

After coming from 2-0 down at Stoke to earn a priceless point last Saturday, Smith says the dressing room retains the correct belief that they can achieve their survival goal, but with just four games remaining, the ex-Swindon marksman is aware of the heightened importance of results over the Easter weekend. 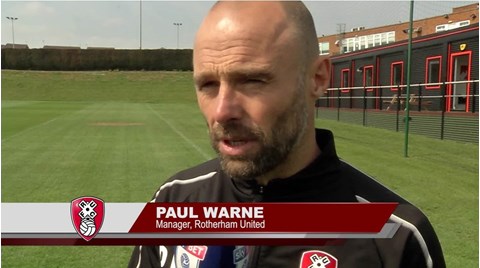 FREEVIEW | Millers in good fettle ahead of Easter weekend - Warne

The Wallsend-born ace told www.themillers.co.uk: “We go into the game full of confidence after the performance against Stoke. We have to believe in ourselves.

“We need one more big effort from everyone now. It is crunch time now and we need to look at every game and think we have to go and try and get maximum points. These next games for Easter will be no different.

“We have two games in quick succession, and then really quickly you know that there are only two games left. We really are now at that time when momentum changes quickly. The season has flown by, but we have given ourselves a fighting chance when a lot of people outside of the club wouldn't have at this stage of the season.”

The Millers travel to South Wales for their first league meeting at The Liberty Stadium since 2006, when both sides played out a 1-1 draw in a League One fixture.

Warne’s side came away with three points in the reverse fixture between the two sides earlier in the season at the AESSEAL New York Stadium, when a second-half brace by Ryan Manning earned all three points back in November.

Swansea have enjoyed a solid home record this season, losing just five times, but their three-match winning streak came to an abrupt halt last weekend after a 4-0 defeat away at Queens Park Rangers.

Whether home or away, Smith believes at this stage of the season records count for little, stating the competitive nature of The Championship makes outcomes hard to predict.

He added: “I think on your day, in this league, anyone can beat anyone. We have seen that, especially in recent weeks with some of the results. We beat Swansea on home soil, so we know we have it within us.

"It is another massive game for us. We know all about Swansea, and what their strengths are, they are a very good side. We need to concentrate on ourselves though, and make sure we give it our best shot.

“We know we are capable of scoring goals away from home, we have to build on what we produced at Stoke. Swansea are an excellent team, but QPR stuck four past them recently so we know they are beatable.”