SUMMER recruit Kyle Vassell has pledged to enjoy every moment of his Championship experience with the Millers, as they look to cement their place in England’s second tier this term.

The Milton Keynes-born striker spent the formative years of his footballing career on the non-league scene before catching the eye of Millers boss Paul Warne following his goalscoring exploits at his former club, Blackpool.

Warne made no secret of his delight in acquiring the services of Vassell and his defensive colleague Clark Robertson – with the duo swapping the seaside for Rotherham’s Championship adventure in the close season. 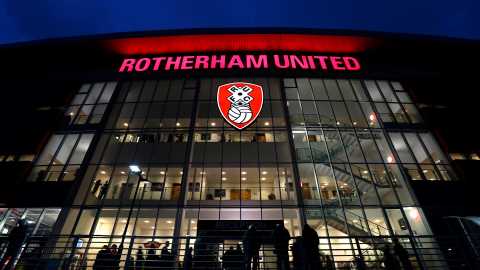 Vassell admits that he is keen to make the most of his Championship opportunity, but remarks that he and his side cannot afford to have any kind of inferiority complex as they go toe-to-toe with the best that the division has to offer.

“I just want to enjoy it. That’s all I want to do,” Vassell insisted.

“A lot of players are getting moved into the Championship from League One and League Two, so the step is not as big as you think but you also have to respect the Championship.

“There is little difference in the pace of the game but the quality is one of the differences, and decision-making is one, definitely, I’d say.”

Despite being in the early stages of his Rotherham career Vassell has certainly bought into the team ethos cultivated by the club’s coaching staff, by hinting that the closely-knit nature of the Millers squad will serve his side well over what is sure to be a testing Championship campaign.

“I knew a couple of the boys when I came in which has helped. I just want to play football so playing is good enough for me.

“It’s all about the boys being a team and being close as a squad and the gaffer would not have it any other way.”

With the majority of Championship outfits deciding to employ five players in the make-or-break midfield areas, Warne has often opted for Michael Smith to lead the Rotherham line – with Vassell’s appearances to date, often in the wide areas in support of Smith.

“I’ll play anywhere for the team, especially if we win,” Vassell said tongue in cheek.

“When it goes up to him (Smith), you know the ball is going to stick so you can gamble off him and make your decisions accordingly, so it’s good to play off him.”