Rotherham United boss Paul Warne admits his side won’t need any motivational aids ahead of Saturday’s game with Sheffield United, stressing his players know the importance of the fixture.

The Millers host their first South Yorkshire derby of the season when Chris Wilder’s Blades arrive at the AESSEAL New York Stadium for a 12.30pm kick-off.

Warne has been building up preparations since Monday, and today welcomed back the likes of Semi Ajayi and Marek Rodak following their stint away for international duty.

With emotion likely to be high in the near capacity crowd, Warne says he has to be careful not to over-motivate his troops, as he looks to plot a course aimed at extending the Millers’ five-match unbeaten run. 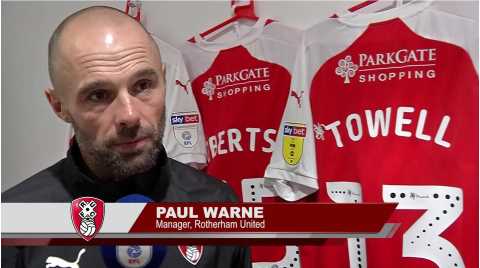 “They don't need to be told that Sheffield is on their doorstep, even they are quite good at geography, so I know that they get it,” Warne told www.themillers.co.uk

“More often than not for these games, the lads will need calming down a little rather than revving up. A local derby on home soil is usually enough to have everyone ultra-motivated."

The Millers have enjoyed success on home soil this season, capped by a sensational comeback victory over Swansea City in their last outing at the AESSEAL New York Stadium.

But Chris Wilder’s Blades also boast an impressive record on the road so far this season, as they look to maintain their push for a top-six position.

“The lads feel gladiatorial at home, they always feel in a good place, so we may build it up slightly as the week goes on but initially it is all about learning and getting the message across of how we want play in and out of possession of the ball, and what we really need to do to try and get at them.

“As the week progresses it may be a little more emotional, but with some players if I show them clips of games gone by, and how important the game is, then they could get too motivated and it might have an effect on their performance.

“It is about finding the balance. If we see that the intensity in training drops a little, then that's when we'll interject. If it doesn't then we'll prepare the lads just like any other game.”

Saturday’s televised encounter is the first time the two sides have met in league action since 2013/14 season.