The new wave of Young Lions are about to roll out the red carpet for Europe’s best and West Bromwich Albion’s Rayhaan Tulloch expects to enjoy even more home comforts than most.

The 17-year-old forward is hoping to be part of the England squad that will be going for glory in the 2018 UEFA European Under-17 Championship held on these very shores, kicking off on Friday, May 4.

Rotherham’s AESSEAL New York Stadium, the Proact Stadium in Chesterfield, and the Pirelli Stadium, Burton, are among the six venues hosting some of the world’s most talented teenagers but the Banks’s Stadium in Walsall, where England are due to face Italy in Group A on Bank Holiday Monday May 7, could provide local lad Tulloch with a moment to savour. 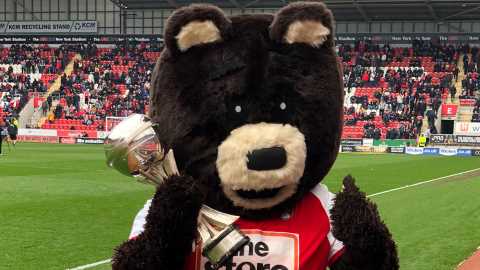 READ | Miller Bear gets his paws on Euro 17 Trophy

“It’s exciting because one of the games is at Walsall and that’s where I live. It’s my hometown so, if selected, hopefully my friends and family will come down,” said the Baggies youngster, who was named on the bench for a Premier League clash with Swansea City in December.

“It would mean a lot, especially for my mum (Judith) – going from taking me to football when I was nine to watching me play on the international stage now I’m 17.

“It’s a huge stage to get yourself out there and show everyone what you can do.

“There’ll be a lot of support. If we get the fans behind us and get some momentum, we can dictate games. Maybe, if we get an early goal, we can start revving them up and get our mojo much quicker.

“It’s very different, coming together with a lot of top players from across the country, but I think we can overcome the other nations and bring home the win.”

Tickets for the Italy game are priced just £5 adults and £2.50 concessions.

Tulloch has already notched at the Banks’s Stadium this term, scoring for West Brom’s Under-21s in a Checkatrade Trophy clash against League One Walsall.

With the England Under-17s losing to Spain in the 2017 edition of U17 Euro before going on to triumph at the Under-17 World Cup in India, this is an opportunity for the Young Lions to announce themselves on the big stage, in the style of Manchester City’s Phil Foden or Liverpool’s Rhian Brewster. 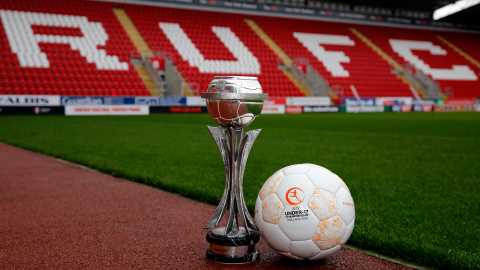 While injury may have restricted England hitman Daniel Sturridge to a smattering of appearances during his loan move from Liverpool, he has made a lasting impression on Tulloch on the West Brom training ground, bolstering the Young Lion’s desire to mould his game.

“Sturridge’s finishing – it’s so good,” said the England Under-17 ace. “He’s a quality player. In five v five in training, he’ll receive it from our goalkeeper, run a little bit and then have a long shot, and it always goes in – I don’t know how!

“I watch the way he finishes. It’s not always power finishing. It’s smart finishing that takes years of practice.

“U17 is a big stage. (Paul) Pogba, (Wayne) Rooney, (Mario) Gotze – they all played in this and look what they’re doing now. Everyone aspires to be like them.”

See the stars of tomorrow in the UEFA European Under-17 Championship, 4-20 May 2018. Visit www.THeFA.com/U17Euro for tickets and further information.