At our recent South Yorkshire derby fixture against Doncaster Rovers, a handful of lucky young people who graduated from the National Citizen Service (NCS) programme in the summer of 2017 here at Rotherham, joined us to raise awareness of the amazing opportunity for 15-17 year olds that is NCS.

Rotherham United Community Sports Trust (RUCST) organised for the graduates to get pitch side before kick-off and help launch the NCS Matchday Takeover in front of a sell-out crowd. The graduates also got the chance to be amongst the players during the warm up and enjoyed complimentary tickets to a thrilling game which saw Rotherham clinch a last-gasp winner to claim all three points and make it seven wins on the bounce.

The event, which was supported by Rotherham United Football Club and Rotherham United Community Sports Trust, was part of a wider EFL Trust campaign that sees NCS Matchday Takeovers reach over 30 EFL and Premier League clubs across the country, highlighting the positive work that young people have done in their local communities. In 2017, NCS Matchday Takeovers reached over 3 million people, with over 500 football players across the country celebrating NCS and the young people that had given back to their local communities.

NCS graduate Casey Holmes from Rotherham had the opportunity to interview Rotherham United first team player and NCS Ambassador Ben Purrington. After the pre-match interview, Casey said: “It was an amazing experience to interview Ben and share the same passion for NCS, it was refreshing to hear a professional footballer say they would have 100% took part in NCS if it wasn’t for his involvement in a professional football setting at the time of his opportunity.

“Through the programme I met a variety people from different backgrounds who have taught me a lot about the wonderfully diverse society we live in. I’ve overcome so many obstacles along the way that have allowed me to essentially go on to bigger and better things. I hope the NCS Matchday Takeovers help inspire fellow young people to get involved and help benefit their futures!” 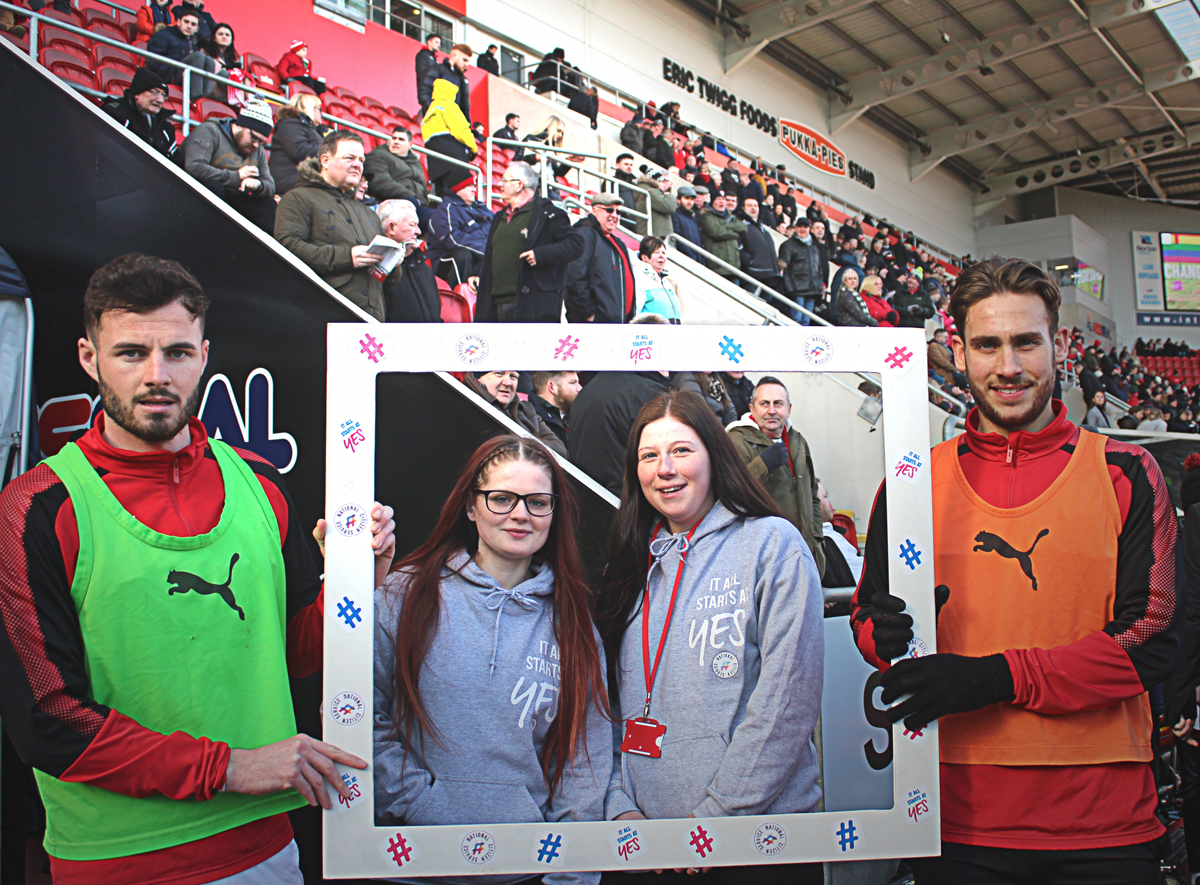 NCS is a government backed, youth development programme that challenges, develops and upskills young people aged 15-17, readying them for their next steps in life. Almost 400,000 young people have completed the NCS programme to date, giving up an incredible 11.7 million hours to social action projects since NCS started. RUCST have engaged with over 2,000 young people since 2011 and are an ever-expanding LDP who will be taking over 700 young people alone this summer.

Defender Ben Purrington is a huge supporter of the NCS programme: “I thoroughly enjoyed Saturday as it’s always a pleasure to meet such an inspiring group of young people and hear about the great things they have accomplished on NCS.

“It’s an absolute honour to be chosen as the NCS Ambassador for Rotherham United Community Sports Trust as this brilliant programme gives young people the chance to experience a variety of activities and challenges whilst building new friendships and benefiting the local community. Ultimately, NCS lays a solid foundation for young people to confidently progress and achieve whatever their future aspirations are.”

If you are aged 15-17 and want to be involved in this amazing, once-in-a-lifetime experience you can sign up online at www.ncsyes.co.uk. Make sure you contact the NCS team first at Rotherham United Community Sports Trust by emailing ncs@rotherhamunited.net  or calling 01709 827767. Ask to speak to a member of the NCS team for the £15 discount code in order to get this incredible experience for just £35!