SKIPPER Richard Wood was quick to express his pride at leading in-form Rotherham United into battle after the recent unbeaten run could only be halted by the wintry blast.

Tomorrow’s scheduled visit to Gillingham is one of several sporting events to fall foul of the heavy snow and sub-zero temperatures.

Following the departure of fans favourite Lee Frecklington in the January transfer window, Wood was asked by Millers boss Paul Warne to don the armband and the no-nonsense centre-half has certainly relished the added responsibility by producing a series of commanding displays at the heart of the Rotherham rearguard.

Whilst disappointed not to be figuring this weekend, Wood reflected on the recent run, which now extends to 14 matches unbeaten.

“I've had to step in. Frecks was brilliant for this club but players move on as they always do. I've enjoyed this last month or so. It's a proud moment for me. I've been skipper at all the clubs I've been at, apart from Charlton.

“That's the sort of player I am, solid and dependable. I try to lead and organise everybody. I want to bring the lads on because they have got great ability. I just want to guide and help the lads show what they can do.”

Wood’s central defensive partnership with Semi Ajayi has been one of the key components in Rotherham’s eye-catching unbeaten run, which has seen the Millers go from League One mid-table obscurity to knocking on the door of the automatic promotion places.

With the Millers looking a transformed outfit defensively following some early season deficiencies, the former Sheffield Wednesday and Charlton Athletic defender believes that all the members of the Rotherham back-line, who have shut out the opposition in four out of their last seven games, are reaping the rewards of getting regular games under their belt. 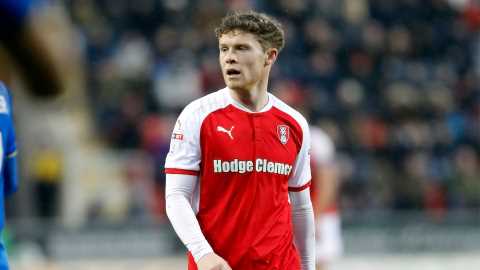 "It's going well. Everyone has got trust in each other,” Wood enthused.

“It's a settled back-four and team in general, and that's what you need. Semi's been outstanding. Josh (Emmanuel) is young but he's learning quick and now he's got a run of games, he's doing very well. Joe (Mattock) is consistent for us and hopefully I bring a calming influence in organising. Marek (Rodak) is young but he's coming into his own. It always helps when you are winning because the confidence builds. We are looking strong.

"In League One, it's tough to start with but when you have a run of games as a young lad, it makes a big difference. I've been there and you need that run of games. That's what football is all about. It's a confidence thing. It just keeps building and building and all the players are showing what good players they are.”