Millers boss Paul Warne reflected on his side’s performance after a 1-0 win over Portsmouth at the AESSEAL New York Stadium.

Speaking straight after seeing his side go eight matches unbeaten, Warne said: “I thought my team were excellent today. I thought, first half, we were the better team but we weren’t incisive enough. We didn’t put enough crosses in the box and we discussed that at half-time.

“We tried to change it and upped the tempo a little bit. The lads gained confidence from that. I thought our second-half performance merited a win. Goodness knows how many corners we had, we must have had 15! It didn’t seem to drop to the right person at the right time. 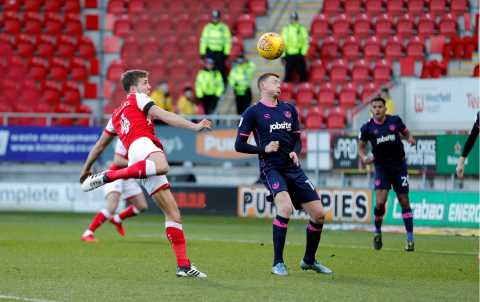 Match report for Rotherham United vs Portsmouth on 20 Jan 18

“There were some really good performances today, which makes me really proud. The three subs who went on today all had a massive impact. The changing room was bouncing in there, they’re a really close group and were pleased to get the three points.

“First-half we didn’t do things quick enough, we didn’t move the ball quick enough. When we got it out wide we were looking for the perfect cross as opposed to just making them defend. We were much better in the second half and got much more crosses in. We had a real go at them.”

Joe Mattock powered home a last-minute header to win the dominant Millers all of the points against Pompey.

Warne continued: “Joe Newell came on – I thought Willo (Ryan Williams) had a great game – but I just wanted something different. Him and Mattock were putting loads of balls in. I thought Smudge (Michael Smith) for his home debut was excellent. We’re working with him all the time and trying to get him to be the best he can be. I felt he was a real handful.

“The most pleasing thing for me is Joe Mattock, our left-back in injury-time scoring the winner. It shows how much the lads want to win and how fit and determined they are. So, it was good scenes at the end of the game for sure.

“I think the fans appreciate how we played today. Even though there was a couple minutes injury time, I didn’t see many people leaving. Even if it would have been a 0-0 I think the fans would have appreciated the lads’ efforts. They tried everything they could, threw the kitchen sink. Credit to Portsmouth, they defended really well.

“In fairness, I thought we deserved the win.”

The Millers boss spared a word on home debutant Michael Smith, whose cross Mattock turned home at the death.

“It’ll take a few weeks to get the most out of him,” continued Warne. “As in like the way we play, the tempo we have and training demands we give him. The coaches are doing a lot of work with him to build him up to be a real threat.”

The Millers are back in action on Tuesday night for what’s sure to be a cracking Yorkshire derby under the lights against Bradford City.