DEFENDER Joe Mattock insists that his Rotherham United side will need their “A-game” when they make the trip to fellow play-off contenders Scunthorpe United on Saturday.

The Millers go into the Glanford Park clash in good heart following an unbeaten run of 10 games, which has seen Paul Warne’s men go from mid-table obscurity to embedding themselves within the League One play-off berths.

In a clash of two of the divisional heavyweights, Mattock is hoping his side can lay down a marker in what is sure to be a red-hot atmosphere in North Lincolnshire.

“We want to get the win, but if we are not to win, we will take a point because they are a good side,” Mattock insisted. 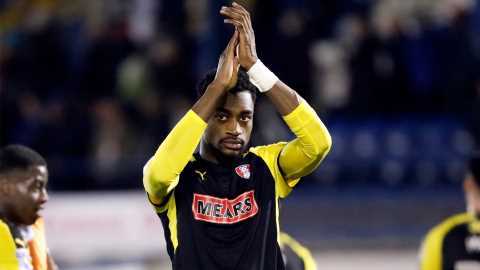 “Last weekend the results went for us. We’ve just got to keep pushing on and ideally, we want to close the gap on Scunthorpe by getting the win.”

With the Millers roared on by a sell-out crowd of around 2100 travelling supporters, Mattock admits that the local derby is a proverbial six-pointer as both sides look to consolidate their positions in the top-six.

With Warne’s men claiming seven victories out of their last 10 games, Mattock insists that his side, and their army of supporters, can make the short hop over the M18/M180 with a quiet confidence that they can extend their impressive run of form of late at the expense of one of their promotion rivals.

The Millers have found the ideal blend in recent weeks, with new look partnership David Ball and Michael Smith proving a hit in front of goal, which was best emphasised by both players finding the net during the Millers’ 2-0 victory over AFC Wimbledon, while commanding a new found resolve in the defensive areas of the pitch, by notching three clean sheets in a row.

Speaking ahead of the eagerly-awaited clash, Mattock hinted that attack could prove to the best form of defence as the Millers look to negate the attacking threat of the Iron, who boast former one-time Rotherham loanee Josh Morris among their ranks.

“Scunthorpe will be a tough game, especially away from home,” Mattock warned.

“I think we'll need our A-game for that. They will be fearing us because we will go there with high energy and will press them from the start and we've going to put it on them. We are not going to sit behind the ball. We are going to take it to them and if we do that then I'm confident that we will have too much for them.”