Millers Manager Paul Warne gave his thoughts to the press after seeing his side defeat Wimbledon 2-0 at the AESSEAL New York Stadium.

It’s now 10 games unbeaten for Warne’s men, who defeated the Dons thanks to goals from Michael Smith and David Ball.

“I’m pretty pleased,” said Warne. “I think we’ve played better but we thoroughly deserve the win. I felt we started the game really well. It took about 15 or 20 minutes before our ‘keeper touched it. So, we did start really well. We pressed, got the ball back and created chances. It’s nice to see Smudge (Michael Smith) score another goal today. I’m pleased for him and I just thought we started the game well and it sort of went a bit flat. We had a ten-minute flat spell then it picked up again before half time. 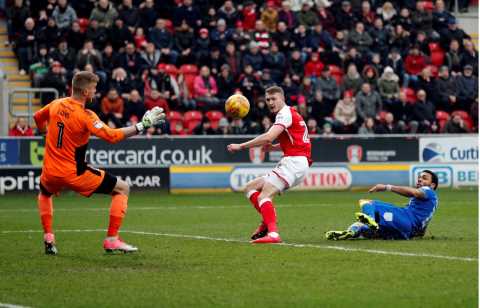 “Second-half, in fairness to Wimbledon they threw the kitchen sink at us. There were throw-ins and corners and they were trying to get it in the box as many times as they could. It was just about getting the second goal. We got one really late. I don’t think 2-0 flattered us, we had enough chances to win comfortably but it was a difficult day at the office.

“There’s some real experience in that team. They’ve been together a while as well and you can tell they all know what each other’s doing. Trotter caused us problems by going into our back-four from long balls forward. I thought they were a constant threat but they knew that. I said to the lads before the game I felt they were a better team than Portsmouth and a better team than Bradford. They’ve got a little bit of everything and I thought before the game it might be a 1-0 and it might come down to set-piece.

“It’s nice for Bally because he works tireless, as does Jerry (Yates) when Jerry plays. For him to get a tap-in was good but I thought Semi is playing really well. I’m really pleased with him. The two central-halves played really well. The back four can be pleased. What gives me great delight is when we were under pressure from a couple of corners and free-kicks, my goalkeeper comes and punches one on the edge of the box and all the back four really appreciate that.”

The Millers had to re-jig the midfield after Richie Towell was deemed unfit following a knee problem, opening the door for new signing Matt Palmer to make his first Rotherham appearance.
Warne hailed the impact of his new arrival, stating the competition for places is as good as it has been all season.

“It just felt a good place to be today,” he added.

"The fans are really starting to believe in the lads and there’s the same faces turning up every week to get in the team. Richie Towell, unfortunately, wasn’t able to play today and he’s been a big part of it. Matty Palmer steps in for him and Richie will be desperate for his place back. He injured his knee on Tuesday, had treatment Tuesday and Wednesday then trained really well Thursday. On Friday he pulled out and he’s been for a scan. We got the results back and it’s really good, he’ll probably only be out for about a week. With any luck he’ll be able to train in the latter part of next week.

“There’s a lot of positives to take. Another win, another clean-sheet and I think the results went kindly for us. We’ll just keep rocking on.”