Boss Paul Warne says his Rotherham United players fully understand the impact of what a positive result will have on the supporters this weekend.

Warne takes his side to Hillsborough to face Sheffield Wednesday tomorrow knowing he will back backed by a large away following as the Millers gear up for their second South Yorkshire derby of the season.

The former striker is putting final preparations in place ahead of tomorrow’s showdown, as he looks to replicate the ground work which resulted in the positive display recently against Sheffield United.

Warne admits that the encounters against local rivals do have a little extra riding on them, and he emphasised that his players, many of which are playing in Rotherham-Sheffield Wednesday encounter for the first time, know the boost of what a positive result can do for their season. 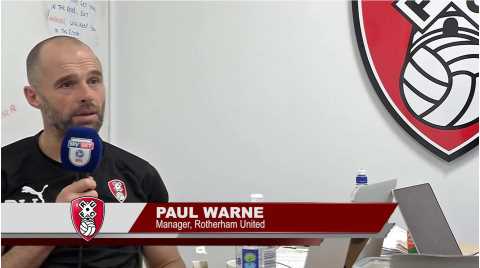 “Leading up to the game from a players point of view you are just concerned about whether you are in the team or not,” Warne told iFollow Millers.

“Then when you get to the stadium, you get changed then the game kicks off and you can really appreciate that it is a little bigger than other games. If you are fortunate enough to come away with a positive result then you can see the effect that it has on everyone. We are taking a decent following, they have been excellent and they deserve a win. I don't want to wait on the Manchester City game as our first away win, we need some before then and hopefully it can be this weekend.”

After taking the game to Sheffield United in the Millers’ first South Yorkshire derby of the season, Warne’s side were unfortunate not come away with maximum points.

The showdown with the Blades culminated in a 2-2 draw, but Warne knows that being away from the AESSEAL New York Stadium will make tomorrow a different game, and he has briefed his troops on what they can expect from their local rivals.

“Sometimes you have to ride the storm a little as the away team,” he added. 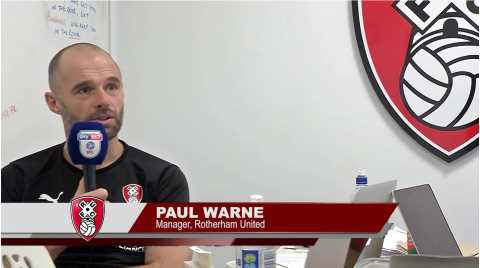 FREEVIEW | The lads know what it means

“At Norwich for the first six minutes we didn't touch the ball, but in the next 10 minutes after that we could have been 2-0 up. There is always emphasis on the home side to grab the game by the short and curlys, so no doubt they will come at us and we have to try and ride that and then really take the ball back at them. We have pace, athleticism and enthusiasm throughout the team, so we look forward to the game and trying to get a really positive result.”

Warne also spoke of his admiration of his opposite number after admitting a shared love of Ice Hockey has ensured a number of chats with Owls boss Jos Luhukay.

“We have a mutual friend so I have had a couple of coffees with Jos and his staff,” he continued.

“They are really good football people. They have loads more experience in the game than we have, so we have massive respect for them. I have seen them a few times. I went to the Sheffield derby, I saw them against Milwall, Richie (Barker) saw them against Ipswich and I also saw them play Nottingham Forest. I have seen them live a lot, and they have definitely got some players who can cause damage. They have some youth in the team now which they possibly haven't had over previous years. We need to make sure we are at our best, and we also have a lot of threats ourselves so I also know that we can cause problems.”