CHAMPIONSHIP victories may been elusive for the Millers in recent outings, but full-back Joe Mattock insists that no-one can doubt his side’s character as they look to drag themselves away from the lower reaches of the Championship table.

Paul Warne’s side have arguably, become the division’s draw specialists after claiming a share of the spoils in eight out of their last 10 league games, most latterly in last weekend’s home fixture with Reading. Many football aficionados may highlight the side’s lack of killer instinct in putting teams away from winning positions, but Mattock points to the flip side of this by suggesting that the Millers have become a tougher nut to crack, as they have fought back from adversity to pick up the unlikeliest of points against all odds on a number of occasions.

Mattock admits that his side’s new found resolve and the closely-knit bond of his band of brothers is likely to be tested further during the impending, but notoriously difficult Christmas and New Year footballing schedule.

“There’s a lot of character in this team,” Mattock enthused.

“What the gaffer and the coaching staff have done in the last two years is unbelievable. They have got a good group of players, not just on the pitch but off the pitch as well. It’s great to be in and around the training ground and you have players that want to be in and around each other. When you have got that team ethic, there is not much that can go wrong. Obviously, a draw is better than a loss and it’s good to keep racking up those points.”

The cornerstone of the Millers’ Championship campaign to date has been their impressive ability to pick up points on their AESSEAL New York Stadium patch. With Hull City the only side to breach ‘Fortress New York’ with maximum points, Warne’s side have claimed the scalps of Derby County, Ipswich Town, Millwall and Swansea City in the first half of the season. 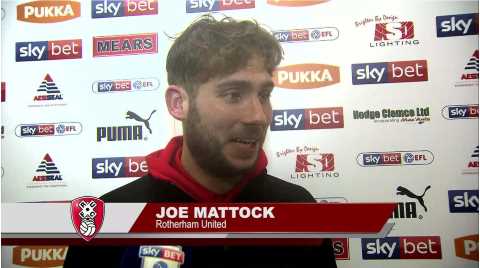 Mattock revealed that part of the Millers’ game plan on their home turf is to ensure that their Championship opponents find it as hard as possible to settle into the AESSEAL New York Stadium surroundings, by being quick out of the blocks. With Warne’s side priding themselves on their fitness levels, Mattock insists that his side, who often employ a five-man midfield, have an uncanny knack of swamping their visitors from the off by giving them as little time as possible on the ball.

“Our home record speaks for itself,” Mattock added.

“We are a very good home team and we know that even when we play the best teams on our home pitch, we can outplay them. Teams can come a little unstuck because they don’t expect us to come out on the traps as quick as we do and if we keep doing that there’s nothing to stop us in the games to come. We have the quality in the team to win a lot more games than we are doing. It’s a slow process and we’ve just got to keep climbing the table.”
Ahead of back-to-back home clashes with the Royals and promotion chasing West Bromwich Albion next Saturday, Mattock readily admits that his side have to continue to make their home ground a tough proposition for visiting teams, if they are to safeguard their Championship status at the first time of asking.

“A big key factor is we are one of the fittest, if not, the fittest team in the league,” Mattock boasted.

“I hold my hand up and I’m not embarrassed to say, that we try and outrun teams at times. That’s a massive factor in our game and we’ve got to keep doing that and do what we do best.

“You’ve got to take it step by step. We’ve just got to have a little belief in ourselves at times. We come up against the top teams and we know that we can compete.”