Millers Manager Paul Warne reflected on his side’s 3-1 victory over Wigan Athletic this evening, which sees Rotherham into the hat for the second round of the Carabao Cup.

“I thought we played all right “, said Warne. “I thought Wigan played really well. So I’m pretty pleased. There were some good performances throughout the team. I thought young Wilesy played really well in midfield. Semi played in a different position tonight. I asked Willo to play in one tonight. I asked Bally to play a narrow, wide-right. So a lot of people played in different positions tonight but I was really pleased with them. 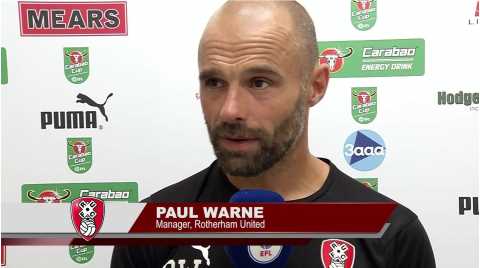 FREEVIEW | Warne's latest on the hunt for a loan signing

“I thought they (Wigan) had more chances than we would have liked. But I’ve got really good coaches who help set out the team to try and stop them, when we’re in and out of possession. When we watch the game back we can be really proud of the effort the lads put in. They all put a massive shift in out of possession of the ball to get into shape.”

The highlight of the night was undoubtedly the return to competition action for striker Jamie Proctor, who marked his comeback with two goals in a man-of-the-match display.

“I’m especially pleased with Procs,” continued Warne. “I thought he led the line really well. We ask our strikers to be reliable and he was definitely that.

“We’re really pleased with him. You could see when he came off the whole bench were clapping him. It’s been a long time out for him and he’s really worked hard to get to this stage. I think he was a bit nervous before the game, understandably so. He definitely didn’t let himself down. To get a brace and ‘man of the match’ against a strong Wigan outfit is respect to him and all my backroom staff who have worked with him." 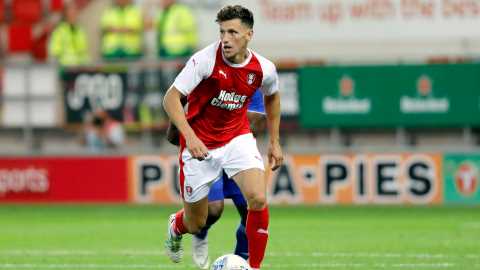 The opening two goals arrived in the space of five minutes, Semi Ajayi making it 2-0 on 42 minutes after Jamie Proctor’s well-taken strike gave the Millers the lead.

“I thought tonight, we were a big size on set-pieces,” said Warne. “We always looked a threat which is really promising. With the way we play, I’m asking a lot from my players to give me Saturday-Tuesday, Saturday-Tuesday. So I need a good sized squad to help us out.

“Generally, I’m really proud of the lads. Because we’ve asked them to play a different way and a lot of played out of position. It’s a good day’s work.

“We’ve definitely got a club spirit here where the lads will give everything for each other. You’re guaranteed that whoever plays Saturday, whoever you’ve got stood at the side of you will work hard for you. It means a lot. I think it’s worth more than two superstars in your team.

“I asked them all to go out and try and get in the first team and a lot have come out with a lot of praise tonight.”