The Millers boss has been busy over the close season adding six new faces to his squad, giving him an early season selection dilemma with everyone set to be given the green light to be in contention for a place at Griffin Park.

Warne has presided over another strong pre-season which concluded with a strong work-out at Mansfield last weekend, as competition intensifies for a starting berth tomorrow afternoon.

“I have a good idea about the way I am going,” Warne confirmed to iFollow Millers earlier in the week.

“All managers know roughly, there might be one tweak, someone might pick up an injury or there might be someone you can tell has just lost his way a little, but generally speaking I know 10 of my 11. I have a great group to pick from so if I change it, then I change it.

“There are no (injury) issues. The majority of the group have trained every day throughout the summer. The new lads who have come in, Sean (Raggett) got a bit of knock actually last weekend, so he didn't train Monday. He has joined in since. Robbo (Clark Robertson) has come in and done really well, so has Vass (Kyle Vassell). They have trained every day.”

Warne has a decision to make in a number of areas, but after the speedy recovery of Bristol City loanee Zak Vyner, he has an unexpected choice to make at right-back.

It looked as though Vyner could be set for a spell on the sidelines after a suspected groin problem, but after making rapid progress behind the scenes, the 21-year-old is ready to challenge fellow newcomer Billy Jones for a full-back slot. 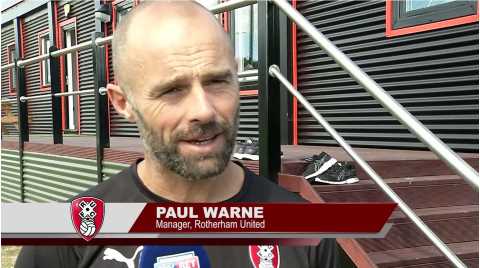 “When we were in Austria the initial prognosis was that he had done a grade two tear in his groin,” Warne reiterated.

“It looked as though he would be out for six to eight weeks, but he was back after about eight days! He is supersonic with his recovery speeds. The scan didn't come up with much, which is great.

“Billy Jones has come in and done well. He has done his motivation talk and said that he wants to walk around the pitch at the end of the season and be proud of what we have achieved this year. He has been brilliant. He offers some experience in there for me as well.”

There is a full match preview with Paul Warne on iFollow Millers now. Click here for full details.