MILLERS playmaker David Ball admits that momentum will be the key to his side’s chances of returning to the Championship at the first time of asking.

The AESSEAL New York Stadium outfit are on the verge of securing their berth in the end-of-season jamboree and Ball, who has tasted both jubilation and heartache in the season finale, believes that the Millers have to finish their League One campaign on a high starting with tomorrow’s clash with Bristol Rovers. 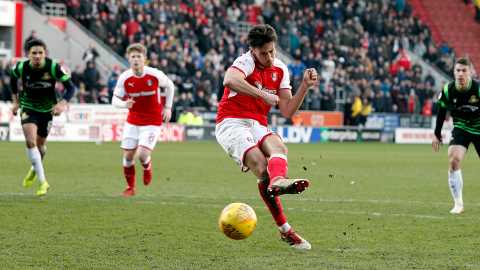 Speaking exclusively to the official website ahead of tomorrow’s game, Ball is hoping his side can extend their season into mid/late May by guaranteeing a top-six position, sooner rather than later.

“We have just got to get ourselves mathematically safe in the play-offs, so that’s all we are working for at the moment,” Ball insists.

“We need to secure our place first and foremost and then we’ve got the semi-finals to look forward to, if we get there. That’s the good thing about this team, we take each game as it comes.

“The most important thing is the momentum going into the play-offs. We need momentum so the quicker we get wins and secure our place the better.”

During the Millers’ last home outing Ball renewed acquaintances with his former club Fleetwood, who travelled to South Yorkshire on the back of an impressive run of form under John Sheridan.

The Millers were given a stern test of their promotion credentials during a five-goal thriller, whereby they overturned an early deficit to take the lead, before being pegged back almost immediately. However, skipper Richard Wood popped up with the decisive winner late on, to turn the game in Rotherham’s favour - much to the delight of the former Manchester City youngster.

“We owed them one from the start of the season. It’s my old team but I just wanted to get three points for Rotherham and get us to where we want to be,” Ball added.

“It’s about winning games at this stage of the season and get the points on the board. We need to get better with our set-pieces but if we tidy those little things up then we will be all right.

“We have to work on things but this shows the character of the team. It’s a great group. The fans got behind us in the second half and there is always goals in this team, all over the pitch. We kept going and going and got what we deserved.

“We keep coming back and winning games when we need to win games. Hopefully, we can go on a little run now between now and the end of the season.”